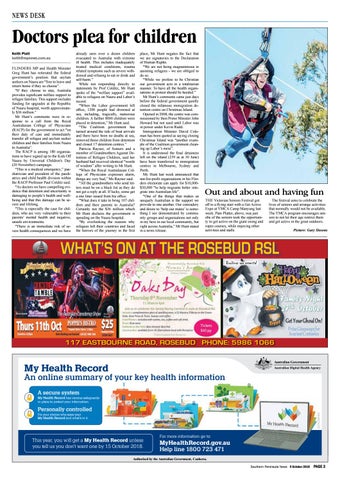 Doctors plea for children Keith Platt keith@mpnews.com.au FLINDERS MP and Health Minister Greg Hunt has reiterated the federal government’s position that asylum seekers on Nauru are “free to leave and return home if they so choose”. “If they choose to stay, Australia provides significant welfare support to refugee families. This support includes funding for upgrades at the Republic of Nauru hospital, worth approximately $36 million.” Mr Hunt’s comments were in response to a call from the Royal Australasian College of Physicians (RACP) for the government to act “on their duty of care and immediately transfer all refugee and asylum seeker children and their families from Nauru to Australia”. The RACP is among 180 organisations to have signed up to the Kids Off Nauru by Universal Children's Day (20 November) campaign. “This is a medical emergency,” paediatrician and president of the paediatrics and child health division within the RACP Professor Paul Colditz said. “As doctors we have compelling evidence that detention and uncertainty is damaging to people’s health and wellbeing and that this damage can be severe and lifelong. “This is especially the case for children, who are very vulnerable to their parents’ mental health and negative, unsafe environments. “There is an immediate risk of severe health consequences and we have

already seen over a dozen children evacuated to Australia with extreme ill health. This includes inadequately treated medical conditions, trauma related symptoms such as severe withdrawal and refusing to eat or drink and self-harm.” While not responding directly to statements by Prof Colditz, Mr Hunt spoke of the “welfare support” available to refugees on Nauru and Labor’s record. “When the Labor government left office, 1200 people had drowned at sea, including, tragically, numerous children. A further 8000 children were placed in detention,” Mr Hunt said. “The Coalition government has turned around the tide of boat arrivals and there have been no deaths at sea, removed those children from detention and closed 17 detention centres.” Patricia Rayner, of Somers and a member of Grandmothers Against Detention of Refugee Children, said her husband had received identical “words of wisdom” after writing to Mr Hunt. “When the Royal Australasian College of Physicians expresses alarm, things are very bad,” Ms Rayner said. “All the grandmothers who send letters must be on a black list as they do not get a reply at all. If lucky, some get a one liner issued from his office. “What does it take to bring 107 children and their parents to Australia? Certainly not the $36 million which Mr Hunt declares the government is spending on the Nauru hospital. “By overlooking the reasons why refugees left their countries and faced the horrors of the journey in the first

place, Mr Hunt negates the fact that we are signatories to the Declaration of Human Rights. “We are not being magnanimous in assisting refugees - we are obliged to do so. “While we profess to be Christian our government acts in a totalitarian manner. To have all the health organisations in protest should be heeded.” Mr Hunt’s comments came just days before the federal government quietly closed the infamous immigration detention centre on Christmas Island. Opened in 2008, the centre was commissioned by then Prime Minister John Howard but not used until Labor was in power under Kevin Rudd. Immigration Minister David Coleman has been quoted as saying closing Christmas Island was “another example of the Coalition government cleaning up Labor’s mess”. It is understood the final detainees left on the island (239 as at 30 June) have been transferred to immigration centres in Melbourne, Sydney and Perth. My Hunt last week announced that not-for-profit organisations in his Flinders electorate can apply for $10,000$50,000 “to help migrants better integrate into Australian life”. “One of the things that makes us uniquely Australian is the support we provide to one another. Our comradery and desire to ‘help our mates’ is something I see demonstrated by community groups and organisations not only in my here in our local community, but right across Australia,” Mr Hunt stated in a news release.

Out and about and having fun THE Victorian Seniors Festival got off to a flying start with a Get Active Expo at YMCA Camp Manyung last week. Pam Platter, above, was just obe of the seniors took the opportunity to get active on the giant swing and ropes courses, while enjoying other activities and stalls.

The festival aims to celebrate the lives of seniors and arrange activities that normally would not be available. The YMCA program encourages seniors to not let their age restrict them and get active in the great outdoors. Picture: Gary Sissons