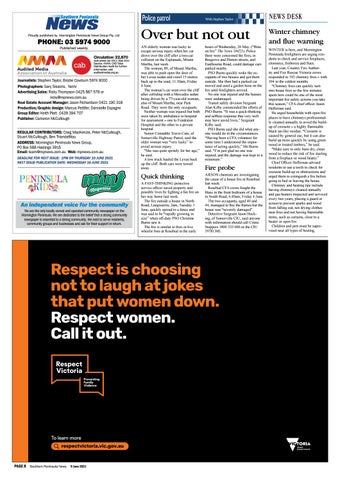 Over but not out AN elderly woman was lucky to escape serious injury when her car drove over the cliff after a two-car collision on the Esplanade, Mount Martha, last week. The woman, 89, of Mount Martha, was able to push open the door of her Lexus sedan and crawl 15 metres back up to the road, 11.30am, Friday 4 June. The woman’s car went over the cliff after colliding with a Mercedes sedan being driven by a 77-year-old woman, also of Mount Martha, near Park Road. They were the only occupants. Neither woman was injured but both were taken by ambulance to hospital for assessment – one to Frankston Hospital and the other to a private hospital. Senior Constable Travis Cute, of Somerville Highway Patrol, said the older woman was “very lucky” to avoid serious injury. “She was quite spritely for her age,” he said. A tow truck hauled the Lexus back up the cliff. Both cars were towed away.

hours of Wednesday, 26 May. (“Bins on fire” The News 1/6/21). Police there were concerned the fires, in Besgrove and Hinton streets, and Eastbourne Road, could damage cars parked nearby. PSO Burns quickly woke the occupants of two houses and got them outside. She then had a parked car moved and used a garden hose on the fire until firefighters arrived. No one was injured and the houses were undamaged. Transit safety division Sergeant Alan Kilby commended the efforts of PSO Burns. “It was a quick-thinking and selfless response that very well may have saved lives,” Sergeant Kilby said. PSO Burns said she did what anyone would do in the circumstances. “Having been a CFA volunteer for some time I understood the importance of acting quickly,” Ms Burns said. “I’m just glad no one was injured, and the damage was kept to a minimum.”

ARSON chemists are investigating the cause of a house fire at Rosebud last week. Rosebud CFA crews fought the blaze in the front bedroom of a house in South Road, 6.40am, Friday 4 June. The two occupants, aged 40 and 44, managed to flee the flames but the house was “severely damaged”. Detective Sergeant Jason Hocking, of Somerville CIU, said anyone with information should call Crime Stoppers 1800 333 000 or the CIU 59781300.

A FAST-THINKING protective service officer saved property and possibly lives by fighting a bin fire on her way home last week. The fire outside a house in North Road, Langwarrin, 2am, Tuesday 1 June, quickly spread to a fence and was said to be “rapidly growing in size” when off-duty PSO Christine Burns saw it. The fire is similar to fires in five wheelie bins at Rosebud in the early

Respect is choosing not to laugh at jokes that put women down. Respect women. Call it out.

NEWS DESK Winter chimney and flue warning WINTER is here, and Mornington Peninsula firefighters are urging residents to check and service fireplaces, chimneys, fireboxes and flues. Last year, Country Fire Authority and Fire Rescue Victoria crews responded to 192 chimney fires – with 104 in the coldest months. “Chimney fires can quickly turn into house fires so the few minutes spent now could be one of the most important fire safety actions you take this season,” CFA chief officer Jason Heffernan said. He urged households with open fire places to have chimneys professionally cleaned annually to avoid the buildup of creosote – a highly flammable black tar-like residue. “Creosote is caused by general use, but it can also build up more quickly by using green wood or treated timbers,” he said. “Make sure to only burn dry, clean wood to reduce the risk of fire starting from a fireplace or wood heater.” Chief Officer Heffernan advised residents to use a torch to check for creosote build-up or obstructions and urged them to extinguish a fire before going to bed or leaving the house. Chimney and heating tips include having chimneys cleaned annually and gas heaters inspected and serviced every two years, placing a guard or screen to prevent sparks and wood from falling out, not drying clothes near fires and not having flammable items, such as curtains, close to a heater or open fire. Children and pets must be supervised near all types of heating.