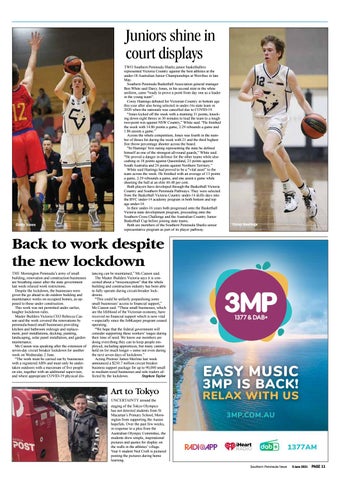 TWO Southern Peninsula Sharks junior basketballers represented Victoria Country against the best athletes at the under-18 Australian Junior Championships at Werribee in late May. Southern Peninsula Basketball Association general manager Ben White said Darcy Jones, in his second stint in the white uniform, came “ready to prove a point from day one as a leader in the young team”. Corey Hastings debuted for Victorian Country in bottom age this year after also being selected in under-16s state team in 2020 when the nationals was cancelled due to COVID-19. “Jones kicked off the week with a stunning 31 points, knocking down eight threes in 30 minutes to lead the team to a tough two-point win against NSW Country,” White said. “He finished the week with 14.86 points a game, 2.29 rebounds a game and 1.86 assists a game.” Across the whole competition, Jones was fourth in the number of threes hit during the week with 21 and the third highest free throw percentage shooter across the board. “In Hastings’ first outing representing the state he defined himself as one of the strongest all-round guards,” White said. “He proved a danger in defence for the other teams while also cashing in 18 points against Queensland, 23 points against South Australia and 24 points against Northern Territory.” White said Hastings had proved to be a “vital asset” to the team across the week. He finished with an average of 13 points a game, 2.29 rebounds a game, and one assist a game while shooting the ball at an elite 40.48 per cent. Both players have developed through the Basketball Victoria Country and Southern Peninsula Pathways. They were selected from the Basketball Victoria Country under-14 skills days into the BVC under-14 academy program in both bottom and top age under-14. In their under-16 years both progressed onto the Basketball Victoria state development program, proceeding onto the Southern Cross Challenge and the Australian Country Junior Basketball Cup before joining state teams. Both are members of the Southern Peninsula Sharks senior representative program as part of its player pathway.

Back to work despite the new lockdown THE Mornington Peninsula’s army of small building, renovation and construction businesses are breathing easier after the state government last week relaxed work restrictions. Despite the lockdown, the businesses were given the go ahead to do outdoor building and maintenance works on occupied homes, as opposed to those under construction. This work was not permitted under earlier, tougher lockdown rules. Master Builders Victoria CEO Rebecca Casson said the work covered the renovations by peninsula-based small businesses providing kitchen and bathroom redesign and replacement, pool installations, decking, painting, landscaping, solar panel installation, and garden maintenance. Ms Casson was speaking after the extension of seven-day circuit breaker lockdown for another week on Wednesday 2 June. “The work must be carried out by businesses with a registered ABN and must only be undertaken outdoors with a maximum of five people on site, together with an additional supervisor, and where appropriate COVID-19 physical dis-

tancing can be maintained,” Ms Casson said. The Master Builders Victoria says it is concerned about a “misconception” that the whole building and construction industry has been able to fully operate during circuit-breaker lockdowns. “This could be unfairly jeopardising some small businesses’ access to financial support,” Ms Casson said. “These small businesses, which are the lifeblood of the Victorian economy, have received no financial support which is now vital – especially since the JobKeeper program ceased operating. “We hope that the federal government will consider supporting these workers’ wages during their time of need. We know our members are doing everything they can to keep people employed, including apprentices, but many cannot hold on for much longer – some not even during the next seven days of lockdown.” Acting Premier James Merlino last week announced a $250.7 million circuit breaker business support package for up to 90,000 small to medium-sized businesses and sole traders affected by the lockdown. Stephen Taylor

Art to Tokyo UNCERTAINTY around the staging of the Tokyo Olympics has not deterred students from St Macartan’s Primary School, Mornington from supporting the Aussie hopefuls. Over the past few weeks, in response to a plea from the Australian Olympic Committee, the students drew simple, inspirational pictures and quotes for display on the walls in the athletes’ village. Year 6 student Ned Croft is pictured posting the pictures during home learning. Southern Peninsula News