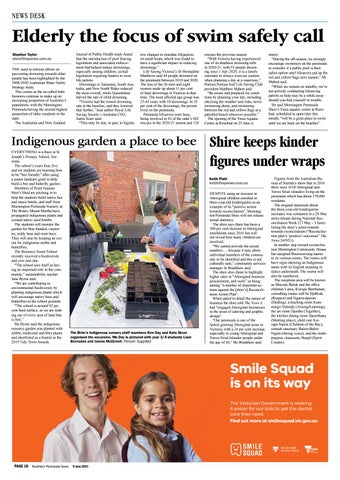 Elderly the focus of swim safely call Stephen Taylor steve@mpnews.com.au THE need to refocus efforts on preventing drowning towards older people has been highlighted by the 2008-2020 Australian Water Safety Strategy study. This comes as the so-called baby boomers continue to make up an increasing proportion of Australia’s population, with the Mornington Peninsula having the second highest proportion of older residents in the state. The Australian and New Zealand

Journal of Public Health study found that the introduction of pool fencing legislation and associated enforcement had helped reduce drownings, especially among children, as had legislation requiring boaters to wear life jackets. Drownings in Tasmania, South Australia, and New South Wales reduced the most overall, while Queensland halved the rate of child drowning. “Victoria had the lowest drowning rate at the baseline, and they lowered that further,” lead author Royal Life Saving Society – Australia CEO, Justin Scarr said. “This may be due, in part, to legisla-

tive changes to mandate lifejackets on small boats, which was found to have a significant impact in reducing drownings.” Life Saving Victoria’s Dr Bernadette Matthews said 44 people drowned on the peninsula between 2010 and 2020. The loss of the 36 men and eight women made up about 11 per cent of fatal drownings in Victoria in that time. The most affected age group was 25-44 years with 18 drownings. In 35 per cent of the drownings, the person lived on the peninsula. Peninsula lifesavers were busy, being involved in 63 of the state’s 602 rescues in the 2020-21 season and 124

rescues the previous season. “With Victoria having experienced one of its deadliest drowning tolls in 2020-21, with 55 people drowning since 1 July 2020, it is a timely reminder to always exercise caution when planning a day at a waterway,” Portsea Portsea Surf Life Saving Club president Matthew Mahon said. “Be aware and prepared for conditions by planning your day, including checking the weather and risks, never swimming alone, and swimming between the red and yellow flags at a patrolled beach wherever possible.” The opening of the Yawa Aquatic Centre at Rosebud on 25 June is

timely. “During the off-season, we strongly encourage swimmers on the peninsula to consider if a public pool is their safest option until lifesavers put up the red and yellow flags next season,” Mr Mahon said. “While we remain on standby, we’re not actively conducting lifesaving patrols so help may be a while away should you find yourself in trouble. He said Mornington Peninsula Shire’s Yawa aquatic centre at Rosebud, scheduled to open later this month, “will be a great place to swim until we are back on the beaches”.

EVERYTHING is a-buzz at St Joseph’s Primary School, Sorrento. The school’s years four, five and six students are learning how to be “bee friendly” after using a junior landcare grant to help build a bee and butterfly garden. Members of Point Nepean Men’s Shed are pitching in to help the students build native bee and insect hotels, and staff from Mornington Peninsula Nursery at The Briars, Mount Martha have propagated indigenous plants and created native seed bombs. The students will monitor the garden for blue banded, carpenter, teddy bear and resin bees. They will also be keeping an eye out for indigenous moths and butterflies. The Resource Smart School recently received a biodiversity and core unit star. “The school sees itself as having an important role in the community,” sustainability teacher Jane Byrne said. “We are contributing to environmental biodiversity by planting indigenous plants which will encourage native bees and butterflies to the school grounds. “The school is around 92 per cent hard surface, so we are making use of every area of land that is free.” Ms Byrne said the indigenous resource garden was planted with edible, medicinal and fibre plants and shortlisted as a finalist in the 2019 Tidy Town Awards.

DESPITE using an increase in Aboriginal children enrolled in three-year-old kindergarten as an example of its “positive action towards reconciliation”, Mornington Peninsula Shire will not release actual statistics. The shire says there has been a 300 per cent increase in Aboriginal enrolments since 2016 but will not reveal how many children are involved. “We cannot provide the actual numbers … because it may allow individual members of the community to be identified and this is not culturally safe,” community services manager Jo Bradshaw said. The shire also chose to highlight higher rates in “Aboriginal business procurement, and work” as being among “a number of important actions against the [shire’s] Reconciliation Action Plan”. When asked to detail the nature of business the shire told The News it had “engaged Aboriginal businesses in the areas of catering and graphic design”. &quot;Our peninsula is one of the fastest growing Aboriginal areas in Victoria, with a 34 per cent increase, especially in young Aboriginal and Torres Strait Islander people under the age of 30,” Ms Bradshaw said.

Figures from the Australian Bureau of Statistics show that in 2016 there were 1618 Aboriginal and Torres Strait islanders living on the peninsula which has about 170,000 residents. The original statement about the three-year-old kindergarten increases was contained in a 20 May news release during National Reconciliation Week (27 May - 3 June) listing the shire’s achievements towards reconciliation (“Reconciliation plan’s ‘positive’ outcomes” The News 24/5/21). In another step toward reconciliation Mornington Community House has assigned Boonwurrung names to its various rooms. The rooms will have signs showing an Indigenous name with its English meaning in italics underneath. The rooms will also be numbered. The reception area will be known as Mayone Buluk and the office children’s area, Kirrups Barrbunun; consulting rooms will be Djilbruk (Respect) and Ngarra-djarran (Healing); a teaching room Kummargii Yulendji (Arising/Learning); the art room Djeetho (Together); the kitchen dining room Djeembana (Meeting place); child care Kirrups Nairm (Children of the Bay); consult sanctuary Balert-Balert Ngulu (Strong voice); and the multipurpose classroom, Bunjil (Spirit Creator).

Smile Squad is on its way The Victorian Government is making it easier for our kids to get the dental care they need. Find out more at smilesquad.vic.gov.au