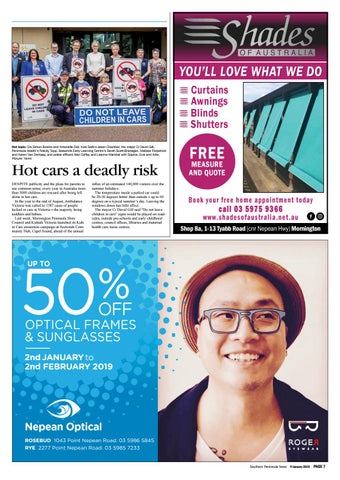 Hot cars a deadly risk DESPITE publicity and the pleas for parents to use common sense, every year in Australia more than 5000 children are rescued after being left alone in hot cars. In the year to the end of August, Ambulance Victoria was called to 1587 cases of people locked in cars in Victoria – the majority being toddlers and babies. Last week, Mornington Peninsula Shire Council and Kidsafe Victoria launched its Kids in Cars awareness campaign at Seawinds Community Hub, Capel Sound, ahead of the annual

influx of an estimated 140,000 visitors over the summer holidays. The temperature inside a parked car could be 20-30 degrees hotter than outside – up to 60 degrees on a typical summer’s day. Leaving the windows down has little effect. The mayor Cr David Gill said “Do not leave children in cars” signs would be placed on roadsides, outside pre-schools and early childhood centres, council offices, libraries and maternal health care nurse centres.