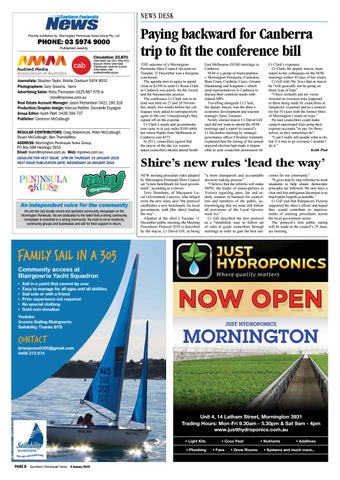 Paying backward for Canberra trip to fit the conference bill THE outcome of a Mornington Peninsula Shire Council decision on Tuesday 11 December was a foregone conclusion. The agenda item to agree to spend close to $1100 to send Cr Rosie Clark to Canberra was purely for the record and the bureaucratic process. The conference Cr Clark was to attend was held on 27 and 28 November, nearly two weeks before her colleagues were asked to retrospectively agree to the cost. Unsurprisingly they signed off on the expense. Cr Clark’s meals and accommodation came in at just under $500 while her return flights from Melbourne to Canberra cost $573. In 2011, councillors agreed that the mayor of the day (or a nominated councillor) should attend South

East Melbourne (SEM) meetings in Canberra. SEM is a group of municipalities – Mornington Peninsula, Frankston, Bass Coast, Cardinia, Casey, Greater Dandenong and Kingston – which send representatives to Canberra to discuss their common needs with federal MPs. Travelling alongside Cr Clark, the deputy mayor, was the shire’s economic development and tourism manager Tania Treasure. Newly elected mayor Cr David Gill said did not want to attend the SEM meetings and a report to council’s 11 December meeting by strategic governance officer Christine Aslanidis explained that the timing of the annual mayoral election had made it impossible to seek councillor permission for

Cr Clark’s expenses. Cr Clark, the deputy mayor, must report to her colleagues on the SEM meetings within 30 days of her return. Cr Gill told The News that as mayor he “will generally not be going on those type of trips”. “I have certainly put my views forward on overseas trips [opposed to them being made by councillors at ratepayers’ expense] and as a councillor for 10 years with the former Shire of Mornington I made no trips.” He said councillors could make council-sanctioned trips using their expense accounts “or pay for themselves, as they sometimes do”. “I can’t really tell people what to do, but if it was to go overseas I wouldn’t do it.” Keith Platt

Shire’s new rules ‘lead the way’ NEW meeting procedure rules adopted by Mornington Peninsula Shire Council set “a new benchmark for local government”, according to a lawyer. Terry Bramham, of Macquarie Local Government Lawyers, who helped write the new rules, said “the protocol establishes a new benchmark for local government, with [the shire] leading the way”. Adopted at the shire’s Tuesday 11 December public meeting, the Meeting Procedures Protocol 2018 is described by the mayor, Cr David Gill, as being

“a more transparent and accountable decision making process”. “I believe that the reforms will make MPSC the leader of municipalities in Victoria regarding open, fair and orderly conduct of business for councillors and members of the public, acknowledging that we must still follow all provisions of the Local Government Act.” Cr Gill described the new protocol as a “simplified, easy to follow set of rules to guide councillors through meetings in order to gain the best out-

comes for our community”. “It gives step by step reference to most situations to help ensure democratic principles are followed. We now have a clear and less ambiguous document in as much plain English as possible.” Cr Gill said that Ratepayers Victoria supported the shire’s efforts and hoped they would contribute to improvements of meeting procedures across the local government sector. The protocol’s first public outing will be made at the council’s 29 January meeting.