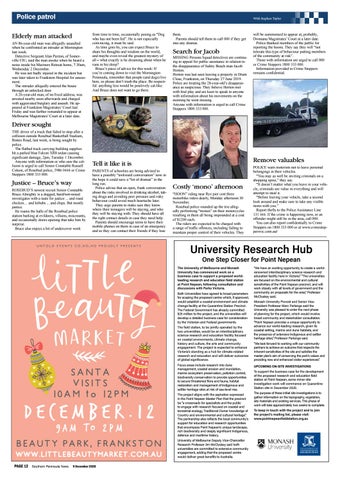 Elderly man attacked AN 86-year-old man was allegedly assaulted when he confronted an intruder at Mornington last week. Detective Sergeant Alan Paxton, of Somerville CIU, said the man awoke when he heard a noise inside his Mariners Retreat home, 7.30am, Wednesday 2 December. He was not badly injured in the incident but was later taken to Frankston Hospital for assessment. The intruder allegedly entered the house through an unlocked door. A 26-year-old man, of no fixed address, was arrested nearby soon afterwards and charged with aggravated burglary and assault. He appeared at Frankston Magistrates’ Court last Friday and was further remanded to appear at Melbourne Magistrates’ Court at a later date.

from time to time, occasionally posing as “Dog who has not been fed”. He is not especially convincing, it must be said. As time goes by, you can expect Bruce to share his thoughts and wisdom on the world, and maybe even reveal the greatest mystery of all – what exactly is he dreaming about when he runs in his sleep? Bruce’s piece of advice for this week: If you’re coming down to visit the Mornington Peninsula, remember that people (and dogs) live here, so please don’t trash the place. Be respectful: anything less would be positively cat-like. And Bruce does not want to go there.

them. Parents should tell them to call 000 if they get into any dramas.

MISSING Persons Squad detectives are continuing to appeal for public assistance in relation to the disappearance of Safety Beach man Jacob Horton. Horton was last seen leaving a property in Drum Close, Frankston, on Thursday 27 June 2019. Police are treating the 28-year-old’s disappearance as suspicious. They believe Horton met with foul play and are keen to speak to anyone with information about his movements on the morning he went missing. Anyone with information is urged to call Crime Stoppers 1800 333 000.

will be summonsed to appear at, probably, Dromana Magistrates’ Court at a later date. Police thanked members of the public for reporting the hoons. They say they will “not tolerate this type of behaviour putting members of the community at risk”. Those with information are urged to call 000 or Crime Stoppers 1800 333 000. Information provided to Crime Stoppers remains confidential.

Driver sought THE driver of a truck that failed to stop after a collision outside Rosebud Basketball Stadium, Boneo Road, last week, is being sought by police. The flatbed truck carrying building supplies hit a parked blue Falcon XR8 sedan causing significant damage, 2pm, Tuesday 1 December. Anyone with information or who saw the collision is urged to call Senior Constable Russell Colson, of Rosebud police, 5986 0444 or Crime Stoppers 1800 333 000.

Justice – Bruce’s way ROSEBUD’S newest recruit Senior Constable Bruce Almighty is a dogged, hard/wet-nosed investigator with a taste for justice ... and roast chicken… and kebabs ... and chips. But mostly justice. He roams the halls of the Rosebud police station barking at evildoers, villains, miscreants, and occasionally doors opening that take him by surprise. Bruce also enjoys a bit of undercover work

Tell it like it is PARENTS of schoolies are being advised to have a possibly “awkward conversation” now in the hope it could save a “lot of dramas” in the long run. Police advise that an open, frank conversation about the risks involved in drinking alcohol, taking drugs and avoiding peer pressure and risky behaviour could avoid much heartache later. They urge parents to make sure they know where their teenagers will be staying, and who they will be staying with. They should have all the right contact details in case they need help. Parents should encourage teens to have their mobile phones on them in case of an emergency and so they can contact their friends if they lose

Costly ‘mono’ afternoon “HOON” riding near Rye pier cost three motorbike riders dearly, Monday afternoon 30 November. Rosebud police rounded up the trio allegedly performing “monos” on their motorcycles resulting in them all being impounded at a cost of $1200 each. The riders are expected to be charged with a range of traffic offences, including failing to maintain proper control of their vehicles. They

POLICE warn motorists not to leave personal belongings in their vehicles. “You may as well be inviting criminals on a shopping spree,” they say. “It doesn’t matter what you leave in your vehicle, criminals see value in everything and will attempt to steal it. “Before leaving your vehicle, take a second look around and make sure to take any visible items with you.” Report thefts to the Police Assistance Line 131 444. If the crime is happening now, or an offender might still be in the area, call 000. You can also report confidentially to Crime Stoppers on 1800 333 000 or at www.crimestoppersvic.com.au/

The University of Melbourne and Monash University has commenced work on a business case to support a proposed worldleading research and education field station at Point Nepean, following consultation and discussions with Parks Victoria. Both Universities have agreed to broad parameters for scoping the proposed centre which, if approved, would establish a coastal environment and climate change facility at the Quarantine Station Precinct. The Federal Government has already committed $25 million to the project, and the universities will develop a detailed business case for consideration by the Victorian and Federal governments. The field station, to be jointly operated by the two universities, would be an interdisciplinary science research and education facility focused on coastal environments, climate change, history and culture, the arts and community engagement. The project is expected to enhance Victoria’s standing as a hub for climate-related research and education and will deliver outcomes of global significance.

Focus areas include research into dune management, coastal erosion and inundation, marine ecosystem preservation, pollution control, biodiversity conservation to provide opportunities to secure threatened flora and fauna, habitat restoration and management of Indigenous and settler heritage sites at risk of sea-level rise. The project aligns with the aspiration expressed in the Point Nepean Master Plan that the precinct be “a crossroads for specialists and the public to engage with research focused on coastal and terrestrial ecology, Traditional Owner knowledge of Country and environmental and cultural heritage”.  The partnership also reflects the local community’s support for education and research opportunities that encompass Point Nepean’s unique landscape, rich biodiversity and deeply significant Indigenous, defence and maritime history. University of Melbourne Deputy Vice-Chancellor Research Professor Jim McCluskey said both universities are committed to extensive community engagement, adding that the proposed centre would deliver great benefits to Australia.

“We have an exciting opportunity to create a worldrenowned interdisciplinary science research and education facility here in Victoria.” “The universities are focused on the environmental and cultural sensitivities of the Point Nepean precinct, and will work closely with all levels of government and the community on proposals for the area,” Professor McCluskey said. Monash University Provost and Senior VicePresident Professor Marc Parlange said the University was pleased to enter the next phase of planning for the project, which would involve broad community and stakeholder consultation. “Point Nepean provides a unique opportunity to advance our world-leading research, given its coastal setting, marine and dune habitats, and the presence of extensive Indigenous and settler heritage sites,” Professor Parlange said. “We look forward to working with our community partners to achieve an outcome that respects the inherent sensitivities of the site and satisfies the master plan’s aim of conserving the park’s values and providing new and enhanced visitor experiences.” UPCOMING ON-SITE INVESTIGATIONS To support the business case for the development of the proposed research and education field station at Point Nepean, some minor site investigation work will commence on Quarantine Station site in December 2020.  The purpose of these initial site investigations is to gather information on the topography, vegetation, site materials and existing services. This phase of work will take approximately two weeks to complete.   To keep in touch with the project and to join the project’s mailing list, please visit: www.pointnepeanfieldstation.org.au