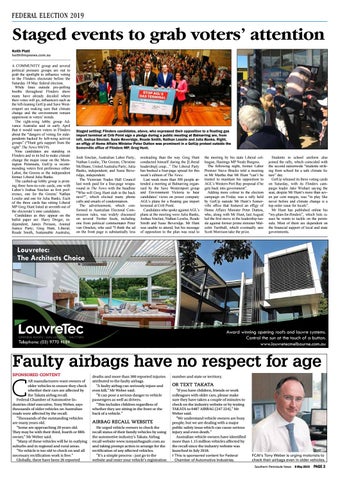 Staged events to grab voters’ attention Keith Platt keith@mpnews.com.au A COMMUNITY group and several political pressure groups are out to grab the spotlight to influence voting in the Flinders electorate before the Saturday 18 May federal election. While lines outside pre-polling booths throughout Flinders show many have already decided where their votes will go, influencers such as the left-leaning GetUp and Save Westernport are making sure that climate change and the environment remain uppermost in voters’ minds. The right-wing lobby group Advance Australia said in early April that it would warn voters in Flinders about the “dangers of voting for independents backed by left-wing activist groups” (“Hunt gets support from the right” The News 9/4/19). Nine candidates are standing in Flinders and in its bid to make climate change the major issue on the Mornington Peninsula, GetUp is recommending voters first preference either Labor, the Greens or the independent former Liberal Julia Banks. The cashed-up lobby group is printing three how-to-vote cards, one with Labor’s Joshua Sinclair as first preference, one for the Greens’ Nathan Lesslie and one for Julia Banks. Each of the three cards has sitting Liberal MP Greg Hunt listed at seventh out of the electorate’s nine candidates. Candidates as they appear on the ballot paper are: Harry Dreger, independent; James Persson, Animal Justice Party; Greg Hunt, Liberal; Reade Smith, Sustainable Australia;

Staged setting: Flinders candidates, above, who expressed their opposition to a floating gas import terminal at Crib Point sign a pledge during a public meeting at Balnarring are, from left, Joshua Sinclair, Susie Beveridge, Reade Smith, Nathan Lesslie and Julia Banks. Right, an effigy of Home Affairs Minister Peter Dutton was prominent in a GetUp protest outside the Somerville office of Flinders MP, Greg Hunt. Josh Sinclair, Australian Labor Party; Nathan Lesslie, The Greens; Christine McShane, United Australia Party; Julia Banks, independent; and Susie Beveridge, independent. The Victorian Trades Hall Council last week paid for a four-page wraparound in The News with the headline “Who will Greg Hunt stab in the back next?”, which elicited many phone calls and emails of condemnation. The advertisement, which conformed to Australian Electoral Commission rules, was widely discussed on several Twitter feeds, including one from political commentator Peter van Onselen, who said “I think the ad on the front page is substantially less

misleading than the way Greg Hunt conducted himself during the [Liberal leadership] coup...” The Liberal Party has booked a four-page spread for this week’s edition of The News. Last week more than 300 people attended a meeting at Balnarring organised by the Save Westernport group and Environment Victoria to hear candidates’ views on power company AGL’s plans for a floating gas import terminal at Crib Point. Candidates who spoke against AGL’s plans at the meeting were Julia Banks, Joshua Sinclair, Nathan Lesslie, Reade Smith and Susie Beveridge. Mr Hunt was unable to attend, but his message of opposition to the plan was read to

the meeting by his state Liberal colleague, Hastings MP Neale Burgess. The following night, former Labor Premier Steve Bracks told a meeting in Mt Martha that Mr Hunt “can’t be trusted to maintain his opposition to AGL’s Western Port Bay proposal if he gets back into government”. Adding more colour to the election campaign on Friday was a rally held by GetUp outside Mr Hunt’s Somerville office that featured an effigy of Home Affairs Minister Peter Dutton, who, along with Mr Hunt, last August led the first move in the leadership tussle against former prime minister Malcolm Turnbull, which eventually saw Scott Morrison take the prize.

Students in school uniform also joined the rally, which coincided with the second nationwide “students striking from school for a safe climate future” day. GetUp released its three voting cards on Saturday, with its Flinders campaign leader Jake Wishart saying the seat, despite Mr Hunt’s more than seven per cent margin, was “in play like never before and climate change is a top order issue for locals”. Mr Hunt has published online his “my-plan-for-flinders”, which lists issues he wants to tackle on the peninsula. Most of them are dependent on the financial support of local and state governments.

Award winning opening roofs and louvre systems. Control the sun at the touch of a button. www.louvretecmelbourne.com.au

Faulty airbags have no respect for age SPONSORED CONTENT AR manufacturers want owners of older vehicles to ensure they check whether their cars are affected by the Takata airbag recall. Federal Chamber of Automotive Industries chief executive, Tony Weber, says thousands of older vehicles on Australian roads were affected by the recall. "Thousands of the outstanding vehicles are many years old. "Some are approaching 20 years old. They may be with their third, fourth or fifth owner," Mr Weber said. "Many of these vehicles will be in outlying suburbs and in regional and rural areas. "No vehicle is too old to check on and all necessary rectification work is free." Globally, there have been 26 reported

deaths and more than 300 reported injuries attributed to the faulty airbags. "A faulty airbag can seriously injure and even kill," Mr Weber said. "It can pose a serious danger to vehicle passengers as well as drivers. "This includes children regardless of whether they are sitting in the front or the back of a vehicle."

AIRBAG RECALL WEBSITE He urged vehicle owners to check the recall status of their family vehicles by using the automotive industry's Takata Airbag recall website www.ismyairbagsafe.com.au and taking prompt action to arrange for the rectification of any affected vehicles. "It's a simple process - just go to the website and enter your vehicle's registration

number and state or territory.

OR TEXT TAKATA "If you have children, friends or work colleagues with older cars, please make sure they have taken a couple of minutes to check on the industry website or by texting TAKATA to 0487 AIRBAG (247 224)," Mr Weber said. "We understand vehicle owners are busy people, but we are dealing with a major public safety issue which can cause serious injury and even death." Australian vehicle owners have identified more than 1.15 million vehicles affected by the recall since the industry website was launched in July 2018. ■ This is sponsored content for Federal Chamber of Automotive Industries.