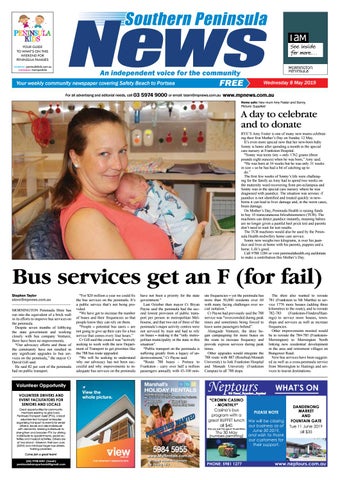 Southern Peninsula YOUR GUIDE TO WHAT’S ON THIS WEEKEND FOR PENINSULA FAMILIES FACEBOOK:

A day to celebrate and to donate RYE’S Amy Foster is one of many new mums celebrating their first Mother’s Day on Sunday 12 May. It’s even more special now that her new-born baby Sonny is home after spending a month in the special care nursery at Frankston Hospital. “Sonny was teeny tiny – only 1762 grams (three pounds eight ounces) when he was born,” Amy said. “He was born at 34 weeks but he was only 31 weeks in size – so he has had a bit of catching up to do.” The first few weeks of Sonny’s life were challenging for the family as Amy had to spend two weeks on the maternity ward recovering from pre-eclampsia and Sonny was in the special care nursery where he was diagnosed with jaundice. The situation was serious: if jaundice is not identified and treated quickly in newborns it can lead to liver damage and, in the worst cases, brain damage. On Mother’s Day, Peninsula Health is raising funds to buy 10 transcutaneous bilirubinometers (TCB). The machines can detect jaundice instantly, meaning babies are no longer given a painful heel prick test and parents don’t need to wait for test results. The TCB machines would also be used by the Peninsula Health midwifery home care service. Sonny now weighs two kilograms, is over his jaundice and lives at home with his parents, puppies and a horse. Life’s good. Call 9788 1284 or visit peninsulahealth.org.au/donate to make a contribution this Mother’s Day.

Bus services get an F (for fail) Stephen Taylor steve@mpnews.com.au MORNINGTON Peninsula Shire has run into the equivalent of a brick wall in its efforts to improve bus services on the peninsula. Despite seven months of lobbying the state government and working closely with bus company Venturer, there have been no improvements. “Our advocacy efforts and those of the community have not resulted in any significant upgrades to bus services on the peninsula,” the mayor Cr David Gill said. He said 82 per cent of the peninsula had no public transport.

“For $20 million a year we could fix the bus services on the peninsula. It’s a public service that’s not being provided. “We have got to increase the number of buses and their frequencies so that people know they can rely on them. “People – potential bus users – are not going to give up their cars for a bus service that comes every four hours.” Cr Gill said the council was “actively seeking to work with the new Department of Transport to get priorities like the 788 bus route upgraded. “We will be seeking to understand why our advocacy has not been successful and why improvements to inadequate bus services on the peninsula

The shire also wanted to reroute 781 (Frankston to Mt Martha) to service 1776 more houses (adding three kilometres to the route), and to reroute 782-783 (Frankston-Flinders/Hastings) to service more houses, townships and services as well as increase frequencies. Other improvements mooted would be to reroute the 784-785 (FrankstonMornington) to Mornington North linking new residential development in the area and retirement villages on Bungower Road. New bus services have been suggested as well as a cross-peninsula service from Mornington to Hastings and services to tourist destinations.

we are the largest on the Mornington Peninsula

ute frequencies – yet the peninsula has more than 50,000 residents over 60 with many facing challenges over social isolation.” Cr Payne had previously said the 788 service was “overcrowded during peak times and sometimes being forced to leave some passengers behind”. Alongside Venturer, the shire began campaigning for more buses on the route to increase frequency and provide express services during peak times. Other upgrades would integrate the 788 route with 887 (Rosebud-Monash University) to link Frankston Hospital and Monash University (Frankston Campus) to all 788 stops.

have not been a priority for the state government.” Last October then mayor Cr Bryan Payne said the peninsula had the second lowest provision of public transport per person in metropolitan Melbourne, and that two out of three of the peninsula’s major activity centres were not serviced by train and had to rely on buses – making it the “only metropolitan municipality in the state in this situation”. “Public transport on the peninsula is suffering greatly from a legacy of underinvestment,” Cr Payne said. “Route 788 buses - Portsea to Frankston - carry over half a million passengers annually with 45-100 min-

*CROWN CASINO - MONTHLY* Casino’s bus PLEASE NOTE program with a great BUFFET lunch We will be closing all $40. our business as of Only p/p over the age of 18 permitted. June 30 2019, Thu 30 May (numbers permitting) and wish to thank our customers for their support.