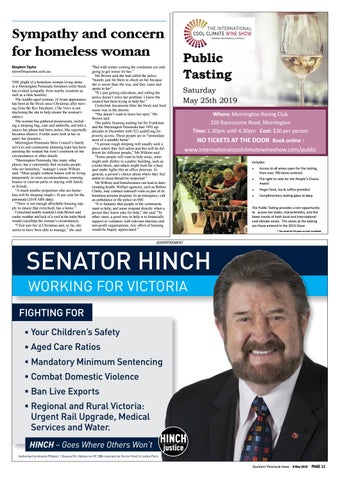 Sympathy and concern for homeless woman Stephen Taylor steve@mpnews.com.au THE plight of a homeless woman living alone in a Mornington Peninsula foreshore toilet block has evoked sympathy from nearby residents as well as a little hostility. The middle-aged woman, of Asian appearance, has been at the block since Christmas after moving from the Rye foreshore. (The News is not disclosing the site to help ensure the woman’s safety). The woman has gathered possessions, including a sleeping bag, case and umbrella, and told a source her phone had been stolen. She reportedly becomes abusive if toilet users look at her or query her presence. Mornington Peninsula Shire Council’s family services and community planning team has been assisting the woman but won’t comment on her circumstances or other details. “Mornington Peninsula, like many other places, has a community that includes people who are homeless,” manager Louise Wilkins said. “Most people without homes will be living temporarily in crisis accommodation, rooming houses or caravan parks or staying with family or friends. “A much smaller proportion who are homeless will be sleeping rough – 16 per cent for the peninsula (2018 ABS data). “There is not enough affordable housing supply to ensure that everybody has a home.” Concerned nearby resident Linda Brown said cooler weather and lack of a roof at the toilet block would exacerbate the woman’s circumstances. “I first saw her at Christmas and, so far, she seems to have been able to manage,” she said.

“But with winter coming the conditions are only going to get worse for her.” Ms Brown said she had called the police “mainly just for them to check on her because she is worse than she was, and they came and spoke to her”. “It’s just getting ridiculous, and calling the police doesn’t solve her problem. I know the council has been trying to help her.” Centrelink documents litter the block and food waste was in the shower. “She doesn’t want to leave her spot,” Ms Brown said. The public housing waiting list for Frankston and the Mornington Peninsula had 1992 applicants in December with 922 qualifying for priority access. These people are in “immediate need of a suitable home”. “A person rough sleeping will usually seek a place where they feel safest and this will be different for different people,” Ms Wilkins said. “Some people will want to hide away, some might seek shelter in a public building, such as a toilet block, and others might look for a busy spot under lights like an office doorway. In general, a person’s choice about where they feel safest to sleep should be respected.” Ms Wilkins said homelessness can lead to deteriorating health. Welfare agencies, such as Bolton Clarke, may conduct outreach visits as part of its homeless persons program. In an emergency, call an ambulance or the police on 000. “It is fantastic that people in the community want to help, and some respond directly when a person they know asks for help,” she said. “In other cases, a good way to help is to financially support or volunteer with relevant charities and non-profit organisations. Any offers of housing would be hugely appreciated.”

NO TICKETS AT THE DOOR Book online : www.internationalcoolclimatewineshow.com/public Includes: 

Access to all wines open for the tasting, from over 700 wines entered.

The right to vote for the People’s Choice Award

The Public Tasting provides a rare opportunity to access the styles, characteristics, and the latest trends of both local and international cool climate wines. The wines at the tasting are those entered in the 2019 Show. * You must be 18 years or over to attend.