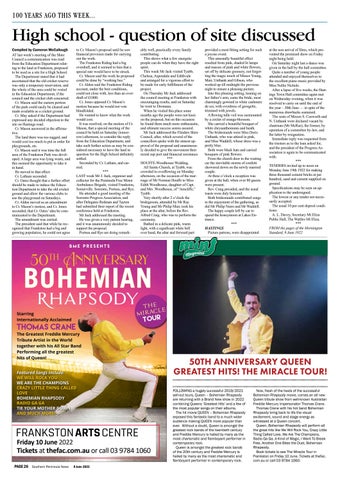 High school - question of site discussed to Cr. Mason’s proposal until he saw financial provision made for carrying out the work. The Frankston Riding had a big overdraft, and it seemed to him that a special rate would have to be struck. Cr. Mason said the work he proposed could be done by “working bee.” Cr. Alden said the Frankston Riding account, under the best conditions, could not close with, less than an overdraft of £1000. Cr. Jones opposed Cr. Mason’s motion because he would not vote blindfolded. He wanted to know what the work would cost. It was resolved, on the motion of Cr. Mason, that a special meeting of the council be held on Saturday (tomorrow) afternoon, to consider the reply from the Education Department, and take such further action as may be considered necessary to have the land in question for the High School definitely settled. Seconded by Cr. Latham, and carried. *** LAST week Mr J. Jack, organiser and collector for the Peninsula Free Motor Ambulance Brigade, visited Frankston, Somerville. Sorrento, Portsea, and Rye. He attended a good meeting of the Sorrento Progress Association, and after Delegates Redman and Tayton had submitted their report of the recent conference held at Frankston. Mr Jack addressed the meeting. He was given a very patient hearing, and it was unanimously decided to support the proposal. Portsea and Rye are doing remark-

Compiled by Cameron McCullough AT last week’s meeting of the Shire Council a communication was read from the Education Department relating to the land at Frankston, proposed to be used as a site for a High School. The Department stated that it had ascertained that the old cricket reserve was only a temporary reservation, and the whole of the area could be vested in the Education Department, if the council and the cricket club concurred. Cr. Mason said the eastern portion of the park could easily be cleared and made available as a cricket ground. Cr. May asked if the Department had expressed any decided objection to the site on Hastings road. Cr. Mason answered in the affirmative. The land there was too rugged, and would cost too much to put in order for playgrounds, etc. Cr. Mason said it was time the full area of the Frankston Park was developed. A large area was lying waste, and this seemed the opportunity to take it in hand. He moved to that effect. Cr. Latham seconded. Cr. Oates thought that a further effort should be made to induce the Education Department to take the old cricket ground and allow the various clubs to use the playground on Saturdays. Cr. Alden moved as an amendment to Cr. Mason’s motion, and Cr. Jones seconded, that Cr. Oates’ idea be communicated to the Department. The amendment was carried. The president said that while he recognised that Frankston had a big and growing population, he could not agree

ably well, practically every family contributing. This shows what a few energetic people can do when they have the right spirit. This week Mr Jack visited Tyabb, Chelsea, Aspendale and Edithvale and arranged for a vigorous effort to be made for early fulfillment of the project. On Thursday Mr Jack addressed the council meeting at Frankston with encouraging results, and on Saturday he went to Dromana. When he visited this place some months ago the people were not keen on the proposal, but on this occasion he found them much more enthusiastic, and ultimate success seems assured. Mr Jack addressed the Flinders Shire Council, after, which several of the councillors spoke with the utmost approval of the proposal and unanimously decided to give the movement their moral sup port and financial assistance. *** HOUFFE-Woodhouse Wedding. All Saints Church, at Tyabb, was crowded to overflowing on Monday afternoon, on the occasion of the marriage of Mr Norman Houffe to Miss Edith Woodhouse, daughter of Capt. and Mrs .Woodhouse, of “Arncliffe,” Tyabb. Very shortly after 2 o’clock the bridegroom, attended by Mr Ray Young and Mr Philip Mair, took his place at the altar, before the Rev. Alfred Craig, who was to perform the ceremony. Bathed in a delicate pink, warm light, with a significant white bell over head, the altar and forward part

provided a most fitting setting for such a joyous event. This unusually beautiful effect resulted from pink, shaded lit lamps and masses of pink and white flowers, set off by delicate greenery, not forgetting the magic touch of Misses Young, Mair, Unthank and Gibson, who worked up till midnight the previous night to ensure a pleasing picture. Into this pleasing setting, leaning on her father’s arm, came the bride, most charmingly gowned in white cashmere de soi, with overdress of georgette, trimmed with jewels. A flowing tulle veil was surmounted by a circlet of orange-blossom. She carried a beautiful bouquet of white chrysanthemums and heath. The bridesmaids were Miss Doris Unthank, who was attired in pink, and Miss Waddell, whose dress was a pretty blue. Both wore black hats and carried bouquets of pink flowers. From the church door to the waiting car the inevitable storrm of confetti showered down on the newly married couple. At three o’clock a reception was given at the hall, when over 80 guests were present. Rev. Craig presided, and the usual toasts were duly honored. Both bridesmaids contributed songs to the enjoyment of the gathering, as did Mr Philip Nairn and Mr Waddell. The happy couple left by car to spend the honeymoon at Lakes Entrance. *** HASTINGS Picture patrons, were disappointed

at the non arrival of films, which prevented the promised show on Friday night being held. On Saturday night last a dance was given in the hall by the hall committee. Quite a number of young people attended and enjoyed themselves to the excellent piano music provided by Miss Nellie Nichols. After a lapse of five weeks, the Hastings Town Hall committee again met on Wednesday evening, when it was resolved to carry on until the end of the year – 30th June — in spite of the numerous drawbacks sustained. The seats of Messrs S. Cusworth and N. Unthank were declared vacant by chairman (Mr McRae), the former, by operation of a committee by-law, and the latter by resignation. Immediate reply was requested from the trustees as to the loan asked for, and the president of the Progress Association is again to be communicated with. *** TENDERS invited up to noon on Monday June 19th 1922 for making three thousand cement bricks at per hundred, sand and cement supplied on ground. Specifications may be seen on application to the undersigned. The lowest or any tender not necessarily accepted. The usual 10 per cent deposit conditions: A. L. Davey, Secretary Mt Eliza Public Hall, The Wattles Mt Eliza. *** FROM the pages of the Mornington Standard, 9 June 1922

The Greatest Freddie Mercury Tribute Artist in the World together with his All Star Band Performing all the greatest hits of Queen! Featured Songs Include: WE WILL ROCK YOU WE ARE THE CHAMPIONS CRAZY LITTLE THING CALLED LOVE BOHEMIAN RHAPSODY RADIO GA GA TIE YOUR MOTHER DOWN AND MUCH MORE!

Now, fresh of the heels of the successful Bohemian Rhapsody movie, comes an all new Queen tribute show from well-known Australian Freddie Mercury impersonator Thomas Crane. Thomas Crane with his hot band Bohemian Rhapsody bring back to life the visual excitement, sound and stage energy as witnessed at a Queen concert. Queen, Bohemian Rhapsody will perform all the great hits like We Will Rock You, Crazy Little Thing Called Love, We Are The Champions, Radio Ga Ga, A Kind of Magic, I Want To Break Free, Another One Bites the Dust, Bohemian Rhapsody. Book tickets to see The Miracle Tour in Frankston on Friday 10 June. Tickets at thefac. com.au or call 03 9784 1060.