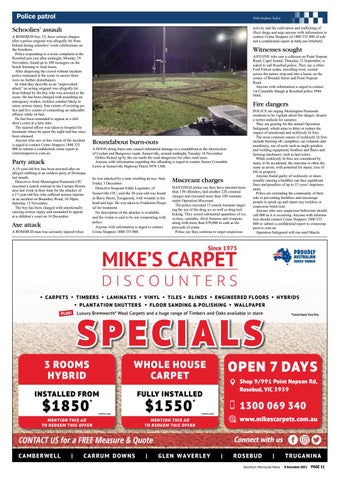 activity and the cultivation and trafficking of illicit drugs and urge anyone with information to contact Crime Stoppers of 1800 333 000 of submit a confidential report at bddy.me/3rfmSzQ

Schoolies’ assault A ROSEBUD boy, 15, faces serious charges after a police sergeant was allegedly hit from behind during schoolies’ week celebrations on the foreshore. Police responding to a noise complaint at the Rosebud pier just after midnight, Monday 29 November, found up to 300 teenagers on the beach listening to loud music. After dispersing the crowd without incident police remained at the scene to ensure there were no further disturbances. In what they describe as an “unprovoked attack” an acting sergeant was allegedly hit from behind by the boy who was arrested at the scene. He has been charged with assaulting an emergency worker, reckless conduct likely to cause serious injury, four counts of resisting police and five counts of committing an indictable offence while on bail. He has been remanded to appear at a children’s court at a later date. The injured officer was taken to hospital for treatment where he spent the night and has since been released. Anyone who saw or has vision of the incident is urged to contact Crime Stoppers 1800 333 000 or submit a confidential crime report at crimestoppersvic.com.au

Party attack A 15-year-old boy has been arrested after an alleged stabbing at an outdoor party at Dromana last month. Detectives from Mornington Peninsula CIU executed a search warrant in the Carrum Downs area last week in their hunt for the attacker of a 17-year-old boy who suffered serious injuries in an incident on Boundary Road, 10.30pm, Saturday 13 November. The boy has been charged with intentionally causing serious injury and remanded to appear at a children’s court on 14 December.

Axe attack A ROSEBUD man was seriously injured when

Witnesses sought ANYONE who saw a collision on Point Nepean Road, Capel Sound, Thursday 23 September, is asked to call Rosebud police. They say a white Ford Falcon sedan, travelling west, veered across the nature strip and into a house on the corner of Brendal Street and Point Nepean Road. Anyone with information is urged to contact 1st Constable Haugh at Rosebud police 5986 0444.

Roundabout burn-outs A HOON doing burn-outs caused substantial damage to a roundabout at the intersection of Coolart and Bungower roads, Somerville, around midnight, Tuesday 16 November. Debris flicked up by the car made the road dangerous for other road users. Anyone with information regarding this offending is urged to contact Senior Constable Lewis at Somerville Highway Patrol 5978 1300. he was attacked by a man wielding an axe, 9am, Friday 3 December. Detective Sergeant Eddie Logonder, of Somerville CIU, said the 38-year-old was found in Barry Street, Tootgarook, with wounds to his head and legs. He was taken to Frankston Hospital for treatment. No description of the attacker is available, and the victim is said to be not cooperating with police. Anyone with information is urged to contact Crime Stoppers 1800 333 000.

Miscreant charges HASTINGS police say they have arrested more than 130 offenders, laid another 220 criminal charges and executed more than 100 warrants under Operation Miscreant. The police executed 15 search warrants targeting the use of the drug ice as well as drug trafficking. They seized substantial quantities of ice, ecstasy, cannabis, illicit firearms and weapons along with more than $70,000 in cash as the proceeds of crime. Police say they continue to target suspicious

POLICE are urging Mornington Peninsula residents to be vigilant about fire danger, despite a wetter outlook for summer. They are gearing for the annual Operation Safeguard, which aims to deter or reduce the impact of intentional and recklessly lit fires. The most common causes of recklessly lit fires include burning off, campfires, car exhausts and machinery, use of tools such as angle grinders and welding equipment, bonfires and flares and farming machinery such as harvesters. While recklessly lit fires are considered by many to be accidental, the outcome is often the same as arson, with potential for injury, loss of life or property. Anyone found guilty of recklessly or intentionally causing a bushfire can face significant fines and penalties of up to 15 years’ imprisonment. Police are reminding the community of their role in preventing bushfires and encourage people to speak up and report any reckless or suspicious behaviour. Anyone who sees suspicious behaviour should call 000 as it is occurring. Anyone with information should contact Crime Stoppers 1800 333 000 or submit a confidential report to crimestoppersvic.com.au Operation Safeguard will run until March.

CONTACT US for a FREE Measure &amp; Quote CAMBERWELL

Connect with us GLEN WAVERLEY