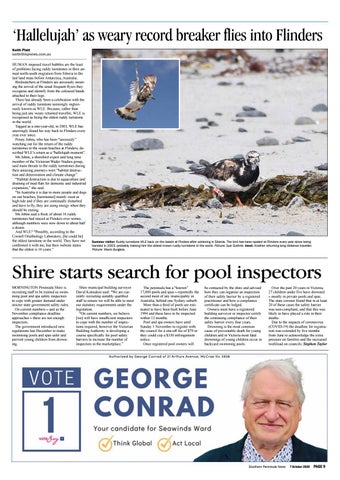 ‘Hallelujah’ as weary record breaker flies into Flinders Keith Platt keith@mpnews.com.au HUMAN imposed travel bubbles are the least of problems facing ruddy turnstones in their annual north-south migration from Siberia to the last land mass before Antarctica, Australia. Birdwatchers at Flinders are anxiously awaiting the arrival of the usual frequent flyers they recognise and identify from the coloured bands attached to their legs. There has already been a celebration with the arrival of ruddy turnstone seemingly ingloriously known as WLE. Because, rather than being just any weary returned traveller, WLE is recognised as being the oldest ruddy turnstone in the world. Tagged as a one-year-old, in 2003, WLE has unerringly found his way back to Flinders every year ever since. Penny Johns, who has been “anxiously” watching out for the return of the ruddy turnstones to the ocean beaches at Flinders, described WLE’s return as a “hallelujah moment”. Ms Johns, a shorebird expert and long time member of the Victorian Wader Studies group, said main threats to the ruddy turnstones during their amazing journeys were “habitat destruction and deterioration and climate change”. “Habitat destruction is due to aquaculture and draining of mud flats for domestic and industrial expansion,” she said. “In Australia it is due to more people and dogs on our beaches, [turnstones] mainly roost at high tide and if they are continually disturbed and have to fly, they are using energy when they should be resting. Ms Johns said a flock of about 16 ruddy turnstones had stayed at Flinders over winter, although numbers were now down to about half a dozen. And WLE? “Possibly, according to the Cornell Ornithology Laboratory, [he could be] the oldest turnstone in the world. They have not confirmed it with me, but their website states that the oldest is 16 years.”

Summer visitor: Ruddy turnstone WLE back on the beach at Flnders after wintering in Siberia. The bird has been spoted at Flinders every year since being banded in 2003, probably making him the oldest known ruddy turnstone in the world. Picture: Sue Guthrie. Inset: Another returning long distance traveller. Picture: Mavis Burgess.

Shire starts search for pool inspectors MORNINGTON Peninsula Shire is recruiting staff to be trained as swimming pool and spa safety inspectors to cope with greater demand under stricter state government safety rules. On current numbers – and as the November compliance deadline approaches – there are not enough inspectors. The government introduced new regulations last December to make swimming pools and spas safer and prevent young children from drowning.

Shire municipal building surveyor David Kotsiakos said: “We are currently recruiting suitably qualified staff to ensure we will be able to meet our statutory requirements under the legislation. “On current numbers, we believe [we] will have insufficient inspectors to cope with the number of inspections required, however the Victorian Building Authority is developing a course specifically for pool safety barriers to increase the number of inspectors in the marketplace.”

The peninsula has a “known” 17,000 pools and spas – reportedly the second most of any municipality in Australia, behind one Sydney suburb. More than a third of pools are estimated to have been built before June 1994 and these have to be inspected within 12 months. Pool and spa owners have until Sunday 1 November to register with the council for a one-off fee of $79 or they could cop a $330 infringement notice. Once registered pool owners will

be contacted by the shire and advised how they can organise an inspection of their safety barrier by a registered practitioner and how a compliance certificate can be lodged. Owners must have a registered building surveyor or inspector certify the continuing compliance of their safety barrier every four years. Drowning is the most common cause of preventable death for young children and in Victoria most fatal drownings of young children occur in backyard swimming pools.

Over the past 20 years in Victoria, 27 children under five have drowned – mostly in private pools and spas. The state coroner found that in at least 20 of these cases the safety barrier was non-compliant, and that this was likely to have played a role in their deaths. Due to the impacts of coronavirus (COVID-19) the deadline for registration was extended by five months from June to acknowledge the extra pressure on families and the increased workload on councils. Stephen Taylor