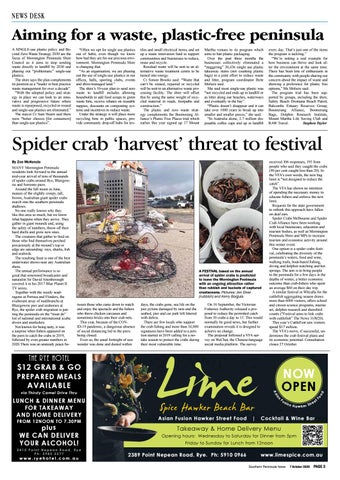 Aiming for a waste, plastic-free peninsula A SINGLE-use plastic policy and Beyond Zero Waste Strategy 2030 are the focus of Mornington Peninsula Shire Council as it aims to stop sending waste directly to landfill by 2030 and phasing out “problematic” single-use plastics. The shire says the plan complements its position as a “leader in best practice waste management for over a decade”. “With the adopted policy and strategy in place we can look to an innovative and progressive future where waste is repurposed, recycled or reused and single-use plastics are eliminated.” The mayor Cr Sam Hearn said there were “better choices [for consumers] than single-use plastics”.

“Often we opt for single use plastics out of habit, even though we know how bad they are for our precious environment. Mornington Peninsula Shire is changing that. “As an organisation, we are phasing out the use of single-use plastics in our offices, halls, sporting clubs, events and shire-managed land.” The shire’s 10-year plan to send zero waste to landfill includes allowing households to add food scraps to green waste bins, receive rebates on reusable nappies, discounts on composting systems and incentives to reduce waste. Under the strategy it will place more recycling bins in public spaces, provide community drop-off hubs for tex-

tiles and small electrical items, and set up a waste innovation fund to support communities and businesses to reduce, reuse and recycle. Residual waste will be sent to an alternative waste treatment centre to be turned into energy. Cr Simon Brooks said: “Waste that can’t be reused, repaired or recycled will be sent to an alternative waste processing facility. The shire will offset this by using the same weight of recycled material in roads, footpaths and construction.” The plastic and zero waste strategy complements the Boomerang Alliance’s Plastic Free Places trial which earlier this year signed up 17 Mount

Martha venues to its program which aims to ban plastic packaging. Over the past three months the businesses collectively eliminated a “staggering” 30,436 single use plastic takeaway items (not counting plastic bags) in a joint effort to reduce waste and litter, program coordinator Birte Moliere said. She said most single-use plastic was “not recycled and ends up in landfill or as litter along our beaches, waterways and eventually in the bay”. “Plastic doesn’t disappear and it can take over 1000 years to break up into smaller and smaller pieces,” she said. “In Australia alone, 2.7 million disposable coffee cups end up in landfill

every day. That’s just one of the items the program is tackling.” “We’re setting a real example for how business can thrive and look after the environment at the same time. There has been lots of enthusiasm in the community with people sharing our concern about the impact of waste and showing a preference for plastic free options,” Ms Moliere said. The program trial has been supported by groups, including the shire, Safety Beach Dromana Beach Patrol, Balcombe Estuary Reserves Group, Boomerang Alliance, Boomerang Bags, Dolphin Research Institute, Mount Martha Life Saving Club and RAW Travel. Stephen Taylor

tween those who came down to watch and enjoy the spectacle and the fishers who threw chicken carcasses and sometimes bricks into their crab nets. This year, because of the COVID-19 pandemic, a dangerous absence of social distancing led to the piers being closed. Even so, the usual fortnight of seawonder was done and dusted within

days, the crabs gone, sea life on the pier pylons damaged by nets and the seabed, pier and car park left littered with debris. There are few locals who support the crab fishing and more than 34,000 signatures have been added to a petition started in 2019 calling for a notake season to protect the crabs during their most vulnerable time.

On 16 September, the Victorian Fisheries Authority released a proposal to reduce the permitted catch from 30 crabs a day to 15. This would normally be good news, but further examination reveals it is designed to achieve no change. The proposal followed a VFA survey on WeChat, the Chinese-language social media platform. The survey

p lu s WE CAN DELIVER YOUR ALCOHOL!

A FESTIVAL based on the annual arrival of spider crabs is predicted to leave the Mornington Peninsula with an ongoing attraction rather than rubbish and buckets of captured crustaceans. Pictures: Jon Diver (rubbish) and Kerry Borgula

received 306 responses, 195 from people who said they caught the crabs (90 per cent caught less than 20). In the VFA’s own words, the new bag limit is “not designed to reduce the catch”. The VFA has shown no intention of spending the necessary money to educate fishers and enforce the new limit. Requests for the state government to rethink this approach have fallen on deaf ears. Spider Crabs Melbourne and Spider Crab Alliance have been working with local businesses, education and tourism bodies, as well as Mornington Peninsula Shire and MPs to increase tourism and economic activity around this winter event. One option is a spider crabs festival, celebrating the diversity of the peninsula’s waters, food and wine, walking trails, boat-based fishing, diving and dolphin watching and hot springs. The aim is to bring people to the peninsula for a few days in the depths of winter, a better economic outcome than crab-fishers who spent an average $60 on their day trip. A similar festival in Whyalla for the cuttlefish aggregating season draws more than 6000 visitors, offers school and citizen science programs, marine art, dolphin research and shorebird counts (“Festival aims to link crabs with cuttlefish” The News 31/8/20). This year’s CuttleFest saw visitors spend $17 million. The VFA’s move, if successful, undermines the crab festival plans and its economic potential. Consultation closes 27 October.

By Zoe McKenzie MANY Mornington Peninsula residents look forward to the annual mid-year arrival of tens of thousands of spider crabs around Rye, Blairgowrie and Sorrento piers. Around the full moon in June, masses of the slightly creepy, tall, brown, Australian giant spider crabs march into the southern peninsula shallows. No one really knows why they like this area so much, but we know what happens when they arrive. They gather in giant mounds and, using the safety of numbers, throw off their hard shells and grow new ones. The creatures that gather to feed on those who find themselves perched precariously at the mound’s top or edge are astounding: rays, sharks, fish and seabirds. The resulting feast is one of the best underwater shows near any Australian shore. The annual performance is so great that renowned broadcaster and naturalist Sir David Attenborough covered it in his 2017 Blue Planet II TV series. Together with the weedy seadragons at Portsea and Flinders, the exuberant array of nudibranchs at Blairgowrie pier and seahorses at Rye, the spider crab migration is putting the peninsula on the “must do” list of national and international scuba divers and snorkelers. Not known for being tasty, it was a surprise when fishers appeared on the piers to catch the crabs in 2019, followed by even greater numbers in 2020.There was an unsteady peace be-

Takeaway & Home Delivery Menu Opening hours: Wednesday to Saturday for Dinner from 5pm Friday to Sunday for Lunch from 12noon