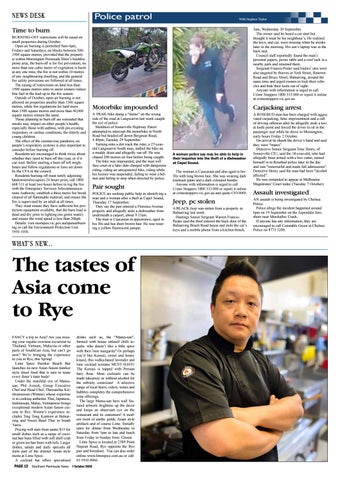 Time to burn BURNING-OFF restrictions will be eased on small properties during October. Open air burning is permitted 9am-4pm, Fridays and Saturdays, on blocks between 5001500 square metres, provided that the property is within Mornington Peninsula Shire’s bushfire prone area; the burn-off is for fire prevention; no more than one cubic metre of vegetation is burnt at any one time; the fire is not within 10 metres of any neighbouring dwelling, and the general fire safety provisions are followed at all times. The easing of restrictions on land less than 1500 square metres aims to assist owners reduce fine fuel in the lead up to the fire season. Outside of October, open air burning is not allowed on properties smaller than 1500 square metres, while fire regulations for land more than 1500 square metres and more than 40,000 square metres remain the same. Those planning to burn off are reminded that smoke may impact on other people’s health, especially those with asthma, with pre-existing respiratory or cardiac conditions, the elderly and young children. The effect of the coronavirus pandemic on people’s respiratory systems is also important to consider before burning off. Residents are encouraged to think twice about whether they need to burn off this year, or if it can wait. Before starting a burn off tell neighbours and follow regulations or laws set down by the CFA or the council. Residents burning off must notify adjoining landowners/occupiers 24 hours prior, call 1800 668 511 at least two hours before to log the fire with the Emergency Services Telecommunications Authority, establish a three metre fire break cleared of all flammable material, and ensure the fire is supervised by an adult at all times. They must ensure they have sufficient fire protection equipment available, that the burn load is dead and dry prior to lighting (no green waste) and ensure the wind speed is less than 20kph. Details: visit mornpen.vic.gov.au/openairburning or call the Environment Protection Unit 5950 1050.

3am, Wednesday 30 September. The owner said he heard a car start but thought it must be his neighbour’s. He realised the keys, and car, were missing when he awoke later in the morning. His son’s laptop was in the back seat. Council staff reportedly found the man’s personal papers, picnic table and a roof rack in a nearby park and returned them. Sergeant Francis-Pester said tradies’ utes were also targeted by thieves in York Street, Renown Road and Bruce Street, Balnarring, around the same time and urged owners to lock their vehicles and hide their tools out of sight. Anyone with information is urged to call Crime Stoppers 1800 333 000 or report it online at crimestoppers.vic.gov.au

A TRAIL bike doing a “mono” on the wrong side of the road at Langwarrin last week caught the eye of police. Members of Somerville Highway Patrol attempted to intercept the motorbike in North Road but headed off down Bergman Road, 4.40pm, Tuesday 29 September. Turning onto a dirt track the rider, a 27-yearold Langwarrin South man, stalled the bike on a muddy drain and allegedly ran off. He was chased 200 metres on foot before being caught. The bike was impounded, and the man will face court at a later date charged with dangerous riding, riding an unregistered bike, riding while his licence was suspended, failing to wear a helmet and failing to stop when directed by police.

A ROSEBUD man has been charged with aggravated carjacking, false imprisonment and a raft of driving offences after he allegedly stole a taxi at knife point and forced the driver to sit in the passenger seat while he drove to Mornington, early hours Friday 2 October. On arrival he shook the driver’s hand and said they were “mates”. Detective Senior Sergeant Tony Henry, of Somerville CIU, said the 18-year-old, who had allegedly been armed with a box cutter, turned himself in to Rosebud police later in the day and was “remorseful and made full admissions”. Detective Henry said the man had been “alcohol affected”. He was remanded to appear at Melbourne Magistrates’ Court today (Tuesday 7 October).

Pair sought POLICE are seeking public help in identifying a man and a woman after a theft at Capel Sound, Thursday 17 September. They say the pair entered a Florence Avenue property and allegedly stole a dishwasher from underneath a carport, about 9.15am. The man is Caucasian in appearance, aged in his 30s and has short brown hair. He was wearing a yellow fluorescent jumper.

The tastes of Asia come to Rye FANCY a trip to Asia? Are you missing your regular overseas excursion to Thailand, Vietnam, Malaysia or other parts of SouthEast Asia, but can’t go now? We’re bringing the experience to you in Rye, this Spring! Lime Spice Hawker Beach Bar launches its new Asian fusion hawker style street food that is sure to tease every diner’s taste buds! Under the watchful eye of Mamasan, Phil Axnick, Group Executive Chef and Head Chef, Thawatchai Kittikunsuwan (Winnie) whose expertise is in cooking authentic Thai, Japanese, Indonesian, Malay, Vietnamese brings exceptional modern Asian fusion cuisine to Rye. Winnie’s experience includes Ting Tong Kanteen at Balnarring and Sweet Basil Thai in South Yarra. Pricing will start from under $15 for small dishes such as a range of coconut bao buns filled with soft shell crab or green tea bao buns with tofu. Larger dishes, salads and daily specials all form part of the distinct Asian style menu at Lime Spice. A cocktail bar offers specialised

drinks such as; the “Mama-san”, formed with house infused chilli tequila: who doesn’t like a little spice with their lime margarita? Or perhaps you’d like Kawaii; sweet and honey kissed, this vodka-based lavender and lime cocktail screams MUST HAVE! The Kawaii is topped with Persian fairy floss. Most cocktails can be made takeaway or without alcohol for the sobriety conscious! A selective range of local beers, ciders, wines and bubbles completes the comprehensive wine offerings. The large Mama-san hero wall featured artwork brightens up the decor and keeps an observant eye on the restaurant and its customers! A modern twist of earthy golds, Asian style artifacts and of course Lime. Initially open for dinner from Wednesday to Saturday from 5pm to late and lunch from Friday to Sunday from 12noon Lime Spice is located at 2389 Point Nepean Road, Rye opposite the Rye pier and foreshore. You can also order online www.limespice.com.au or call: 03 5910 0966. 7 October 2020

A woman police say may be able to help in their inquiries into the theft of a dishwasher at Capel Sound. The woman is Caucasian and also aged in her 30s with long brown hair. She was wearing dark tracksuit pants and a dark coloured hoodie. Anyone with information is urged to call Crime Stoppers 1800 333 000 or report it online at crimestoppers.vic.gov.au and quote CSV4005.

Jeep, pc stolen A BLACK Jeep was stolen from a property in Balnarring last week. Hastings Senior Sergeant Warren FrancisPester said the thief entered the back door of the Balnarring Beach Road house and stole the car’s keys and a mobile phone from a kitchen bench,

Assault investigated AN assault is being investigated by Chelsea Police. Police allege the incident happened around 6pm on 19 September on the Aspendale foreshore near Mordialloc Creek. If anyone has any information, they are encouraged to call Constable Green at Chelsea Police on 8773 3200.