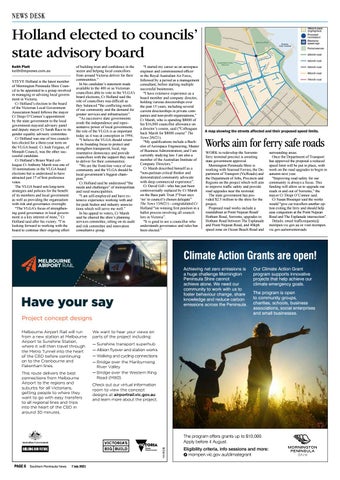 Holland elected to councils’ state advisory board Keith Platt keith@mpnews.com.au STEVE Holland is the latest member of Mornington Peninsula Shire Council to be appointed to a group involved in managing or advising local government in Victoria. Cr Holland’s election to the board of the Victorian Local Government Association board follows the mayor Cr Despi O’Connor’s appointment by the state government to the local government mayoral advisory panel and deputy mayor Cr Sarah Race to its gender equality advisory committee. Cr Holland was one of two councillors elected for a three-year term on the VLGA board. Cr Josh Fergeus, of Monash Council, was the other successful candidate. Cr Holland’s Briars Ward colleague Cr Anthony Marsh was one of 10 nominations in the VLGA board elections but is understood to have attracted just 17 of first preference votes. The VLGA board sets long-term strategies and policies for the benefit of its members and local government as well as providing the organisation with risk and governance oversight. “The VLGA’s focus of strengthening good governance in local government is a key interest of mine,” Cr Holland said after his victory. “I’m looking forward to working with the board to continue their ongoing effort

of building trust and confidence in the sector and helping local councillors from around Victoria deliver for their communities.” In his candidate’s statement made available to the 400 or so Victorian councillors able to vote in the VLGA’s board elections, Cr Holland said the role of councillors was difficult as they balanced “the conflicting needs of our community and the demand for greater services and infrastructure”. “As successive state governments erode the independence and representative power of local government, the role of the VLGA is as important today as it was at conception in 1994. “I believe the VLGA should return to its founding focus to protect and strengthen transparent, local, representative democracy and provide councillors with the support they need to deliver for their communities. “We are the front-line voice of our community and the VLGA should be local government’s biggest champion.” Cr Holland said he understood “the needs and challenges” of metropolitan and rural municipalities. “I am self-employed and have extensive experience working with and for peak bodies and industry associations which will serve me well.” In his appeal to voters, Cr Marsh said he chaired the shire’s planning services committee, sitting on its audit and risk committee and innovation consultative group.

“I started my career as an aerospace engineer and commissioned officer in the Royal Australian Air Force, followed by a period as a management consultant, before starting multiple successful businesses. “I have extensive experience as a board member and company director, holding various directorships over the past 15 years, including several current directorships in private companies and non-profit organisations,” Cr Marsh, who is spending $8000 of his $16,000 councillor allowance on a director’s course, said (“Colleagues back Marsh for $8000 course” The News 2/6/21). “My qualifications include a Bachelor of Aerospace Engineering, Master of Business Administration, and I am currently studying law. I am also a member of the Australian Institute of Company Directors.” Cr Marsh described himself as a “non-partisan critical thinker and demonstrated community advocate with deep commercial experience”. Cr David Gill - who has just been controversially replaced by Cr Marsh on the Bass park Trust )“Trust says ‘no’ to council’s chosen delegate” The News 15/6/21) - congratulated Cr Holland “on winning first position in a ballot process involving all councillors in Victoria”. “It is good to see a councillor who understands governance and rules has been elected.”

A map showing the streets affected and their proposed speed limits.

Works aim for ferry safe roads WORK to redevelop the Sorrento ferry terminal precinct is awaiting state government approval. Mornington Peninsula Shire is working with Searoad Ferries, the Department of Transport (VicRoads) and the Department of Jobs, Precincts and Regions on the project which will aim to improve traffic safety and provide road upgrades near the terminal. The state government has provided $2.5 million to the shire for the project. Proposed road works include a roundabout at Point Nepean Road/ Hotham Road, Sorrento, upgrades to Hotham Road between The Esplanade and Point Nepean Road, and 40kph speed zone on Ocean Beach Road and

surrounding areas. Once the Department of Transport has approved the proposal a reduced speed limit will be put in place, with work on the road upgrades to begin in autumn next year. “Improving road safety for our community is always a focus. This funding will allow us to upgrade our roads in and out of Sorrento,” the mayor Cr Despi O’Connor said. Cr Susan Bissinger said the works would “give car travellers another option exiting the ferry and should help ease congestion at the Point Nepean Road and The Esplanade intersection”. Details: email trafficrequests@ mornpen.vic.gov.au or visit mornpen. vic.gov.au/sorrentoroads

Climate Action Grants are open! Achieving net zero emissions is a huge challenge Mornington Peninsula Shire cannot achieve alone. We need our community to work with us to foster behaviour change, share knowledge and reduce carbon emissions across the Peninsula.

We want to hear your views on parts of the project including: — Sunshine transport superhub — Albion flyover and station works — Walking and cycling connections — Bridge over the Maribyrnong River Valley — Bridge over the Western Ring Road (M80) Check out our virtual information room to view the concept designs at airportrail.vic.gov.au and learn more about the project.