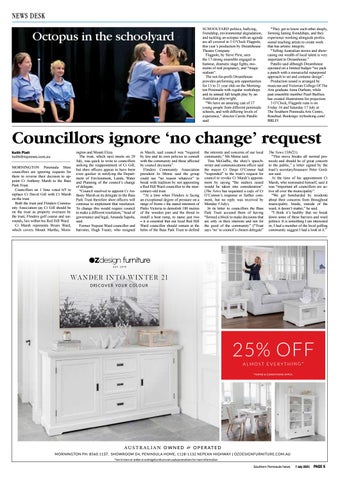 Octopus in the schoolyard

SCHOOLYARD politics, bullying, friendship, environmental degradation, and tackling an octopus with an agenda are all covered in 3 O’Clock Flagpole, this year’s production by Dreamhouse Theatre Company. Flagpole, by Steve Pirie, sees the 17-strong ensemble engaged in humour, dramatic stage fights, moments of real poignancy, and “magic realism”. The not-for-profit Dreamhouse provides performing arts opportunities for 13 to 21 year olds on the Mornington Peninsula with regular workshops and its annual full length play by an Australian playwright. “We have an amazing cast of 17 young people from different peninsula schools, and with differing levels of experience,” director Carole Patullo said.

“They get to know each other deeply, forming lasting friendships, and they experience working alongside professional teaching artists to create work that has artistic integrity. “Telling Australian stories and showcasing our wealth of local talent is very important to Dreamhouse.” Patullo said although Dreamhouse operated on a limited budget “we pack a punch with a resourceful repurposed approach to set and costume design”. Production sound is arranged by musician and Victorian College Of The Arts graduate Anna Durham, while past ensemble member Pearl Baillieu has created illustrations for projection. 3 O’Clock, Flagpole runs is on Friday 16 and Saturday 17 July at The Southern Peninsula Arts Centre, Rosebud. Bookings: trybooking.com/ BRLFI

Councillors ignore ‘no change’ request Keith Platt keith@mpnews.com.au MORNINGTON Peninsula Shire councillors are ignoring requests for them to reverse their decision to appoint Cr Anthony Marsh to the Bass Park Trust. Councillors on 1 June voted 6/5 to replace Cr David Gill with Cr Marsh on the trust. Both the trust and Flinders Community Association say Cr Gill should be on the trust as property overseen by the trust, Flinders golf course and surrounds, lies within his Red Hill Ward. Cr Marsh represents Briars Ward, which covers Mount Martha, Morn-

ington and Mount Eliza. The trust, which next meets on 29 July, was quick to write to councillors seeking the reappointment of Cr Gill, but shire officers appear to have been even quicker in notifying the Department of Environment, Lands, Water and Planning of the council’s change of delegate. “Council resolved to appoint Cr Anthony Marsh as its delegate to the Bass Park Trust therefore shire officers will continue to implement that resolution. To change this would require council to make a different resolution,” head of governance and legal, Amanda Sapolu, said. Former Nepean Ward councillor and barrister, Hugh Fraser, who resigned

in March, said council was “required by law and its own policies to consult with the community and those affected by council decisions”. Flinders Community Association president Jo Monie said the group could see “no reason whatever” to break with tradition by not appointing a Red Hill Ward councillor to the nearcentury-old trust. “At a time when Flinders is facing an exceptional degree of pressure on a range of fronts – the stated intention of Parks Victoria to demolish 180 metres of the wooden pier and the threat to install a boat ramp, to name just two – it is essential that our local Red Hill Ward councillor should remain at the helm of the Bass Park Trust to defend

the interests and concerns of our local community,” Ms Monie said. Tina McGuffie, the shire’s speechwriter and communications officer said the mayor Cr Despi O’Connor had “responded” to the trust’s request for council to revoke Cr Marsh’s appointment by saying “the matters raised would be taken into consideration”. (The News has requested a copy of Cr O’Connor’s response or further comment, but no reply was received by Monday 5 July). In its letter to councillors the Bass Park Trust accused them of having “formed a block to make decisions that are only in their interests and not for the good of the community” (“Trust says ‘no’ to council’s chosen delegate”

The News 15/6/21). “This move breaks all normal protocols and should be of great concern to the public,” a letter signed by the trust’s secretary/treasurer Peter Gerdsen said. At the time of his appointment Cr Marsh, who nominated himself, said it was “important all councillors are active all over the municipality”. “We get bombarded by residents about their concerns from throughout municipality. Inside, outside of the ward, it doesn’t matter,” he said. “I think it’s healthy that we break down some of these barriers and ward politics. It is something I am interested in; I had a member of the local golfing community suggest I had a look at it.”