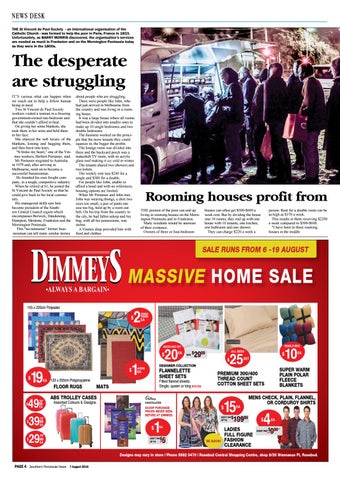 NEWS DESK THE St Vincent de Paul Society - an international organisation of the Catholic Church - was formed to help the poor in Paris, France in 1833. Unfortunately, as BARRY MORRIS discovered, the organisation’s services are needed as much in Frankston and on the Mornington Peninsula today as they were in the 1800s.

The desperate are struggling IT’S curious what can happen when we reach out to help a fellow human being in need. Two St Vincent de Paul Society workers visited a woman in a freezing government-owned one-bedroom unit that she couldn’t afford to heat. On giving her some blankets, she took them in her arms and held them to her face. She enjoyed the soft luxury of the blankets, kissing and hugging them, and then burst into tears. “It broke my heart,” one of the Vinnies workers, Herbert Portanier, said. Mr Portanier migrated to Australia in 1979 and, after arriving in Melbourne, went on to become a successful businessman. He founded his own freight company, in a tough, competitive industry. When he retired at 61, he joined the St Vincent de Paul Society so that he could give back to his local community. His managerial skills saw him become president of the Southern Central Council region which encompasses Berwick, Dandenong, Hampton, Mentone, Frankston and the Mornington Peninsula. This “no-nonsense” former businessman can tell many similar stories

about people who are struggling. There were people like John, who had just arrived in Melbourne from the country and was living in a rooming house. It was a large house where all rooms had been divided into smaller ones to make up 10 single bedrooms and two double bedrooms. The business worked on the principle that the more tenants they could squeeze in, the bigger the profits. The lounge room was divided into three and the backyard porch was a makeshift TV room, with its acrylic glass roof making it icy cold in winter. The tenants shared two showers and two toilets. The weekly rent was $240 for a single and $380 for a double. For people like John, unable to afford a bond and with no references, housing options are limited. When Mr Portanier and John met, John was wearing thongs, a shirt two sizes too small, a pair of pants one size too big, held up by a worn out belt. On his trip from the country to the city, he had fallen asleep and his bag, with all his possessions, was stolen. A Vinnies shop provided him with food and clothes.

Rooming houses profit from THE poorest of the poor can end up living in rooming houses on the Mornington Peninsula and in Frankston. Many residents would be unaware of their existence. Owners of three or four-bedroom

houses can often get $500-$600 a week rent. But by dividing the house into 10 rooms, they end up with one house with 10 tenants, one kitchen, one bathroom and one shower. They can charge $220 a week a

DON’T PAY UP TO

DON’T PAY UP TO