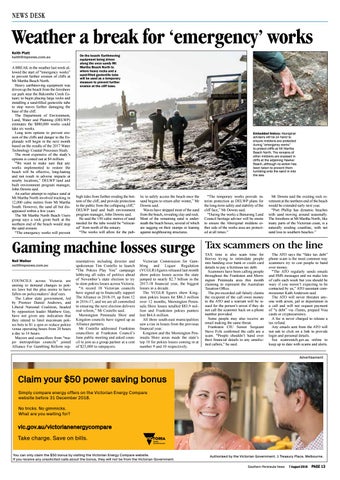 Weather a break for ‘emergency’ works Keith Platt keith@mpnews.com.au A BREAK in the weather last week allowed the start of “emergency works” to prevent further erosion of cliffs at Mt Martha Beach North. Heavy earthmoving equipment was driven up the beach from the foreshore car park near the Balcombe Creek Estuary to begin placing large rocks and installing a sand-filled geotextile tube to stop waves further damaging the base of the cliff. The Department of Environment, Land, Water and Planning (DELWP) estimates the $880,000 works could take six weeks. Long term options to prevent erosion of the cliffs and danger to the Esplanade will begin in the next month based on the results of the 2017 Water Technology Coastal Processes Study. The most expensive of the study’s options is costed out at $4 million. “We want to make sure that any works implemented to restore the beach will be effective, long-lasting and not result in adverse impacts at nearby locations,” DELWP land and built environment program manager, John Downs said. An earlier attempt to replace sand at Mt Martha North involved trucking in 12,000 cubic metres from Mt Martha South. However, the sand all but disappeared within a few years. The Mt Martha North Beach Users group says a rock groin built at the northern end of the beach would stop the sand erosion. “The emergency works will prevent

On the beach: Earthmoving equipment being driven along the once sandy Mt Martha Beach North to where heavy rocks and a sand-filled geotextile tube will be used as a temporary measure to prevent further erosion at the cliff base.

Embedded history: Aboriginal advisers will be on hand to ensure middens are protected during “emergency works” to protect cliffs at Mt Martha Beach North. The remains of other middens are exposed in cliffs at the adjoining Hawker Beach, although no action has been taken to prevent them tumbling onto the sand in into the sea.

high tides from further eroding the bottom of the cliff, and provide protection to the public from the collapsing cliff,” DELWP land and built environment program manager, John Downs said. He said the 150 cubic metres of sand needed for the tube would be “relocated” from north of the estuary. “The works will allow for the pub-

lic to safely access the beach once the sand begins to return after winter,” Mr Downs said. Waves have stripped most of the sand from the beach, revealing clay and rock. Most of the remaining sand is underneath the beach boxes, several of which are sagging on their stumps or leaning against neighbouring structures.

COUNCILS across Victoria are uniting to demand changes to pokies laws but the plea seems to have fallen on policymakers’ deaf ears. The Labor state government, led by Premier Daniel Andrews, and Liberal National Coalition, headed by opposition leader Matthew Guy, have not given any indication that they intend to limit maximum pokies bets to $1 a spin or reduce pokies venue operating hours from 20 hours a day to 14 hours. Mayors and councillors from “major metropolitan councils” joined Alliance For Gambling Reform rep-

resentatives including director and spokesman Tim Costello to launch “The Pokies Play You” campaign lobbying all sides of politics ahead of November’s state election to try to stem pokies losses across Victoria. “A record 18 Victorian councils have signed up to financially support The Alliance in 2018-19, up from 12 in 2016-17, and we are all committed to ensuring the next election delivers real reform,” Mr Costello said. Mornington Peninsula Shire and Kingston councils have signed up as Alliance partners. Mr Costello addressed Frankston councillors at Frankston Council’s June public meeting and asked council to join as a group partner at a cost of $25,000 to ratepayers.

“The temporary works provide interim protection as DELWP plans for the long-term safety and stability of the cliff face,” Mr Downs said. “During the works a Bunurong Land Council heritage adviser will be onsite to ensure the Aboriginal middens either side of the works area are protected at all times.”

Mr Downs said the existing rock revetment at the northern end of the beach would be extended early next year. “Port Phillip has dynamic beaches with sand moving around seasonally. The foreshore at Mt Martha North, like many parts of the Victorian coast, is a naturally eroding coastline, with net sand loss to southern beaches.”

Tax scammers on the line TAX time is also scam time for thieves trying to intimidate people into handing over bank or credit card details to pay a fictitious tax debt. Scammers have been calling people throughout the Frankston and Mornington Peninsula area this month claiming to represent the Australian Taxation Office. The pre-recorded call falsely claims the recipient of the call owes money to the ATO and a warrant will be issued for the person’s arrest if they do not call the scammer back on a phone number provided. Some people may also receive an email making the same threat. Frankston CIU Senior Sergeant Steve Fyfe confirmed the calls are a scam. “People shouldn’t hand over their financial details to any unsolicited callers,” he said.

The ATO says the “fake tax debt” phone scam is the most common way scammers try to con people to hand over money. “The ATO regularly sends emails and SMS messages and we make lots of calls each week but you should be wary if you weren’t expecting to be contacted by us,” ATO assistant commissioner Kath Anderson said. The ATO will never threaten anyone with arrest, jail or deportation in a call and will not request payment of “a debt” via iTunes, prepaid Visa cards or cryptocurrency. A fee is never charged to release a tax refund. Any emails sent from the ATO will not ask to click on a link to provide login and personal details. See scamwatch.gov.au online to keep up to date with scams and alerts. Advertisement