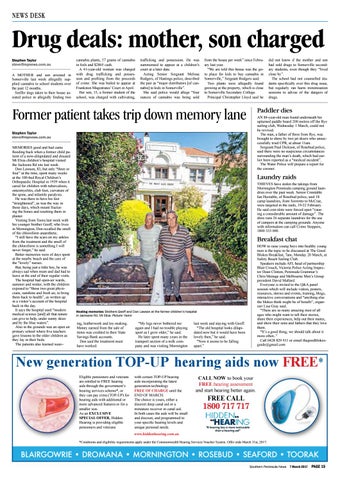 cannabis plants, 57 grams of cannabis in foils and $2865 cash. A 41-year-old woman was charged with drug trafficking and possession and profiting from the proceeds of crime. She was bailed to appear at Frankston Magistrates’ Court in April. Her son, 15, a former student of the school, was charged with cultivating,

trafficking and possession. He was summonsed to appear at a children’s court at a later date. Acting Senior Sergeant Melissa Rodgers, of Hastings police, described the pair as “major distributors [of cannabis] to kids in Somerville”. She said police would allege “four ounces of cannabis was being sold

from the house per week” since February last year. “We are told this house was the goto place for kids to buy cannabis in Somerville,” Sergeant Rodgers said. Two plants were allegedly found growing at the property, which is close to Somerville Secondary College. Principal Christopher Lloyd said he

Paddler dies AN 84-year-old man found underneath his upturned paddle board 200 metres off the Rye sailing club, Wednesday 1 March, could not be revived. The man, a father of three from Rye, was brought to shore by two jet skiers who unsuccessfully tried CPR, at about 11am. Sergeant Paul Dickson, of Rosebud police, said there were no suspicious circumstances surrounding the man’s death, which had earlier been reported as a “medical incident”. The Water Police will prepare a report for the coroner.

Stephen Taylor steve@mpnews.com.au MEMORIES good and bad came flooding back when a former child patient of a now-dilapidated and disused Mt Eliza children’s hospital visited the Jacksons Rd site last week. Don Lawson, 83, but only “three or four” at the time, spent many weeks at the 100-bed Royal Children’s Orthopaedic Hospital in 1939 when it cared for children with tuberculosis, osteomyelitis, club foot, curvature of the spine, and infantile paralysis. He was there to have his feet “straightened”, as was the way in those days, which meant fracturing the bones and resetting them in plaster. Visiting from Toora last week with his younger brother Geoff, who lives in Mornington, Don recalled the smell of the chloroform anaesthetic. “I still have the scars on my ankles from the treatment and the smell of the chloroform is something I will never forget,” he said. Better memories were of days spent at the nearby beach and the care of the “lovely” nurses. But, being just a little boy, he was always sad when mum and dad had to leave at the end of their regular visits. The hospital had open-air wards, summer and winter, with the children exposed to “those two great physicians, sunshine and fresh air, to bring them back to health”, as written up in a visitor’s account of the hospital back in the day. It says the hospital used “modern medical science [and] all that nature can give to help, under sunny skies and by the blue waters”. Also in the grounds was an open air primary school where five teachers gave lessons to the older children as they lay in their beds. The patients also learned weav-

did not know if the mother and son had sold drugs to Somerville secondary students, even though they “lived close by”. The school had not counselled students specifically over this drug issue, but regularly ran harm minimisation sessions to advise of the dangers of drugs.

Laundry raids THIEVES have stolen the takings from Mornington Peninsula camping ground laundries over the past week. Senior Constable Ian Huxtable, of Rosebud police, said 18 camp laundries, from Sorrento to McCrae, were targeted in the raids, 19-22 February. He said coin slots were forced open “causing a considerable amount of damage”. The shire runs 26 separate laundries for the use of campers at the camping grounds. Anyone with information can call Crime Stoppers, 1800 333 000.

Breakfast chat HOW to raise young boys into healthy young men is the topic to be discussed at The Good Blokes Breakfast, 7am, Monday 20 March, at Safety Beach Sailing Club. Speakers include AFL head of partnership Blair Crouch, Victoria Police Acting Inspector Dean Clinton, Peninsula Grammar’s Chris Menage and Melbourne Men’s Group president David Mallard. Everyone is invited to the Q&amp;A panel session which will include videos, posters, resources, stories and events, training, blogs, interactive conversations and “anything else the blokes think might be of benefit”, organiser Lisa Gray said. “There are so many amazing men of all ages who might want to tell their stories, share their experiences, help out their mates, and show their sons and fathers that they love them. “It’s a good thing; we should talk about it more often..” Call 0428 829 911 or email thegoodblokesguide@gmail.com

ing, leatherwork and toy-making. Money earned from the sale of items was credited to their State Savings Bank accounts. Don said the treatment must have worked.

“My legs never bothered me again and I had no trouble playing sport as I grew older,” he said. He later spent many years in the transport section of a milk company and was visiting Mornington

last week and staying with Geoff. “The old hospital looks dilapidated now but it would have been lovely then,” he said. “Now it seems to be falling apart.”

with certain TOP-UP hearing aids incorporating the latest generation technology FREE OF CHARGE until the END OF MARCH. The choice is yours, either a discreet deep canal aid or a miniature receiver in canal aid. In both cases the aids will be small and discreet, and programmed to your specific hearing levels and unique personal needs. www.hiddenhearing.com.au