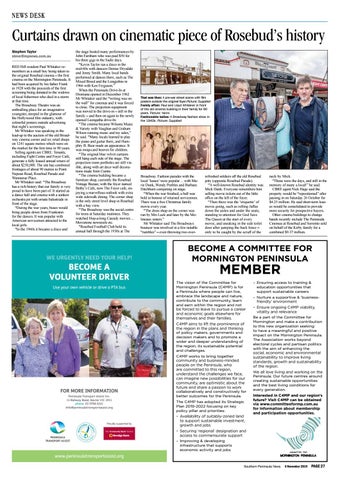 Curtains drawn on cinematic piece of Rosebud’s history Stephen Taylor steve@mpnews.com.au RED Hill resident Paul Whitaker remembers as a small boy being taken to the original Rosebud cinema – the first cinema on the Mornington Peninsula. It had been acquired by his father Frank in 1928 with the proceeds of the first screening being donated to the widows of local fishermen who died in a storm at that time. The Broadway Theatre was an enthralling place for an imaginative youngster, steeped in the glamour of the Hollywood film industry, with colourful posters outside advertising that night’s screenings. Mr Whitaker was speaking in the lead-up to the auction of the old Broadway cinema corner and six retail shops on 1241 square metres which were on the market for the first time in 90 years. Selling agents are CBRE. Tenants, including Fight Centre and Foyer Café, generate a fully leased annual return of about $250,000. The site has combined frontages of about 90 metres to Point Nepean Road, Rosebud Parade and Wannaeue Place. Mr Whitaker said: “The Broadway has a rich history that our family is very proud to have been part of. It started as a dance hall and cinema with a sunken orchestra pit with ornate balustrade in front of the stage. “During the war years, buses would bring people down from Frankston for the dances. It was popular with American servicemen attracted to the local girls. “In the 1960s it became a disco and

the stage hosted many performances by John Farnham who was paid $50 for his three gigs in the Sadie days. “Kevin Taylor ran a disco in the mid-60s with dancers Denise Drysdale and Jenny Smith. Many local bands performed at dances there, such as The Mixed Breed and the Longjohns in 1966 with Ken Ferguson.” When the Peninsula Drive-In at Dromana opened in December 1962 Mr Whitaker said the “writing was on the wall” for cinemas and it was forced to close. The projection equipment was moved to the drive-in – still in the family – and then on again to the newly opened Leongatha drive-In. “The cinema became Wilsons Music & Variety with Vaughan and Graham Wilson running music and toy sales,” he said. “Many locals learned to play the piano and guitar there, and Humphry B. Bear made an appearance. It was swap-card heaven for children. “The original blue velvet curtains still hang each side of the stage. The projection room portholes are still visible, along with art deco wall decorations made from Canite. “The cinema building became a furniture shop, currently the Rosebud Vintage Bazaar, with the foyer named Bethy’s Cafe, now The Foyer cafe, enjoying a marvellous outlook with extra wide sidewalk dining. The corner shop is the only street level shop in Rosebud with a bay view. “The Broadway was the social centre for teens at Saturday matinees. They watched Hop-a-long Cassidy movies ... Movietone newsreels etc. “Rosebud Football Club held its annual ball through the 1930s at The

WE URGENTLY NEED YOUR HELP!

That was then: A pre-war street scene with film posters outside the original foyer.Picture: Supplied Family affair: Paul and Lloyd Whitaker in front of the old cinema building in their family for 90 years. Picture: Yanni Fashionable ladies: A Broadway fashion show in the 1940s. Picture: Supplied

Broadway. Fashion parades with the local ‘lasses’ were popular ... with Marie Dunk, Wendy Peebles and Barbara Ditchburn competing on stage. “When the war finished, a ball was held in honour of returned servicemen. There was a free Christmas family movie every year. “The dress shop on the corner was run by Mrs Luck and later by the Molineaux sisters.” Mr Whitaker said The Broadways bouncer was involved in a few notable “rumbles” – even throwing two over-

refreshed soldiers off the old Rosebud jetty (opposite Rosebud Parade). “A well-known Rosebud identity was Mick Dunk. Everyone remembers him selling movie tickets out of the little office on the left of the foyer. “Then there was the ‘etiquette’ of movie going, such as rolling Jaffas down the aisles and under the seats; standing to attention for God Save The Queen at the start of every movie, and sneaking in the side toilet door after jumping the back fence – only to be caught by the scruff of the

neck by Mick. “Those were the days, and still in the memory of many a local!” he said. CBRE agent Nick Hage said the property would be “repositioned” after passing in on Saturday 26 October for $4.25 million. He said short-term leases would be consolidated to provide more security for prospective buyers. Other cinema buildings to change hands recently include The Peninsula Cinemas at Rosebud and Sorrento sold on behalf of the Kirby family for a combined $9.37 million.

BECOME A COMMITTEE FOR MORNINGTON PENINSULA

The vision of the Committee for Mornington Peninsula (C4MP) is for a Peninsula where people can live, embrace the landscape and nature, contribute to the community, learn and earn within the region and not be forced to leave to pursue a career and economic goals elsewhere for themselves and their families. C4MP aims to lift the prominence of the region in the plans and thinking of policy makers, governments and decision makers and to promote a wider and deeper understanding of the region, its sustainable potential and challenges. C4MP works to bring together community and business-minded people on the Peninsula, who are committed to this region, understand the challenges we face, can imagine new possibilities for our community, are optimistic about the future and share a passion to work collaboratively and constructively for better outcomes for the Peninsula. The C4MP has adopted its Strategic Plan 2019-2022 focusing on key policy pillar and priorities: – Availability of suitably-zoned land to support sustainable investment, growth and jobs – Securing ‘regional’ designation and access to commensurate support – Improving & developing infrastructure that supports economic activity and jobs

– Ensuring access to training & education opportunities that support sustainable careers – Nurture a supportive & ‘businessfriendly’ environment – Ensure ongoing C4MP viability, vitality and relevance Be a part of the Committee for Mornington and make a contribution to this new organization seeking to have a meaningful and positive impact on the Mornington Peninsula. The Association works beyond electoral cycles and partisan politics with the aim of enhancing the social, economic and environmental sustainability to improve living standards, growth and sustainability of the region. We all love living and working on the Peninsula. Our future centres around creating sustainable opportunities and the best living conditions for every generation. Interested in C4MP and our region’s future? Visit C4MP can be obtained via www.committeeformp.com.au for information about membership and participation opportunities.