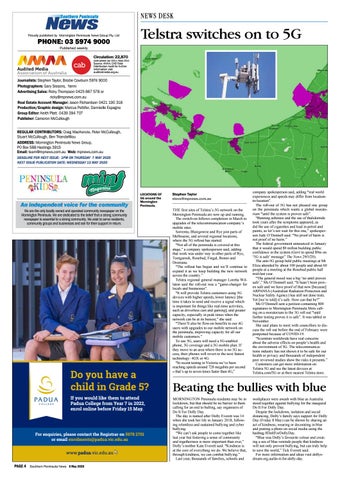 Telstra switches on to 5G

LOCATIONS OF 5G around the Mornington Peninsula.

Do you have a child in Grade 5? If you would like them to attend Padua College from Year 7 in 2022, enrol online before Friday 15 May.

For enquiries, please contact the Registrar on 5978 2701 or email enrolments@padua.vic.edu.au

Stephen Taylor steve@mpnews.com.au THE first sites of Telstra’s 5G network on the Mornington Peninsula are now up and running. The switch-on follows completion in March to upgrades of the telecommunication company’s mobile sites. Sorrento, Blairgowrie and Rye join parts of Melbourne, and several regional locations, where the 5G rollout has started. “Not all of the peninsula is covered at this stage,” a company spokesperson said, adding that work was under way in other parts of Rye, Tootgarook, Rosebud, Fingal, Boneo and Dromana. “The rollout has begun and we’ll continue to expand it as we keep building the new network across the country.” Telstra regional general manager Loretta Willaton said the roll-out was a “game-changer for locals and businesses”. “It will provide Telstra customers using 5G devices with higher speeds, lower latency [the time it takes to send and receive a signal which is important for things like real-time activities, such as driverless cars and gaming], and greater capacity, especially in peak times when the network can be at its busiest,” she said. “There’ll also be flow-on benefits to our 4G users with upgrades to our mobile network on the peninsula, improving capacity for all our mobile customers.” To use 5G, users will need a 5G-enabled phone, 5G coverage and a 5G mobile plan. If they move to an area where there is no 5G access, their phones will revert to the next fastest technology: 4GX or 4G. “In recent testing in Victoria we’ve been reaching speeds around 728 megabits per second – that’s up to seven times faster than 4G,”

company spokesperson said, adding “real world experiences and speeds may differ from locationto-location”. The roll-out of 5G has not pleased one group on the peninsula which wants a global moratorium “until the system is proven safe”. “Banning asbestos and the use of thalidomide took years after the symptoms appeared, as did the use of cigarettes and lead in petrol and paints, so let’s not wait for this one,” spokesperson Judy O’Donnell said. “No proof of harm is not proof of no harm.” The federal government announced in January that it would spend $9 millon building public confidence in the system (Govt to spend $9m on ‘5G is safe’ message” The News 29/1/20). The anti-5G group held public meetings at Mt Eliza attended by about 100 people and about 60 people at a meeting at the Rosebud public hall mid-last year. “The general mood was a big ‘no until proven safe’,” Ms O’Donnell said. “It hasn’t been proven safe and we have proof of that now [because] ARPANSA (Australian Radiation Protection and Nuclear Safety Agency) has still not done tests. Yet [we’re told] it’s safe. How can that be?” Ms O’Donnell sent a petition containing 800 signatures to Mornington Peninsula Shire calling on a moratorium to the 5G roll out “until further testing proves it is safe”. It was tabled in November. She said plans to meet with councillors to discuss the roll out before the end of February were postponed because of COVID-19. “Scientists worldwide have real concerns about the adverse effects on people’s health and the environment of 5G. The telecommunications industry has not shown it to be safe for our health or privacy and thousands of independent peer reviewed studies show the risks it presents.” Customers can get more information on Telstra 5G and see the latest devices at Telstra.com/5G or at their nearest Telstra store.

Beating the bullies with blue MORNINGTON Peninsula residents may be in lockdown, but that should be no barrier to them calling for an end to bulling, say organisers of Do It For Dolly Day. The day is named after Dolly Everett was 14 when she took her life in January 2018, following relentless and sustained bullying and cyber bullying. “We can’t ask people to come together like last year but fostering a sense of community and togetherness is more important than ever,” Dolly’s mother Kate Everett said. “Kindness is at the core of everything we do. We believe that, through kindness, we can combat bullying.” Last year, thousands of families, schools and

workplaces were awash with blue as Australia stood together against bullying for the inaugural Do It For Dolly Day. Despite the lockdown, isolation and social distancing, Dolly’s family says support for Dolly Day (Friday 8 May) can be shown by sharing an act of kindness, wearing or decorating in blue and posting a photo on social media using the hashtag #DoItForDollyDay. “Blue was Dolly’s favourite colour and creating a sea of blue reminds people that kindness will not only prevent bullying, but can truly help to save the world,” Tick Everett said. For more information and ideas visit dollysdream.org.au/do-it-for-dolly-day.