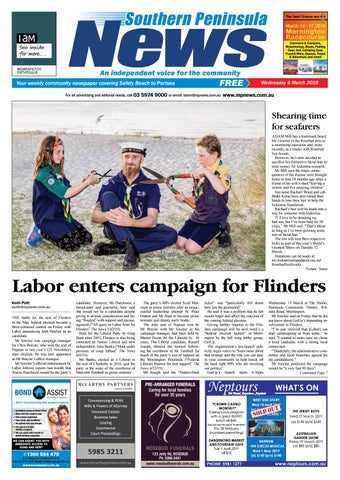 For all advertising and editorial needs, call 03

Shearing time for seafarers ADAM Mill has a trademark beard. He’s known in the Rosebud area as a swimming instructor and, more recently, as a leader with Rosebud Sea Scouts. However, he’s now decided to sacrifice his distinctive facial hair to raise money for leukemia research. Mr Mill says the tragic consequences of the disease were brought home to him 18 months ago when a friend of his wife’s died “leaving a widow and five amazing children”. Sea scout Rachael Wood and cub Blake Kelso have also raised their hands to lose their hair to help the leukemia foundation. Rachael’s hair will be made into a wig for someone with leukemia. “I’d love to be donating my hair too, but I’ve been bald for 20 years,” Mr Mill said. “That’s about as long as I’ve been growing some sort of facial hair.” The trio will lose their respective locks as part of this year’s World’s Greatest Shave on Tuesday 12 March. Donations can be made at: my.leukaemiafoundation.org.au/ RosebudSeaScouts Picture: Yanni

Labor enters campaign for Flinders Keith Platt keith@mpnews.com.au THE battle for the seat of Flinders in the May federal election became a three-cornered contest on Friday with Labor announcing Josh Sinclair as its candidate. Mr Sinclair was campaign manager for Chris Brayne, who won the seat of Nepean in last year’s (24 November) state election. He was later appointed as Mr Brayne’s office manager. Mr Sinclair’s official endorsement by Labor follows reports last month that Tracee Hutchison would be the party’s

candidate. However, Ms Hutchison, a broadcaster and journalist, later said she would not be a candidate despite giving it serious consideration and being “flooded” with support and encouragement (“All quiet on Labor front for Flinders” The News 13/2/19). Held for the Liberal Party by Greg Hunt since 2001, Flinders is also being contested by former Liberal and now independent, Julia Banks (“Hunt under pressure of coup fallout” The News 6/2/19). Ms Banks, elected as a Liberal to the seat of Chisholm in 2016, quit the party in the wake of the overthrow of Malcolm Turnbull as prime minister.

The party’s MPs elected Scott Morrison as prime minister after an unsuccessful leadership attempt by Peter Dutton and Mr Hunt to become prime minister and deputy party leader. The state seat of Nepean won by Mr Brayne with Mr Sinclair as his campaign manager, had been held by Martin Dixon for the Liberals by 16 years. The Liberal candidate, Russell Joseph, blamed the turmoil following the overthrow of Mr Turnbull for much of the party’s loss of support on the Mornington Peninsula (“Federal Liberals blamed for lost support” The News 4/12/19). Mr Joseph said the “Dutton-Hunt

ticket” was “particularly felt down here [on the peninsula]”. He said it was a problem that he felt would linger and affect the outcome of the coming federal election. Giving further impetus to the Flinders campaign will be next week’s a “federal election launch” in Mornington by the left wing lobby group, GetUp. The organisation’s pre-launch publicity urges voters to “learn more about that strategy and the role you can play in your community to help knock off the hard right MPs who are wrecking our politics”. GetUp’s launch starts 6.30pm

Wednesday 13 March at The Studio, Peninsula Community Theatre, Wilsons Road, Mornington. Mr Sinclair said on Friday that he did not know about GetUp’s impending involvement in Flinders. “I’m just relieved that [Labor] can start campaigning as from today,” he said. “I wanted to make sure we chose a local candidate with a strong local connection. “Thankfully, the administrative committee and local branches agreed [to my candidature].” Mr Sinclair predicted the campaign would be “a very fast 90 days”. Continued Page 7

Only p/p over the age of 18 permitted.