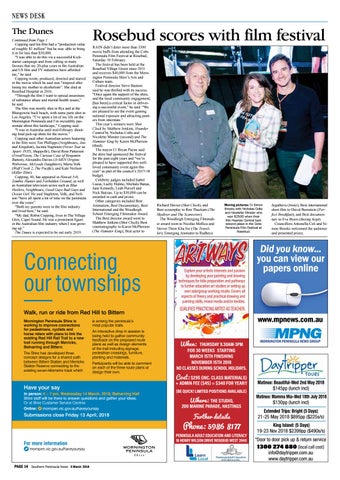 The Dunes Continued from Page 1 Copping said his film had a “production value of roughly $1 million” but he was able to bring it in for less than $50,000. “I was able to do this via a successful Kickstarter campaign and from calling in many favours that my 20-plus years in the Australian and US film and TV industries have afforded me,” he said. Copping wrote, produced, directed and starred in the movie which he said was “inspired after losing my mother to alcoholism”. She died at Rosebud Hospital in 2016. “Through the film I want to spread awareness of substance abuse and mental health issues,” he said. The film was mostly shot in Rye and at the Blairgowrie back beach, with some parts shot in Los Angeles. “I’ve spent a lot of my life on the Mornington Peninsula and I’m incredibly passionate about this landscape,” Copping said. “I was in Australia until mid-February shooting final pick-up shots for the movie.” Copping said other Australian actors featuring in the film were Tim Phillipps (Neighbours, Animal Kingdom), Jacinta Stapleton (Never Tear us Apart: INXS, Shappelle), David Ross Patterson (Frost/Nixon, The Curious Case of Benjamin Button), Alexandra Davies (X-MEN Origins: Wolverine, McLeods Daughters), Maria Volk (Wolf Creek 2, The Pacific), and Kate Neilson (Killer Elite). Copping, 40, has appeared in Hawaii 5-0, Zombie Hunter and Forbidden Ground, as well as Australian television series such as Blue Heelers, Neighbours, Good Guys Bad Guys and Ocean Girl. He said Stapleton, Volk, and Neilson “have all spent a lot of time on the peninsula over the years”. “Both my parents were in the film industry and lived here,” he said. “My dad, Robin Copping, lives in The Village Glen, Capel Sound. He was a prominent figure in the Australian film industry when I was growing up.” The Dunes is expected to be out early 2019.

Rosebud scores with film festival RAIN didn’t deter more than 3500 movie buffs from attending the Cobs Peninsula Film Festival at Rosebud, Saturday 10 February. The festival has been held at the Rosebud Village Green since 2011 and receives $40,000 from the Mornington Peninsula Shire’s Arts and Culture team. Festival director Steve Bastoni said he was thrilled with its success. “Once again the support of the shire, and the local community engagement, [has been] a critical factor in delivering a successful event,” he said. “We are pleased to see the event gaining national exposure and attracting punters from interstate.” This year’s winners were Shot Clock by Matthew Jenkins; Hoarder Control by Nicholas Colla and Nicolette Minster (second) and The Hamster King by Karen McPherson (third). The mayor Cr Bryan Payne said the shire had sponsored the festival for the past eight years and “we’re pleased to have supported this wellloved community event again this year” as part of the council’s 2017-18 budget. Celebrity judges included Isabel Lucas, Lachy Hulme, Michala Banas, Jane Kennedy, Leah Purcell and Nick Batzias. Up to $30,000 can be awarded in cash and prizes. Other categories included Best Animation, Best Documentary, Best International and the Woodleigh School Emerging Filmmaker Award. The Best director award went to Matthew Jenkins (Shot Clock), Best cinematography to Karen McPherson (The Hamster King), Best actor to

Connecting our townships Walk, run or ride from Red Hill to Bittern Mornington Peninsula Shire is working to improve connections for pedestrians, cyclists and horse riders with plans to link the existing Red Hill Rail Trail to a new trail running through Merricks, Balnarring and Bittern. The Shire has developed three concept designs for a shared path between Bittern Station and Merricks Station Reserve connecting to the existing seven-kilometre track which

Explore your artistic interests and passion by developing your painting and drawing techniques for folio preparation and pathways to further education art studies or setting up own solo/group working studio. Covers all aspects of theory and practical drawing and painting skills, mixed media and/or textiles.

Participants will be able to comment on each of the three route plans or design their own.

Have your say In person: 5 – 7 pm, Wednesday 14 March, 2018, Balnarring Hall Shire staff will be there to answer questions and gather your ideas. Or at Shire Customer Service Centres Online: mornpen.vic.gov.au/haveyoursay

is among the peninsula’s most popular trails. An interactive drop in session is being held to gather community feedback on the proposed route plans as well as design elements of the trail including signage, pedestrian crossings, furniture, planting and materials.