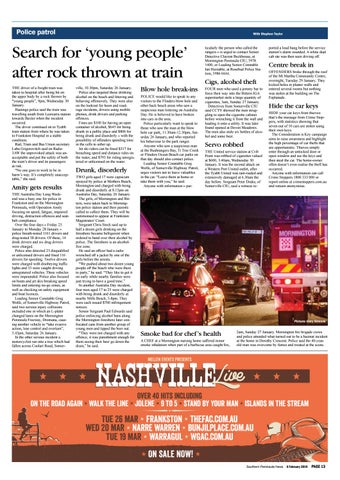 Search for ‘young people’ after rock thrown at train THE driver of a freight train was taken to hospital after being hit on the upper body by a rock thrown by “young people”, 9pm, Wednesday 30 January. Hastings police said the train was travelling south from Leawarra station towards Baxter when the incident occurred. The driver continued on to Tyabb train station from where he was taken to Frankston Hospital in a stable condition. Rail, Tram and Bus Union secretary Luba Grigorovitch said on Radio 3AW the unprovoked attack was unacceptable and put the safety of both the train’s driver and its passengers at risk. “No one goes to work to be in harm’s way. It’s completely unacceptable,” she said.

Amity gets results THE Australia Day Long Weekend was a busy one for police in Frankston and on the Mornington Peninsula, with Operation Amity focusing on speed, fatigue, impaired driving, distraction offences and seatbelt compliance. Over the four days – Friday 25 January to Monday 28 January – police breath-tested 1161 drivers and drug-tested 38 drivers. Of these, 14 drink drivers and six drug drivers were charged. Police also detected 23 disqualified or unlicensed drivers and fined 116 drivers for speeding. Twelve drivers were charged with disobeying traffic lights and 33 were caught driving unregistered vehicles. Three vehicles were impounded. Police also focused on boats and jet skis breaking speed limits and entering no-go zones, as well as checking on safety equipment and boat licences. Leading Senior Constable Greg Wolfe, of Somerville Highway Patrol, said two serious injury collisions included one in which an L-plater changed lanes on the Mornington Peninsula Freeway, Dromana, causing another vehicle to “take evasive action, lose control and overturn”, 5.45pm, Saturday 26 January. In the other serious incident a motorcyclist ran into a tree which had fallen across Coolart Road, Somer-

ville, 10.30pm, Saturday 26 January. Police also targeted those drinking alcohol on the beach and littering and behaving offensively. They were also on the lookout for hoon and roadrage incidents, drivers using mobile phones, drink drivers and parking offences. Fines are $100 for having an open container of alcohol, $645 for being drunk in a public place and $806 for being drunk and disorderly – with the possibility of offenders spending time in the cells to sober up. Jet ski riders can be fined $317 for breaching speed and distance rules on the water, and $793 for riding unregistered or unlicensed on the water.

Drunk, disorderly TWO girls aged 17 were capsicum sprayed by police at Mothers Beach, Mornington and charged with being drunk and disorderly at 8.15pm on Australia Day, Saturday 26 January. The girls, of Mornington and Bittern, were taken back to Mornington police station and their parents called to collect them. They will be summonsed to appear at Frankston Magistrates’ Court. Sergeant Chris Stock said up to half a dozen girls drinking on the foreshore became belligerent when ordered to hand over their alcohol by police. The foreshore is an alcoholfree zone. He said an officer had a radio wrenched off a jacket by one of the girls before the arrests. “We pushed about two dozen young people off the beach who were there to party,” he said. “They like to get it on early while nearby families were just trying to have a good time.” In another Australia Day incident, four men aged 17 to 25 were charged with being drunk and disorderly at nearby Mills Beach, 5-8pm. They were each issued $700 infringement notices. Senior Sergeant Paul Edwards said police enforcing alcohol bans along the Mornington foreshore later confiscated cans from another group of young men and tipped the beer out. “They were not charged with any offence; it was punishment enough for them seeing their beer go down the drain,” he said.

Blow hole break-ins POLICE would like to speak to any visitors to the Flinders blow hole and other back beach areas who saw a suspicious man loitering on Australia Day. He is believed to have broken into cars in the area. Police particularly want to speak to those who saw the man at the blow hole car park, 11.30am-12.30pm, Saturday 26 January, and who reported his behaviour to the park ranger. Anyone who saw a suspicious man at the Bushrangers Bay, Ti Tree Creek or Flinders Ocean Beach car parks on that day should also contact police. Leading Senior Constable Greg Wolfe, of Somerville Highway Patrol, urges visitors not to leave valuables in the car. “Leave them at home or take them with you,” he said. Anyone with information – par-

Cigs, alcohol theft FOUR men who used a jemmy bar to force their way into the Bittern IGA supermarket stole a large quantity of cigarettes, 3am, Sunday 27 January. Detectives from Somerville CIU said CCTV showed the men struggling to open the cigarette cabinet before wrenching it from the wall and loading it onto a utility. It was later found opened at Devon Meadows. The men also stole six bottles of alcohol and some beer.

Servo robbed THE United service station at Crib Point was robbed of cigarettes valued at $600, 3.40am, Wednesday 30 January. It was the second attack on a Western Port United outlet, after the Tyabb United was ram-raided and extensively damaged at 4.30am the day before. Sergeant Peter Drake, of Somerville CIU, said a witness re-

ported a loud bang before the service station’s alarm sounded. A white dual cab ute was then seen driving off.

Centre break in OFFENDERS broke through the roof of the Mt Martha Community Centre, overnight, Tuesday 29 January. They kicked holes in plaster walls and entered several rooms but nothing was stolen at the building on The Esplanade.

Hide the car keys HIDE your car keys from thieves: that’s the message from Crime Stoppers, with statistics showing that seven out of 10 cars are stolen using their own keys. The Consideration is Key campaign aims to raise awareness and highlight the high percentage of car thefts that are opportunistic. Thieves simply enter through an unlocked door or open window and see the keys and then steal the car. The home-owner often doesn’t even realise the theft has occurred. Anyone with information can call Crime Stoppers 1800 333 000 or report online at crimestoppers.com.au and remain anonymous.

2am, Sunday 27 January. Mornington fire brigade crews and police attended what turned out to be a hazmat incident at the home in Dorothy Crescent. Police said the 40-yearold man was overcome by fumes and treated at the scene.