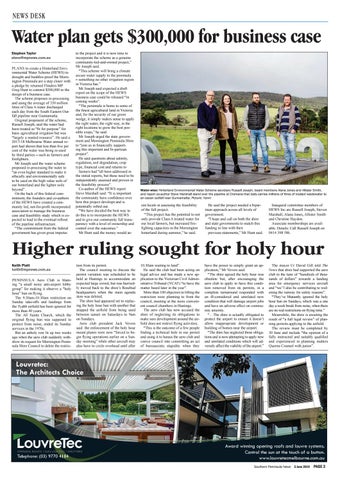 Water plan gets $300,000 for business case Stephen Taylor steve@mpnews.com.au PLANS to create a Hinterland Environmental Water Scheme (HEWS) to drought and bushfire-proof the Mornington Peninsula are a step closer with a pledge by returned Flinders MP Greg Hunt to commit $300,000 to the design of a business case. The scheme proposes re-processing and using the average of 350 million litres of Class A water discharged each day from the South Eastern Outfall pipeline near Gunnamatta. Original proponent of the scheme, Russell Joseph, said the water had been treated as “fit for purpose” for basic agricultural irrigation but was “largely a wasted resource”. He said a 2017-18 Melbourne Water annual report had shown that less than five per cent of the water was being re-used by third parties – such as farmers and firefighters. Mr Joseph said the water scheme proposed re-processing the water to “an even higher standard to make it ethically and environmentally safe to be used on the high value soils of our hinterland and the lighter soils beyond”. On the back of this federal commitment, the founders and co-authors of the HEWS have created a community led, not-for-profit incorporated association to manage the business case and feasibility study which is expected to lead to the eventual rollout of the pipeline infrastructure. “The commitment from the federal government has given great impetus

to the project and it is now time to incorporate the scheme as a genuine community-led-and-owned project,” Mr Joseph said. “This scheme will bring a climate secure water supply to the peninsula – something no other irrigation region in Victoria has.” Mr Joseph said expected a draft report on the scope of the HEWS business case could be released “in coming weeks”. “The peninsula is home to some of the finest agricultural land in Victoria and, for the security of our green wedge, it simply makes sense to apply the right water, the right way, in the right locations to grow the best possible crops,” he said. Mr Joseph urged the state government and Mornington Peninsula Shire to “join us in financially supporting this important and bi-partisan project”. He said questions about salinity, regulation, soil degradation, crop type, financial cost and returns to farmers had “all been addressed in the initial reports, but these need to be independently assessed and proven in the feasibility process”. Co-author of the HEWS report Steve Marshall said: “It is important the community have confidence over how this project develops and is potentially rolled out. “We have decided the best way to do this is to incorporate the HEWS and to give our community full transparency with a level of ownership and control over the outcomes.” Mr Hunt said the money would as-

sist locals in assessing the feasibility of the full project. “This project has the potential to not only provide Class A treated water for our local farmers, but increased firefighting capacities in the Mornington hinterland during summer,” he said.

He said the project needed a bipartisan approach across all levels of government. “I hope and call on both the shire and state governments to match this funding in line with their previous statements,” Mr Hunt said.

Higher ruling sought for holy hour Keith Platt keith@mpnews.com.au PENINSULA Aero Club is blaming “a small noisy anti-airport lobby group” for making it observe a “holy hour” ban on flying. The 9.30am-10.30am restriction on Sunday take-offs and landings from the Tyabb airfield has been ignored for more than 40 years. The All Saints Church, which the original flying ban was supposed to protect from noise, ended its Sunday services in the 1970s. But an unholy row lit up two weeks ago when the aero club suddenly withdrew its request for Mornington Peninsula Shire Council to delete the restric-

tion from its permit. The council meeting to discuss the permit variation was scheduled to be held at Hastings to accommodate an expected large crowd, but was hurriedly moved back to the shire’s Rosebud headquarters when the main agenda item was deleted. The shire had appeared set to replacing the holy hour ban with another that stopped the airfield from being used between sunset on Saturdays to 9am on Sundays. Aero club president Jack Vevers said the enforcement of the holy hour meant planes were now “forced to begin flying operations earlier on a Sunday morning” while other aircraft may also have to circle overhead until after

10.30am waiting to land”. He said the club had been acting on legal advice and has made a new application to the Victorian Civil Administrative Tribunal (VCAT) “to have the matter heard later in the year”. More than 100 objectors to lifting the restriction were planning to front the council, meeting at the more convenient council chambers in Hastings. The aero club has now accused the shire of neglecting its obligations to make sure development around the airfield does not restrict flying activities. “This is the outcome of a few people finding a technical hole in our permit and using it to harass the aero club and coerce council into committing an act of bureaucratic stupidity when they

have the power to simply grant an application,” Mr Vevers said. “The shire agreed the holy hour was obsolete but, after encouraging the aero club to apply to have this condition removed from its permits, in a complete turnaround responded with an ill-considered and unrelated new condition that will damage airport jobs and have an adverse effect on community amenity. “... The shire is actually obligated to protect the airport to ensure it doesn’t allow inappropriate development or building of homes near the airport. “The shire has neglected those obligations and is now attempting to apply new and unrelated conditions which will adversely affect the viability of the airport.”

The mayor Cr David Gill told The News that shire had supported the aero club to the tune of “hundreds of thousands of dollars” towards a landing area for emergency services aircraft and “we’’l also be contributing to widening the runway for safety reasons”. “They’ve bltatantly ignored the holy hour ban on Sundays, which was a one day a week break from noise, when there are no real restrictions on flying time.” Meanwhile, the shire is awaiting the result of “a full legal review” of planning permits applying to the airfield. The review must be completed by 30 June and include “the opinion of a fully instructed and suitably qualified and experienced in planning matters Queens Counsel with junior”.

Award winning opening roofs and louvre systems. Control the sun at the touch of a button. www.louvretecmelbourne.com.au Southern Peninsula News