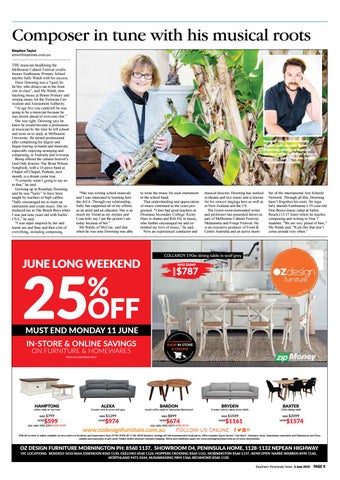 Composer in tune with his musical roots Stephen Taylor steve@mpnews.com.au

“She was writing school musicals and I was interested in learning how she did it. Through our relationship, Sally has supported all of my efforts as an artist and an educator. She is as much my friend as my mentor and I can truly say I am the person I am today because of her.” Ms Walsh, of McCrae, said that when he was nine Downing was able

to write the music for each instrument in the school band. That understanding and appreciation of music continued as the years progressed. “I also had great teachers at Dromana Secondary College: Kirsty Dare in drama and Rob Ely in music, who further encouraged me and cemented my love of music,” he said. Now an experienced conductor and

musical director, Downing has worked in theatre and live music and is known for his concert stagings here as well as in New Zealand and the US. The Green room-nominated writer and performer has presented shows as part of Melbourne Cabaret Festival, Midsumma and Fringe Festival. He is an executive producer of Front &amp; Centre Australia and an active mem-

ber of the international Arts Schools Network. Through all this, Downing hasn’t forgotten his roots: He regularly attends Eastbourne’s 35-year-old Don Bosco music camp at Safety Beach (13-15 June) where he teaches composing and writing to Year 7 students. “We are very proud of him,” Ms Walsh said. “Kids like that don’t come around very often.”

THE musician headlining the Melbourne Cabaret Festival credits former Eastbourne Primary School teacher Sally Walsh with his success. Drew Downing was a “quiet little boy who always sat in the front row in class”, said Ms Walsh, now teaching music at Boneo Primary and writing music for the Victorian Curriculum and Assessment Authority. “At age five you could tell he was going to be a musician because he was streets ahead of everyone else.” She was right. Downing says he knew he would become a professional musician by the time he left school and went on to study at Melbourne University. He turned professional after completing his degree and began touring in bands and musicals, especially enjoying arranging and composing, in Australia and overseas. Being offered the cabaret festival’s God Only Knows: The Brian Wilson Songbook, with a 14-piece band at Chapel off Chapel, Prahran, next month, is a dream come true. “I certainly wasn’t going to say no to that,” he said. Growing up in Rosebud, Downing said he was “lucky” to have been taught by teachers of high calibre. “Sally encouraged me to learn an instrument and create music. She introduced me to The Beach Boys when I was just nine years old with Surfin’ USA,” he said. “I was super inspired by her and learnt sax and flute and then a bit of everything, including composing.

round coffee table in Tasmanian blackwood WAS $899 NOW