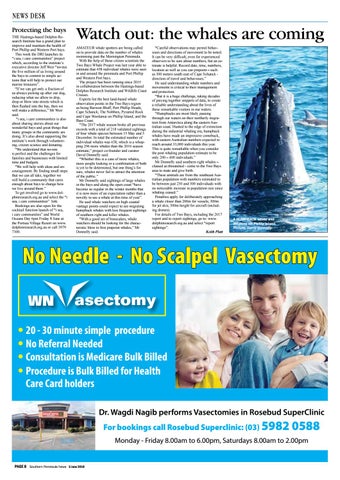 NEWS DESK Protecting the bays THE Hastings-based Dolphin Research Institute has a grand plan to improve and maintain the health of Port Phillip and Western Port bays. This week the DRI launches its “i sea, i care communities” project which, according to the institute’s executive director Jeff Weir “invites the five million of us living around the bays to commit to simple actions that will help to protect our marine treasures”. “If we can get only a fraction of us always picking up after our dog, reducing what we allow to drip, drop or blow into streets which is then flushed into the bay, then we will make a difference,” Mr Weir said. “i sea, i care communities is also about sharing stories about our wonderful bays and great things that many groups in the community are doing. It’s also about supporting the institute’s work through volunteering, citizen science and donating. “We understand that no-one is perfect and the challenges for families and businesses with limited time and budgets. “We will help with ideas and encouragement. By finding small steps that we can all take, together we will build a community that cares enough about bays to change how we live around them.” To get involved go to www.dolphinresearch.org.au and select the “i sea, i care communities” link. Bookings are also open for the cocktail function launch of “i sea, i care communities” and World Oceans Day 6pm Friday 8 June at the Portsea Village Resort on www. dolphinresearch.org.au or call 5979 7100.

Watch out: the whales are coming AMATEUR whale spotters are being called on to provide data on the number of whales swimming past the Mornington Peninsula. With the help of these citizen scientists the Two Bays Whale Project was last year able to estimate that 458 individual whales were seen in and around the peninsula and Port Phillip and Western Port bays. The project has been running since 2015 in collaboration between the Hastings-based Dolphin Research Institute and Wildlife Coast Cruises. Experts list the best land-based whale observation points in the Two Bays region as being Barwon Bluff; Port Phillip Heads; Cape Schanck; The Nobbies, Pyramid Rock and Cape Woolamai on Phillip Island; and the Bass Coast. “The 2017 whale season broke all previous records with a total of 218 validated sightings of four whale species between 15 May and 5 December. In total the estimated number of individual whales was 458, which is a whopping 296 more whales than the 2016 season estimate,” project co-founder and curator David Donnelly said. “Whether this is a case of more whales, more people looking or a combination of both is yet to be determined, but one thing’s for sure, whales never fail to attract the attention of the public.” Mr Donnelly said sightings of large whales in the bays and along the open coast “have become so regular in the winter months that it is now more of an expectation rather than a novelty to see a whale at this time of year”. He said whale watchers on high coastal vantage points could expect to see migrating humpback whales with less frequent sightings of southern right and killer whales. “With a good set of binoculars, whale watchers should be looking for the characteristic blow to first pinpoint whales,” Mr Donnelly said.

“Careful observations may permit behaviours and directions of movement to be noted. It can be very difficult, even for experienced observers to be sure about numbers, but an estimate is helpful. Record date, time, numbers, location as well as you can pinpoint – such as 500 meters south east of Cape Schanck direction of travel and behaviours.” He said understanding whale numbers and movements is critical to their management and protection. “But it is a huge challenge, taking decades of piecing together snippets of data, to create a reliable understanding about the lives of these remarkable visitors in our waters. “Humpbacks are most likely passing through our waters on their northerly migration from Antarctica along the eastern Australian coast. Hunted to the edge of extinction during the industrial whaling era, humpback whales have made an impressive comeback, with eastern Australian numbers expected to reach around 33,000 individuals this year. This is quite remarkable when you consider the post whaling population estimate to be only 200 – 400 individuals.” Mr Donnelly said southern right whales – classed as threatened - come to the Two Bays area to mate and give birth. “These animals are from the southeast Australian population with numbers estimated to be between just 250 and 300 individuals with no noticeable increase in population size since whaling ceased.” Penalties apply for deliberately approaching a whale closer than 200m for vessels; 300m for jet skis; 500m height for aircraft (including drones). For details of Two Bays, including the 2017 report and to report sightings, go to: www. dolphinresearch.org.au and select “report sightings”. Keith Platt