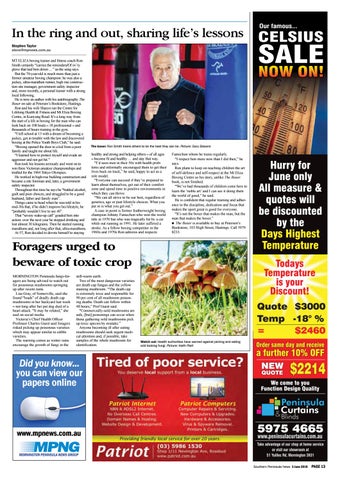 In the ring and out, sharing life’s lessons Stephen Taylor steve@mpnews.com.au MT ELIZA boxing trainer and fitness coach Ron Smith certainly “carries the reminders/Of ev’ry glove that laid him down …” as the song says. But the 74-year-old is much more than just a former amateur boxing champion: he was also a jockey, ultra-marathon runner, high rise construction site manager, government safety inspector and, more recently, a personal trainer with a strong local following. He is now an author with his autobiography The Boxer on sale at Petersen’s Bookstore, Hastings. Ron and his wife Sharyn run the Centre for Lifelong Health & Fitness and Mt Eliza Boxing Centre, in Kunyung Road. It’s a long way from the start of a life in boxing for the man who can look back on 108 bouts – 18 professional – and thousands of hours training in the gym. “I left school at 13 with a dream of becoming a jockey, got in trouble with the law and discovered boxing at the Police Youth Boys Club,” he said. “Boxing opened the door to a kid from a poor family and taught me about life. “I learned how to protect myself and evade an aggressor and not get hit.” Ron took his lessons seriously and went on to win three Victorian amateur championships and trialled for the 1964 Tokyo Olympics. He worked in high-rise building construction and became a site foreman and, later, a government safety inspector. Throughout this time he says he “battled alcohol, guilt and poor choices; and struggled to be a good husband, father and family man”. Things came to head when he was told in his mid-30s that, if he didn’t improve his lifestyle, he “probably wouldn’t live to see 40”. That “severe wake-up call” goaded him into action: over the next year he stopped drinking and lost almost 30 kilograms. Then he started running marathons and, not long after that, ultra-marathons. At 57, Ron decided to devote himself to staying

The boxer: Ron Smith trains others to be the best they can be. Picture: Gary Sissons

healthy and strong and helping others – of all ages – become fit and healthy … and stay that way. “I’d seen men in their 50s with health problems and informally encouraged them to get their lives back on track,” he said, happy to act as a role model. “Everyone can succeed if they’re prepared to learn about themselves, get out of their comfort zone and spend time in positive environments in which they can thrive. “We can all strive to be our best, regardless of genetics, age or past lifestyle choices. What you put in is what you get out.” A case in point is former featherweight boxing champion Johnny Famechon who won the world title in 1970 but who was tragically hit by a car while out running in 1991. He later suffered a stroke. As a fellow boxing competitor in the 1960s and 1970s Ron admires and respects

still-warm earth. Two of the most dangerous varieties are death cap fungus and the yellow staining mushroom. “The death cap is extremely toxic and responsible for 90 per cent of all mushroom poisoning deaths. Death can follow within 48 hours,” Prof Guest said. “Commercially-sold mushrooms are safe, [but] poisonings can occur when those gathering wild mushrooms pick up toxic species by mistake.” Anyone becoming ill after eating mushrooms should seek urgent medical attention and, if possible, take samples of the whole mushroom for identification.

Famechon whom he trains regularly. “I respect him more now than I did then,” he says. Ron plans to keep on teaching children the art of self-defence and self-respect at the Mt Eliza Boxing Centre so his story, unlike The Boxer book, is not finished. “We’ve had thousands of children come here to learn the ‘noble art’ and I can see it doing them the world of good,” he said. He is confident that regular training and adherence to the discipline, dedication and focus that makes the sport great is good for everyone. “It’s not the boxer that makes the man, but the man that makes the boxer.” n The Boxer is available to buy at Petersen’s Bookstore, 103 High Street, Hastings. Call 5979 8233.

Foragers urged to beware of toxic crop MORNINGTON Peninsula fungi-foragers are being advised to watch out for poisonous mushrooms springing up after recent rains. Lisa Gray, of Somerville, said she found “loads” of deadly death cap mushrooms in her backyard last week – not long after her pet dog died of a heart attack. “It may be related,” she said on social media. Victoria’s Chief Health Officer Professor Charles Guest said foragers risked picking up poisonous varieties which may appear similar to edible varieties. The warning comes as winter rains encourage the growth of fungi in the

Hurry for June only All measure & quotes will be discounted by the Days Highest Temperature Todays Temperature is your Discount! Quote $3000 Temp -18° % = $2460

a further 10% OFF NEW QUOTE

Take advantage of our shop at home service or visit our showroom at 51 Yuilles Rd, Mornington 3931 Southern Peninsula News 5 June 2018