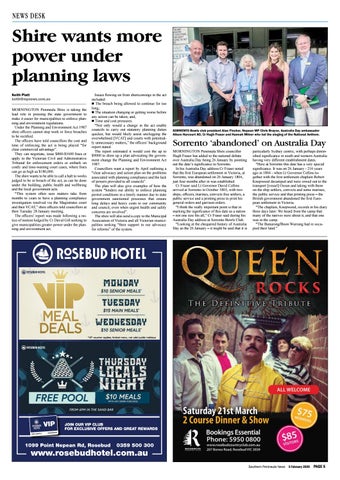 Shire wants more power under planning laws Keith Platt keith@mpnews.com.au MORNINGTON Peninsula Shire is taking the lead role in pressing the state government to make it easier for municipalities to enforce planning and environment regulations. Under the Planning and Environment Act 1987 shire officers cannot stop work or force breaches to be rectified. The officers have told councillors the cost and time of enforcing the act is being played “for clear commercial advantage”. They can negotiate, issue $800-$1600 fines or apply to the Victorian Civil and Administrative Tribunal for enforcement orders or embark on costly and time-wasting court cases, where fines can go as high as $180,000. The shire wants to be able to call a halt to works judged to be in breach of the act, as can be done under the building, public health and wellbeing and the local government acts. “This system often sees matters take from months to years to have a planning compliance investigation resolved via the Magistrates court and then VCAT,” shire officers told councillors at their Tuesday 28 January meeting. The officers’ report was made following a notice of motion lodged by Cr David Gill seeking to give municipalities greater power under the planning and environment act.

Issues flowing on from shortcomings in the act included: n The breach being allowed to continue for too long; n The situation changing or getting worse before any action can be taken; and, n Time and cost pressures. “Not only would a change in the act enable councils to carry out statutory planning duties quicker, but would likely assist unclogging the overwhelmed [VCAT] and courts with potentially unnecessary matters,” the officers’ background report stated. The report estimated it would cost the up to $9000 to draw up a plan advocating the government change the Planning and Environment Act 1987. Councillors want a report by April outlining a “clear advocacy and action plan on the problems associated with planning compliance and the lack of powers provided to all councils”. The plan will also give examples of how the system “hinders our ability to enforce planning permit conditions in a timely manner due to state government sanctioned processes that ensure long delays and heavy costs to our community and council, even when urgent health and safety concerns are involved”. The shire will also send a copy to the Municipal Association of Victoria and all Victorian municipalities seeking “their support in our advocacy for reforms” of the system.

Sorrento ‘abandoned’ on Australia Day MORNINGTON Peninsula Shire councillor Hugh Fraser has added to the national debate over Australia Day being 26 January by pointing out the date’s significance to Sorrento. In his Australia Day address Cr Fraser noted that the first European settlement in Victoria, at Sorrento, was abandoned on 26 January 1804, just four months after in was established. Cr Fraser said Lt Governor David Collins arrived at Sorrento in October 1803, with two ships, officers, marines, convicts free settlers, a public service and a printing press to print his general orders and garrison orders. “I think the really important point is that in marking the significance of this date as a nation – not one size fits all,” Cr Fraser said during his Australia Day address at Sorrento Bowls Club. “Looking at the chequered history of Australia Day as the 26 January – it might be said that it is

particularly Sydney centric, with perhaps diminished significance in south and western Australia having very different establishment dates. “Here at Sorrento this date has a very special significance. It was on 26 January - 216 years ago in 1804 - when Lt Governor Collins together with the first settlement chaplain Robert Knopwood decamped and were rowed out to the transport [vessel] Ocean and taking with them on the ship settlers, convicts and some marines, the public service and that printing press – the British government abandoned the first European settlement in Victoria. “The chaplain, Knopwood, records in his diary three days later: We heard from the camp that many of the natives were about it, and that one was in the camp. “The Bunurong/Boon Wurrung had re occupied their land.”