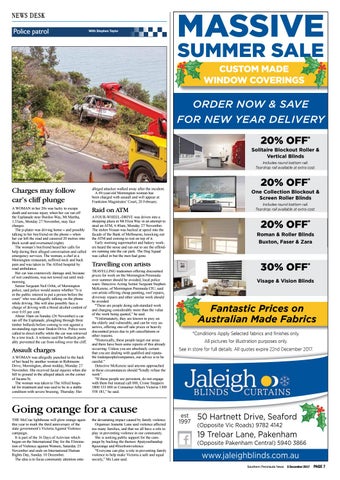 alleged attacker walked away after the incident. A 49-year-old Mornington woman has been charged with assault and will appear at Frankston Magistrates’ Court, 20 February.

A WOMAN in her 20s was lucky to escape death and serious injury when her car ran off the Esplanade near Burdoo Way, Mt Martha, 1.55am, Monday 27 November, may face charges. The p-plater was driving home – and possibly talking to her boyfriend on the phone – when her car left the road and careered 20 metres into thick scrub and overturned (right). The woman’s boyfriend heard her calls for help during their alleged conversation and called emergency services. The woman, a chef at a Mornington restaurant, suffered neck and back pain and was taken to The Alfred hospital by road ambulance. Her car was extensively damage and, because of wet conditions, was not towed out until midmorning. Senior Sergeant Neil Orbit, of Mornington police, said police would assess whether “it is in the public interest to put a person before the court” who was allegedly talking on the phone while driving. She will also possibly face a charge of driving with a blood alcohol content of over 0.05 per cent. About 10am on Sunday (26 November) a car ran off the Esplanade, ploughing through three timber bollards before coming to rest against a no-standing sign near Deakin Drive. Police were called to direct traffic while the car was retrieved by a tow truck. A witness said the bollards probably prevented the car from rolling over the cliff.

Assault charges A WOMAN was allegedly punched to the back of her head by another woman in Robinsons Drive, Mornington, about midday, Monday 27 November. She received facial injuries when she fell to ground in the alleged attack on the corner of Jacana St. The woman was taken to The Alfred hospital for treatment and was said to be in a stable condition with severe bruising, Thursday. Her

A FOUR-WHEEL-DRIVE was driven into a shopping plaza in Mt Eliza Way in an attempt to steal an ATM, 4.40am, Monday 27 November. The stolen Nissan was backed at speed into the facade of the Bank of Melbourne, knocking out the ATM and coming to rest on top of it. Early morning supermarket and bakery workers heard the noise and ran out to see the offenders running into the car park. The Dog Squad was called in but the men had gone.

Travelling con artists TRAVELLING tradesmen offering discounted prices for work on the Mornington Peninsula over summer should be avoided, local police warn. Detective Acting Senior Sergeant Stephen McKenzie, of Mornington Peninsula CIU, said con artists offering cheap painting, roof repairs, driveway repairs and other similar work should be avoided. “These are people doing sub-standard work and charging considerably more than the value of the work being quoted,” he said. “Unfortunately, they are known to prey on the elderly and vulnerable, and can be very assertive, offering one-off sale prices or heavily discounted prices due to job cancellations or other reasons. “Historically, these people target our areas and there have been some reports of this already occurring. Unless you are absolutely certain that you are dealing with qualified and reputable tradespeople/companies, our advice is to be careful.” Detective McKenzie said anyone approached in these circumstances should “kindly refuse the work”. “If these people are persistent, do not engage with them but instead call 000, Crime Stoppers 1800 333 000 or Consumer Affairs Victoria 1300 558 181,” he said.

Fantastic Prices on Australian Made Fabrics *Conditions Apply Selected fabrics and finishes only. All pictures for illustration purposes only. See in store for full details. All quotes expire 22nd December 2017.

Going orange for a cause THE McCrae lighthouse will glow orange again this year to mark the third anniversary of the state government’s Victoria Against Violence campaign. It is part of the 16 Days of Activism which began on the International Day for the Elimination of Violence against Women, Saturday 25 November and ends on International Human Rights Day, Sunday 10 December. The idea is to focus community attention onto

the devastating impact caused by family violence. Organiser Jeanette Lane said violence affected too many families, and that we all have a role to play in preventing violence in our community. She is seeking public support for the campaign by backing the themes: #putyourhandup #goorange and #freefromviolence “Everyone can play a role in preventing family violence to help make Victoria a safe and equal society,” Ms Lane said. Southern Peninsula News 5 December 2017