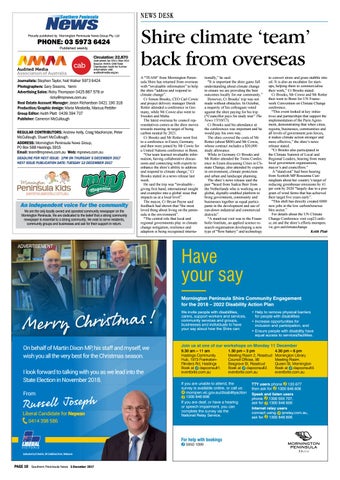 Shire climate ‘team’ back from overseas A “TEAM” from Mornington Peninsula Shire has returned from overseas with “invaluable information” to help the shire “address and respond to climate change”. Cr Simon Brooks, CEO Carl Cowie and project delivery manager Derek Rotter attended a conference in Germany, while Mr Cowie also went to Sweden and Malta. The latest overseas by council representatives comes as the shire moves towards meeting its target of being carbon neutral by 2021. Cr Brooks and Mr Rotter went first to a conference in Essen, Germany and then were joined by Mr Cowie for a United Nations conference in Bonn. “Our team learned invaluable information, having collaborative discussions and connecting with experts to enhance the shire’s ability to address and respond to climate change,” Cr Brooks stated in a news release last week. He said the trip was “invaluable giving first hand, international insight and examples into a global issue that impacts us at a local level”. The mayor, Cr Bryan Payne said feedback had shown that “the most loved thing about living on the peninsula is the environment”. “The central role that local and regional governments play in climate change mitigation, resilience and adaption is being recognised interna-

! as m t is r Ch y Merr On behalf of Martin Dixon MP, his staff and myself, we wish you all the very best for the Christmas season. I look forward to talking with you as we lead into the State Election in November 2018. From

tionally,” he said. “It is important the shire gains full understanding about climate change to ensure we are providing the best outcomes locally for our community.” However, Cr Brooks’ trip was not made without obstacles. In October, a majority of his colleagues voted against the shire paying for his trip (“Councillor pays for study tour” The News 17/10/17). Cr Brooks said his attendance at the conferences was important and he would pay his own way. The shire covered the costs of Mr Rotter (about $800) and Mr Cowie, whose contract includes a $30,000 study allowance. While in Germany Cr Brooks and Mr Rotter attended the Twins Conference in Essen discussing Cities in Climate Change, also attended by experts in environment, climate protection and urban and landscape planning. The shire’s news release said the pair “heard from Saskia Beer from the Netherlands who is working on a global, digitally-enabled platform to bring government, community and businesses together as equal participants in the development and use of run-down industrial and commercial districts”. “A stand-out visit was to the Fraunhofer Institute, an applied science research organisation developing a new type of “flow battery” and technology

Have your say Mornington Peninsula Shire Community Engagement for the 2018 – 2022 Disability Action Plan We invite people with disabilities, carers, support workers and services, community services and groups, businesses and individuals to have your say about how the Shire can:

If you are unable to attend, the survey is available online, or call us: mornpen.vic.gov.au/disabilityaction 1300 846 606 If you are deaf, or have a hearing or speech impairment, you can complete the survey via the National Relay Service.

Join us at one of our workshops on Monday 11 December

to convert straw and grass stubble into oil. It is also an incubator for startups, helping them to commercialise their work,” Cr Brooks stated. Cr Brooks, Mr Cowie and Mr Rotter then went to Bonn for UN Framework Convention on Climate Change conference. “This event looked at key initiatives and partnerships that support the implementation of the Paris Agreement, demonstrating that when cities, regions, businesses, communities and all levels of government join forces, it makes climate action stronger and more effective,” the shire’s news release stated. “Cr Brooks also participated in the Climate Summit of Local and Regional Leaders, hearing from many local government organisations, mayor’s and councillors.” A “stand-out” had been hearing from Scottish MP Roseanna Cunningham about her country’s target of reducing greenhouse emissions by 41 per cent by 2020 “largely due to a program of wind farms that has achieved their target five years early”. “This shift has directly created 6000 new jobs in the low carbon/renewables sector.” For details about the UN Climate Change Conference visit cop23.unfccc.int and the shire’s efforts mornpen. vic.gov.au/climatechange Keith Platt