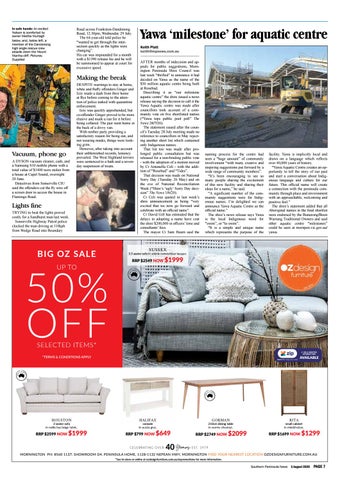 Road across Frankston-Dandenong Road, 12.30pm, Wednesday 29 July. The 64-year-old told police he “wanted to get through the intersection quickly as the lights were changing”. His car was impounded for a month with a $1390 release fee and he will be summonsed to appear at court for excessive speed.

In safe hands: An excited Nelson is comforted by owner Medha Murtagh below, and, below left, a member of the Dandenong high angle rescue crew abseils down the Mount Martha cliff. Pictures: Supplied

Vacuum, phone go A DYSON vacuum cleaner, cash, and a Samsung S10 mobile phone with a total value of $1400 were stolen from a house at Capel Sound, overnight 20 June. Detectives from Somerville CIU said the offenders cut the fly wire off a screen door to access the house in Flamingo Road.

DESPITE warnings to stay at home, white and fluffy offenders Ginger and Izzy made a dash from their home at Rye before coming to the attention of police tasked with quarantine enforcement. Izzy was quickly apprehended, but co-offender Ginger proved to be more elusive and made a run for it before being collared. The pair went home in the back of a divvy van. With neither party providing a satisfactory reason for being out, and not wearing masks, things were looking grim. However, after taking into account their unblemished records, leniency prevailed. The West Highland terriers were sentenced to a bath and a sevenday suspension of treats.

Yawa ‘milestone’ for aquatic centre Keith Platt keith@mpnews.com.au AFTER months of indecision and appeals for public suggestions, Mornington Peninsula Shire Council was last week “thrilled” to announce it had decided on Yawa as the name of the $50 million aquatic centre being built at Rosebud. Describing it as “our milestone aquatic centre” the shire issued a news release saying the decision to call it the Yawa Aquatic centre was made after councillors took account of a community vote on five shortlisted names (“Yawa tops public pool poll” The News 28/7/20). The statement issued after the council’s Tuesday 28 July meeting made no reference to councillors in May rejecting another short list which contained only Indigenous names. That list too was made after prolonged public consultation but was released for a non-binding public vote - with the adoption of a motion moved by Cr Antonella Celi - with the addition of “Rosebud” and “Tides”. That decision was made on National Sorry Day (Tuesday 26 May) and on the eve of National Reconciliation Week (“Shire’s ‘ugly’ Sorry Day decision” The News 1/6/20). Cr Celi was quoted in last week’s shire announcement as being “very excited that we now go forward and celebrate with an official name”. Cr David Gill has estimated that the delays in adopting a name have cost the shire $200,000 in officers’ time and consultants’ fees. The mayor Cr Sam Hearn said the

naming process for the centre had seen a “huge amount” of community involvement “with many creative and inspiring suggestions put forward by a wide range of community members”. “It’s been encouraging to see so many people sharing the excitement of this new facility and sharing their ideas for a name,” he said. “A significant number of the community suggestions were for Indigenous names. I’m delighted we can announce Yawa Aquatic Centre as the official name.” The shire’s news release says Yawa is the local Indigenous word for “swim”, or “to swim”. “It is a simple and unique name which represents the purpose of the

facility. Yawa is implicitly local and draws on a language which reflects over 40,000 years of history. “Yawa Aquatic Centre creates an opportunity to tell the story of our past and start a conversation about Indigenous language and culture for our future. This official name will create a connection with the peninsula community through place and environment with an approachable, welcoming and positive feel.” The shire’s statement added that all Aboriginal names in the final shortlist were endorsed by the Bunurong/Boon Wurrung Traditional Owners and said other aquatic centre “milestones” could be seen at mornpen.vic.gov.au/ yawa.