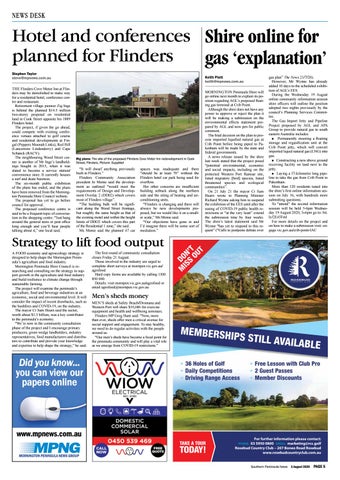 Hotel and conferences Shire online for planned for Flinders gas ‘explanation’ Stephen Taylor steve@mpnews.com.au THE Flinders Cove Motor Inn at Flinders may be demolished to make way for a residential hotel, conference centre and restaurant. Retirement village pioneer Zig Inge is behind the planned $14.5 million two-storey proposal on residential land in Cook Street opposite his 1889 Flinders hotel. The project, if given the go ahead, could compete with existing conference venues attached to golf course and residential developments at Fingal (Peppers Moonah Links), Red Hill (Lancemore Lindenderry) and Cape Schanck (RACV). The neighbouring Wood Street corner is another of Mr Inge’s landholdings bought in 2015, when it was slated to become a service station/ convenience store. It currently houses a surf and skate business. The six-month public exhibition of the plans has ended, and the plans have been removed from the Mornington Peninsula Shire Council website. The proposal has yet to go before council for approval. The proposed conference centre is said to be a frequent topic of conversation in the shopping centre. “Just hang around the general store or post office long enough and you’ll hear people talking about it,” one local said.

“It will dwarf anything previously built in Flinders.” Flinders Community Association president Jo Monie said the development as outlined “would meet the requirements of Design and Development Overlay 2 (DD02) which covers most of Flinders village”. “The building bulk will be significant along the Wood Street frontage, but roughly the same height as that of the existing motel and within the height limits of DDO2 which covers this part of the Residential 1 zone,” she said. Ms Monie said the planned 47 car

spaces was inadequate and there “should be at least 70” without the Flinders hotel car park being used for overflow. Her other concerns are insufficient building setback along the northern side and the siting of heating and airconditioning units. “Flinders is changing and there will always be new developments proposed, but we would like it on a smaller scale,” Ms Monie said. “Our objections have gone in and I’d imagine there will be some sort of mediation.”

MORNINGTON Peninsula Shire will go online next month to explain its position regarding AGL’s proposed floating gas terminal at Crib Point. Although the shire does not have any power to approve or reject the plan it will be making a submission on the environmental effects statement prepared by AGL and now pen for public comment. The final decision on the plan to process imported liquified natural gas at Crib Point before being piped to Pakenham will be made by the state and federal governments. A news release issued by the shire last week stated that the project posed “potential environmental, economic and social impacts, including on the protected Western Port Ramsar site, listed migratory [bird] species, listed threatened species and ecological communities”. On 21 July 21 the mayor Cr Sam Hearn wrote to Planning Minister Richard Wynne asking him to suspend the exhibition of the EES until after the easing of COVID-19 public health restrictions or “at the very least” extend the submission time by four weeks. The shire’s latest statement said Mr Wynne “has yet to respond to this request” (“Calls to postpone debate over

gas plan” The News 21/7/20). However, Mr Wynne has already added 10 days to the scheduled exhibition of AGL’s EES. During the Wednesday 19 August online community information session shire officers will outline the position adopted two nights previously by the council’s Planning Services Committee. The Gas Import Jetty and Pipeline Project proposed by AGL and APA Group to provide natural gas to south eastern Australia includes: n Permanently mooring a floating storage and regasification unit at the Crib Point jetty, which will convert imported liquid natural gas (LNG) into gas. n Constructing a new above ground receiving facility on land next to the jetty. n Laying a 57-kilometre long pipeline to take the gas from Crib Point to Pakenham. More than 120 residents tuned into the shire’s first online information session on July 16, with hundreds more submitting questions. To “attend” the second information session will be held 5-6pm Wednesday 19 August 2020, 5–6pm go to: bit. ly/2E45Fml For more details on the project and on how to make a submission visit: engage.vic.gov.au/crib-point-IAC

Strategy to lift food output A FOOD economy and agroecology strategy is designed to help shape the Mornington Peninsula’s agriculture and food industry. Mornington Peninsula Shire Council is researching and consulting on the strategy to support growth in the agriculture and food industry and build resilience to climate change through sustainable farming. The project will examine the peninsula’s agriculture, food and beverage industries at an economic, social and environmental level. It will consider the impact of recent drawbacks, such as the bushfires and COVID-19, on the industry. The mayor Cr Sam Hearn said the sector, worth about $1.3 billion, was a key contributor to the peninsula’s economy. “We’re now in the community consultation phase of the project and I encourage primary producers, green wedge landholders, industry representatives, food manufacturers and distributors to contribute and provide your knowledge and expertise to help shape the strategy,” he said.

Men’s sheds money MEN’S sheds at Safety Beach/Dromana and Western Port will share $10,686 for exercise equipment and health and wellbeing seminars. Flinders MP Greg Hunt said: “Now, more than ever, sheds offer men a critical avenue for social support and engagement. To stay healthy, we need to do regular activities with the people around us. “Our men’s sheds have become a focal point for the peninsula community and will play a vital role as we emerge from COVID-19 restrictions.”