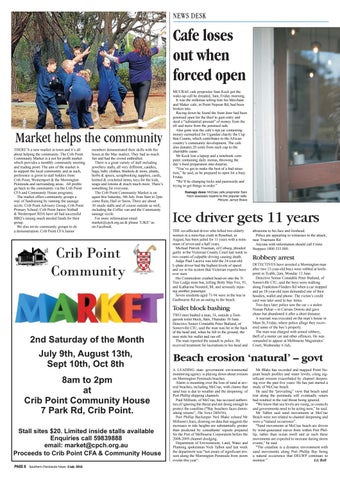 Cafe loses out when forced open

Market helps the community THERE’S a new market in town and it’s all about helping the community. The Crib Point &RPPXQLW\0DUNHWLVDQRWIRUSUR¿WPDUNHW which provides a monthly community meeting and trading point. The aim of the market is to support the local community and as such, preference is given to stall holders from Crib Point, Westernport & the Mornington 3HQLQVXODDQGVXUURXQGLQJDUHDV$OOSUR¿WV go back to the community via the Crib Point CFA and Community House programs. The market offers community groups a way of fundraising by running the sausage sizzle. Crib Point Advisory Group, Crib Point Primary School, Crib Point Junior Netball & Westernport RDA have all had successful BBQ’s raising much needed funds for their group. We also invite community groups to do a demonstration. Crib Point CFA Junior

PHPEHUVGHPRQVWUDWHGWKHLUVNLOOVZLWK¿UH hoses at the May market. They had so much fun and had the crowd enthralled. There is a great variety of stall including jewellery stalls, all very different, candles, bags, baby clothes, blankets & more, plants, herbs & spices, scrapbooking supplies, cards, knitted & crocheted items, toys for the kids, soaps and lotions & much much more. There’s something for everyone. The Crib Point Community Market is on again this Saturday, 9th July from 8am to 2pm come Rain, Hail or Snow. There are about 30 inside stalls and of course outside as well, including the Coffee van and the Community sausage sizzle. For more information email market@cpch.org.au & please ‘LIKE’ us on Facebook.

MCCRAE cafe proprietor Sam Keck got the wake-up call he dreaded, 3am, Friday morning. It was the milkman telling him his Merchant and Maker cafe, in Point Nepean Rd, had been broken into. Racing down he found the front door had been jemmied open for the thief to gain entry and steal a “substantial amount” of money from the till and more from the jemmied safe. Also gone was the cafe’s tips jar containing money earmarked for Ugandan charity the Cup that Counts, which contributes to the African country’s community development. The cafe also donates 20 cents from each cup to the charitable cause. Mr Keck lost a laptop and a notebook computer containing daily menus, throwing the day’s food preparation into disarray. “You’ve got to make the best of a bad situation,” he said, as he prepared to open for a busy Friday. “We’ll be changing locks and passwords and trying to get things in order.” Damage done: McCrae cafe proprietor Sam Keck assesses repairs to the popular cafe. Picture: Jarryd Bravo

Ice driver gets 11 years THE ice-affected driver who killed two elderly women in a mini-bus crash in Rosebud, in August, has been jailed for 11 years with a minimum of seven and a half years. Michael Patrick Trueman, of Coburg, pleaded guilty in the Victorian County Court last week to two counts of culpable driving causing death. Judge Paul Lacava was told the 24-year-old L-plate driver had the highest levels of speed and ice in his system that Victorian experts have ever seen. His Commodore crashed head-on into the Ti Tree Lodge mini bus, killing Betty May Fox, 91, and Katharina Nensteil, 88, and seriously injuring another passenger. Seven residents aged 71-94 were in the bus in Eastbourne Rd on an outing to the beach.

TWO men bashed a man, 54, outside a Tootgarook toilet block, 8am, Thursday 30 June. Detective Senior Constable Peter Butland, of Somerville CIU, said the man was hit in the back of the head and, when he fell to the ground, the men stole his wallet and ran off. The man reported the assault to police. He received treatment for lacerations to his head and

abrasions to his face and forehead. Police are appealing to witnesses to the attack, near Truemans Rd. Anyone with information should call Crime Stoppers 1800 333 000.

Robbery arrest DETECTIVES have arrested a Mornington man after two 15-year-old boys were robbed at knifepoint in Tyabb, 2am, Monday 13 June. Detective Senior Constable Peter Butland, of Somerville CIU, said the boys were walking along Frankston-Flinders Rd when a car stopped and an 18-year-old man demanded one of their hoodies, wallet and phone. The victim’s credit card was later used to buy items. Two days later police saw the car – a stolen Nissan Pulsar – in Carrum Downs and gave chase but abandoned it after a short distance. A warrant was executed on the man’s house in Main St, Friday, where police allege they recovered some of the boy’s property. The man was charged with armed robbery, theft of a motor car and other offences. He was remanded to appear at Melbourne Magistrates’ Court, Wednesday 6 July.

Beach erosion ‘natural’ – govt A LEADING state government environmental monitoring agency is playing down about erosion on Mornington Peninsula beaches. Alarm is mounting over the loss of sand at several beaches, including McCrae, with claims that sand loss is due to weather and the deepening of Port Phillip shipping channels. Paul Millsom, of McCrae, has accused authorities of ignoring the threat and not doing enough to protect the coastline (“Bay beachers faces diminishing returns”, The News 28/6/16). Port Phillip Baykeeper Neil Blake echoed Mr Millsom's fears, drawing on data that suggests the increases in tide heights are substantially greater than predicted by consultants' reports prepared for the Port of Melbourne Corporation before the 2008-2009 channel dredging. Department of Environment, Land, Water and Planning spokesman Nick Talbot said last week the department was “not aware of significant erosion along the Mornington Peninsula from storm events this year”.

Mr Blake has recorded and mapped Point Nepean beach profiles and water levels, citing significant erosion exacerbated by channel deepening over the past five years. He has just started a study of McCrae beach. He said the “prevailing” view that beach sand lost along the peninsula will eventually return had resulted in the real threat being ignored. “We know that sea levels are rising, so councils and governments need to be acting now,” he said. Mr Talbot said sand movements at McCrae Beach were not related to channel deepening and were a “natural occurrence”. “Sand movements at McCrae beach are driven by wind-generated waves from within Port Phillip, rather than ocean swell and as such these movements are expected to increase during storm events,” he said. “The coastline is a dynamic environment with sand movements along Port Phillip Bay being a natural occurrence that DELWP continues to monitor.” Liz Bell