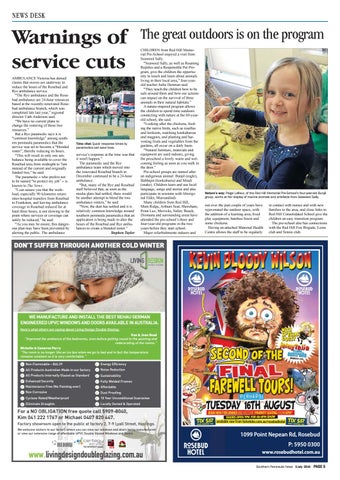 Warnings of service cuts AMBULANCE Victoria has denied claims that moves are underway to reduce the hours of the Rosebud and Rye ambulance service. “The Rye ambulance and the Rosebud ambulance are 24-hour resources based at the recently-renovated Rosebud ambulance branch, which was completed late last year,” regional director Cath Anderson said. “We have no current plans to change the rostering of these two resources.” But a Rye paramedic says it is “common knowledge” among southern peninsula paramedics that the service was set to become a “blended roster”, thereby reducing its hours. “This will result in only one ambulance being available to cover the Rosebud area from midnight to 7am instead of the current and originally funded two,” he said. The paramedic – who prefers not to be named “to protect my job” – is known to The News. “I can assure you that the workload, especially 90 kilometre return inter-hospital transfers from Rosebud to Frankston, and leaving ambulance coverage in Rosebud reduced for at least three hours, is not slowing to the point where services or coverage can safely be reduced,” he said. “As you may be aware, this dangerous plan may have been prevented by alerting the public. The ambulance

Time vital: Quick response times by paramedics can save lives.

service’s response at the time was that it won't happen.” The paramedic said the Rye ambulance team which moved into the renovated Rosebud branch in December continued to be a 24-hour ambulance. “But, many of the Rye and Rosebud staff believed that, as soon as the media glare had settled, there would be another attempt to blend the two ambulance rosters,” he said. “Now, the dust has settled and it is relatively common knowledge around southern peninsula paramedics that an application is being made to alter the hours of the Rosebud and Rye ambulances to create a blended roster.” Stephen Taylor

The great outdoors is on the program CHILDREN from Red Hill Memorial Pre-School enjoyed a visit from Seaweed Sally. “Seaweed Sally, as well as Roaming Reptiles and a Responsible Pet Program, give the children the opportunity to touch and learn about animals living in their local area,” four-yearold teacher Jodie Denman said. “They teach the children how to be safe around them and how our actions can impact on the survival of these animals in their natural habitats.” A nature-inspired program allows the children to spend time outdoors connecting with nature at the 60-yearold school, she said. “Looking after the chickens, feeding the native birds, such as rosellas and lorikeets, watching kookaburras and magpies, and planting and harvesting fruits and vegetables from the gardens, all occur on a daily basis. “Natural furniture, materials and equipment are used indoors, giving the preschool a lovely warm and welcoming feeling as soon as you walk in the door.” Pre-school groups are named after an indigenous animal: Bunjil (eagle), Babbajin (kookaburra) and Mindi (snake). Children learn and use local language, songs and stories and also participate in sessions with Aboriginal Elder, Murrundindi. Many children from Red Hill, Main Ridge, Arthurs Seat, Shoreham, Point Leo, Merricks, Safety Beach, Dromana and surrounding areas have attended the pre-school’s three and four-year-old programs in the two years before they start school. Major refurbishments indoors and

out over the past couple of years have rejuvenated the outdoor space, with the addition of a learning area, fixed play equipment, bamboo forest and some chickens. Having an attached Maternal Health Centre allows the staff to be regularly

in contact with nurses and with new families to the area, and close links to Red Hill Consolidated School give the children an easy transition program. The pre-school also has connections with the Red Hill Fire Brigade, Lions club and Tennis club.

For a NO OBLIGATION IUHHTXRWHFDOOé8040, Kim 041 222 1767 or Michael 0407 820 447. Factory showroom open to the public at factory 2, 7-9 Lyall Street, Hastings. We welcome visitors to our factory where you can view our windows and doors being manufactured or view our extensive range of affordable UPVC Double Glazed Windows and Doors.