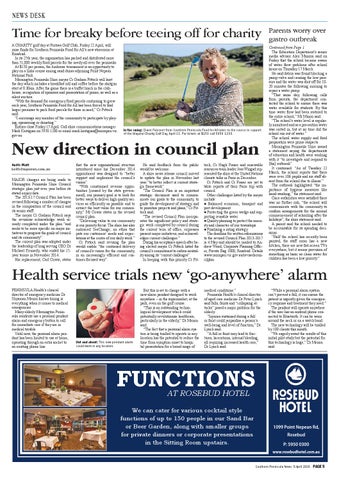 Time for breaky before teeing off for charity A CHARITY golf day at Portsea Golf Club, Friday 22 April, will raise funds for Southern Peninsula Food for All’s new storeroom at Rosebud. In its 25th year, the organisation has packed and distributed more than 51,000 weekly food parcels for the needy all over the peninsula. At $150 per person, the Ambrose tournament is an opportunity to play on a links course among sand dunes adjoining Point Nepean National Park. Mornington Peninsula Shire mayor Cr Graham Pittock will host the day which includes a breakfast roll and coffee before the shotgun start at 8.30am. After the game there is a buffet lunch in the clubhouse, recognition of sponsors and presentation of prizes, as well as a silent auction. “With the demand for emergency food parcels continuing to grow each year, Southern Peninsula Food for All has been forced to find larger premises to pack food parcels for those in need,” Cr Pittock said. “I encourage any member of the community to participate by playing, sponsoring or donating.” Entries close Friday 15 April. Call shire communications manager Mark Kestigian on 5950 1200 or email mark.kestigian@mornpen.vic. gov.au

In the swing: Diane Falconer from Southern Peninsula Food for All takes to the course in support of the Mayoral Charity Golf Day, April 22. For tickets at $150 call 5950 1200.

New direction in council plan Keith Platt keith@mpnews.com.au MAJOR changes are being made to Mornington Peninsula Shire Council strategic plan just over year before its stated expiry date. The 2013-17 Council Plan has been revised following a number of changes in the composition of the council and its senior staff. The mayor Cr Graham Pittock says the revisions acknowledge work already completed under the plan “and seeks to be more specific on major initiatives to progress the goals of council and its community”. The current plan was adopted under the leadership of long serving CEO Dr Michael Kennedy, who ended his 15year tenure in November 2014. His replacement, Carl Cowie, states

that the new organisational structure introduced since his December 2014 appointment was designed to “better support and implement the council’s vision”. “With constrained revenue opportunities [caused by the state government], our primary goal is to look for better ways to deliver high quality services as efficiently as possible and to extract the best value for our community,” Mr Cowie states in the revised council plan. “Delivering value to our community is our priority focus. The shire has also embraced SeeChange; an ethos that puts our customers’ needs and expectations at the centre of our daily work.” Cr Pittock said revising the plan would enable “the continued delivery of council's vision for the community, in an increasingly efficient and customer-focused way”.

He said feedback from the public would be welcome. A shire news release council moved to update the plan in November last year “to better reflect is current strategic framework”. "The Council Plan is an important strategic document used to communicate our goals to the community, to guide the development of strategy, and to prioritise projects and plans,” Cr Pittock said. "The revised Council Plan incorporates the significant policy and strategic work completed by council during the current term of office, expresses present major initiatives, and acknowledges current challenges.” During his acceptance speech after being elected mayor Cr Pittock listed the council’s commitment to carbon neutrality among its “current challenges”. In keeping with this priority Cr Pit-

tock, Cr Hugh Fraser and renewable resources team leader Jess Wingad represented the shire at the United Nations climate talks in Paris in December. Cr Pittock and Cr Fraser are yet to table reports of their Paris trip with council. Other challenges listed by the mayor include:  Balanced economic, transport and port development.  Protecting the green wedge and supporting reusable water.  Quality planning to protect the amenity and character of our townships.  Finalising a rating strategy. The deadline for written submissions to the revised Council Plan 2013-2017 is 4 May and should be mailed to Andrew Wood, Corporate Planning Officer, Private Bag 1000, Rosebud. Details www.mornpen.vic.gov.au/revisedcouncilplan

Parents worry over gastro outbreak Continued from Page 1 The Education Department’s senior media advisor Alex Munron said on Friday that the school became aware of water flow problems after school hours on Thursday 17 March. He said debris was found blocking a pump valve and causing the low pressure and the water was shut off for 1020 minutes the following morning to repair a water pump. “That same day, following calls from parents, the department contacted the school to ensure there was water available for students. By this time water flow had been restored to the entire school,” Mr Munro said. “The school’s water level is regularly monitored and as a precaution water was carted in, but at no time did the school run out of water.” The school water supply and food preparation were prime suspects. Mornington Peninsula Shire issued a statement saying the departments of education and health were working with it “to investigate and respond to [the] outbreak”. It continued: “As of Tuesday 22 March, the school reports that there were over 106 pupils and six staff absent from the school due to illness.” The outbreak highlighted “the importance of hygiene measures like hand-washing,” the statement said. Once authorities were satisfied there was no further risk, “the school will communicate with the community to confirm arrangements for the normal commencement of schooling after the holidays”, the shire statement said. A parent said the school needed to be accountable for its spending decisions. “Half the school has recently been painted, the staff room has a new kitchen, there are new flat-screen TVs everywhere, but it seems provision of something as basic as clean water for children has been a low priority.”

Health service trials new ‘go-anywhere’ alarm PENINSULA Health’s clinical director of emergency medicine Dr Shyaman Menon knows timing is everything when it comes to medical emergencies. Many elderly Mornington Peninsula residents use a personal pendant alarm and emergency button to call for immediate care if they are in medical trouble. Until now, the personal alarm pendant has been limited to use at home, operating through an extra socket to an existing phone line.

Out and about: This new pendant alarm could work in any location.

But this is set to change with a new alarm pendant designed to work anywhere – in the supermarket, at the park, even on the golf course. “This is an outstanding technological development which could potentially revolutionise healthcare, particularly in the elderly,” Dr Menon said. “The fact that a personal alarm system is being trialled to operate in any location has the potential to reduce the time from symptom onset to hospital presentation for a broad range of

“While a personal alarm system can’t prevent a fall, it can ensure the patient is urgently given the emergency response and treatment they need.” The pendant will operate anywhere if the user has an android phone connected to Bluetooth. It can be worn around the neck or on a watch band. The new technology will be trialled by 100 clients this month. “We eagerly await the results of this initial pilot study but the potential for this technology is huge,” Dr Menon said.

We can cater for various cocktail style functions of up to 150 people in our Sand Bar or Beer Garden, along with smaller groups for private dinners or corporate presentations in the Sitting Room upstairs.