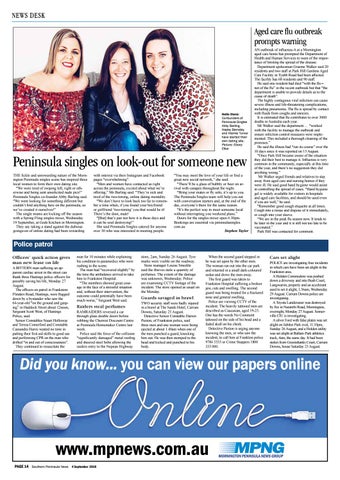 Peninsula singles on look-out for someone new THE fickle and unrewarding nature of the Mornington Peninsula singles scene has inspired three local women to form their own dating site. “We were tired of swiping left, right or otherwise and being sent unsolicited nude pics!” Peninsula Singles co-founder Abby Barling said. “We went looking for something different but couldn’t find anything here on the peninsula, so we’ve created it ourselves!” The single mums are kicking off the season with a Spring Fling singles mixer, Wednesday 19 September, at Gods Kitchen in Mornington. They say taking a stand against the dubious goings-on of online dating had been rewarding

with interest via their Instagram and Facebook pages “overwhelming”. “Men and women have contacted us right across the peninsula, excited about what we’re offering,” Ms Barling said. “They’re sick and tired of the two-timing, online dating mentality. “We don’t have to look back too far to remember a time when, if you found your boyfriend or girlfriend ‘two-timing’ you that would be it! There’s the door, mate! “[But] that’s just not how it is these days and it can be soul destroying!” She said Peninsula Singles catered for anyone over 30 who was interested in meeting people.

“You may meet the love of your life or find a great new social network,” she said. “There’ll be a glass of bubbly or beer on arrival with canapes throughout the night. “Bring your mates or fly solo, it’s up to you. The Peninsula Singles team will help you out with conversation starters and, at the end of the day, everyone’s there for the same reason. “It’s the perfect way to meet someone local without interrupting you weekend plans.” Doors for the singles mixer open 6.30pm. Bookings are essential via peninsulasingles. com.au Stephen Taylor

AN outbreak of influenza-A at a Mornington aged care home has prompted the Department of Health and Human Services to warn of the importance of limiting the spread of the disease. Department spokesman Graeme Walker said 20 residents and two staff at Park Hill Gardens Aged Care Facility in Tyabb Road had been affected. The facility has 68 residents and 90 staff. He said one resident had died “with the flu – not of the flu” in the recent outbreak but that “the department is unable to provide details as to the cause of death”. The highly contagious viral infection can cause severe illness and life-threatening complications, including pneumonia. The flu is spread by contact with fluids from coughs and sneezes. It is estimated that flu contributes to over 3000 deaths in Australia each year. Mr Walker said the department … “worked with the facility to manage the outbreak and ensure infection control measures were implemented. This included a thorough cleaning of the premises.” He said the illness had “run its course” over the 10 days since it was reported on 13 August. “Once Park Hill became aware of the situation they did their best to manage it. Influenza is very common in the community, especially at this time of the year, and there’s no suggestion they did anything wrong.” Mr Walker urged friends and relatives to stay away from aged care and nursing homes if they were ill. He said good hand hygiene would assist in controlling the spread of cases. “Hand hygiene gel is widely available for visitors in hospitals and aged care facilities, and should be used even if you are well,” he said. “Remember good cough etiquette at all times. Cough into a tissue and dispose of it immediately, or cough into your sleeve. “We are in the peak flu season now. It tends to be later in the year and it is still not too late to be vaccinated.” Park Hill was contacted for comment.

Police patrol Officers’ quick action gives man new lease on life A BITTERN man suffering an apparent cardiac arrest in the street can thank three Hastings police officers for possibly saving his life, Monday 27 August. The officers on patrol in FrankstonFlinders Road, Hastings, were flagged down by a bystander who saw the 64-year-old “on the ground and gasping” in Haddock Street about 12noon, Sergeant Scott West, of Hastings Police, said. Senior Constables Stuart Holloway and Teresa Comerford and Constable Cassundra Harris wasted no time in putting their first aid skills to good use and performing CPR on the man who drifted “in and out of consciousness”. They continued to resuscitate the

man for 10 minutes while explaining his condition to paramedics who were rushing to the scene. The man had “recovered slightly” by the time the ambulance arrived to take him to Frankston Hospital. “The members showed great courage in the face of a stressful situation and, without their intervention, the outcome could potentially have been much worse,” Sergeant West said.

store, 2am, Sunday 26 August. Tyre marks were visible on the roadway. Store manager Louise Smedile said the thieves stole a quantity of perfumes. The extent of the damage was unknown, Wednesday. Police are examining CCTV footage of the incident. The store opened as usual on the Monday.

Guards savaged in brawl TWO security staff were badly injured in a brawl at The Sands Hotel, Carrum Downs, Saturday 25 August. Detective Senior Constable Darren Paxton, of Frankston police, said three men and one woman were being ejected at about 1.40am when one of the men punched a guard, knocking him out. He was then stomped to the head and kicked and punched to his body.

When the second guard stepped in he was set upon by the other men. The woman ran out into the car park and returned in a small dark-coloured sedan and drove the men away. The first guard was taken to Frankston Hospital suffering a broken jaw, cuts and swelling. The second guard was being treated for a fractured nose and general swelling. Police are viewing CCTV of the incident. The heavily tattooed men are described as Caucasian, aged 19-25. One has the words No Comment tattooed on the side of his head and a faded skull on his cheek. Detective Paxton is urging anyone knowing the men, or who saw the incident, to call him at Frankton police 9784 5555 or Crime Stoppers 1800 333 000.

Cars set alight POLICE are investigating four incidents in which cars have been set alight in the Frankston area. A Holden Commodore was pushed down a driveway and into Bush Court, Langwarrin, property and an accelerant used to set it alight, 1.56am, Wednesday 29 August. Carrum Downs police are investigating. A Toyota Landcruiser was destroyed by fire in Narambi Road, Mornington, overnight, Monday 27 August. Somerville CIU is investigating. A silver Ford with false plates was set alight on Jubilee Park oval, 11.10pm, Sunday 26 August, and a Holden utility was set alight at Ballam Park athletics track, 4am, the same day. It had been stolen from Greenshanks Court, Carrum Downs, house Saturday 25 August.