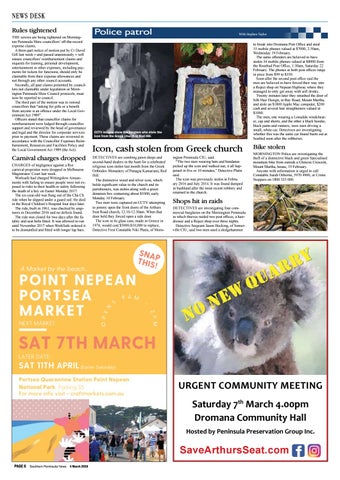 NEWS DESK Rules tightened THE screws are being tightened on Mornington Peninsula Shire councillors’ off-the-record expense claims. A three-part notice of motion put by Cr David Gill last week – and passed unanimously – will ensure councillors’ reimbursement claims and requests for training, personal development, entertainment or other expenses, including payments for tickets for functions, should only be claimable from their expense allowances and not through any other council accounts. Secondly, all past claims presented by councillors not claimable under legislation or Mornington Peninsula Shire Council protocols, must now be reported to council. The third part of the motion was to remind councillors that “asking for gifts or a benefit from anyone is an offence under the Local Government Act 1989”. Officers stated that councillor claims for reimbursement were lodged through councillor support and reviewed by the head of governance and legal and the director for corporate services prior to payment. These claims are reviewed in accordance with the Councillor Expenses Reimbursement, Resources and Facilities Policy and the Local Government Act 1989 (the Act).

Carnival charges dropped CHARGES of negligence against a Rye carnival proprietor were dropped in Melbourne Magistrates’ Court last week. Worksafe had charged Wittingslow Amusements with failing to ensure people were not exposed to risks to their health or safety following the death of a boy on Easter Monday 2017. The six-year-old was flung out of the Cha Ch ride when he slipped under a guard rail. He died in the Royal Children’s Hospital four days later. The ride, built in 1961, was checked by engineers in December 2016 and no defects found. The ride was closed for two days after the fatality and seat belts fitted. It was allowed to run until November 2017 when WorkSafe ordered it to be dismantled and fitted with longer lap bars.

to break into Dromana Post Office and steal 15 mobile phones valued at $7000, 2.50am, Wednesday 19 February. The same offenders are believed to have stolen 34 mobile phones valued at $8000 from the Rosebud Post Office, 1.30am, Saturday 22 February. The phones at both post offices range in price from $99 to $350. Soon after the second post office raid the men are believed to have forced their way into a Reject shop on Nepean Highway where they managed to only get away with soft drinks. Twenty minutes later they smashed the door of Silk Hair Design, in Bay Road, Mount Martha, and stole an $1800 Apple Mac computer, $200 cash and several hair straighteners valued at $1000. The men, one wearing a Lonsdale windcheater, cap and shorts, and the other a black hoodie, black pants and runners, were seen driving a small, white car. Detectives are investigating whether this was the same car found burnt out at Seaford soon after the robberies.

CCTV images show the burglars who stole the icon from the Greek church in Red Hill.

Icon, cash stolen from Greek church DETECTIVES are combing pawn shops and second-hand dealers in the hunt for a celebrated religious icon stolen last month from the Greek Orthodox Monastery of Panagia Kamariani, Red Hill. The distinctive wood and silver icon, which holds significant value to the church and its parishioners, was stolen along with a green donation box containing about $1000, early Monday 10 February. Two men were captured on CCTV attempting to jemmy open the front doors of the Arthurs Seat Road church, 12.10-12.30am. When that door held they forced open a side door. The icon in its glass case, made in Greece in 1974, would cost $5000-$10,000 to replace, Detective First Constable Niki Platis, of Morn-

ington Peninsula CIU, said. “The two men wearing hats and bandanas picked up the icon and walked out; it all happened in five or 10 minutes,” Detective Platis said. The icon was previously stolen in February 2016 and July 2014. It was found dumped in bushland after the most recent robbery and returned to the church.

Bike stolen MORNINGTON Police are investigating the theft of a distinctive black and green Specialised mountain bike from outside a Glencoe Crescent, Mount Martha, house, 19 February. Anyone with information is urged to call Constable Sarah Osborne, 5970 4900, or Crime Stoppers on 1800 333 000.