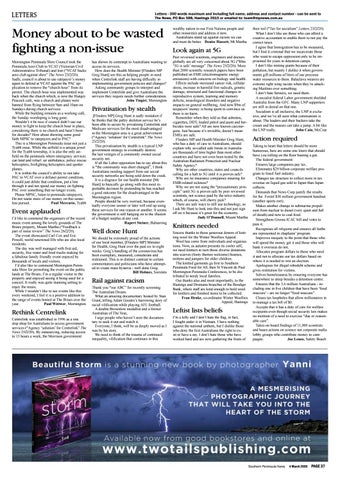 Money about to be wasted fighting a non-issue Mornington Peninsula Shire Council took the Peninsula Aero Club to VCAT (Victorian Civil Administrative Tribunal) and lost (“VCAT backs aero club against shire” The News 25/2/20). Sadly, council is about to use ratepayer’s money again to defend at VCAT against the PAC application to remove the “church hour” from its permit. The church hour was implemented way back when the church which, is now the Hungry Peacock cafe, was a church and planes were banned from flying between 9am and 10am on Sundays during church services. While the building remains as a working café, the Sunday worshiping is long gone. Wouldn’t it be nice if council didn’t use our money to fight to keep the church hour in place, considering there is no church and hasn’t been for decades? How about showing some good faith MPSC to ratepayers and to PAC? This is a Mornington Peninsula issue not just a Tyabb issue. While the airfield is a unique jewel for the Tyabb township, it is also the only airfield on the peninsula where emergency services can land and refuel: air ambulance, police rescue helicopters, firefighting helicopters and spotter planes. It is within the council’s ability to not take PAC to VCAT over a defunct permit condition, it could just delete that condition, put a line through it and not spend our money on fighting PAC over something that no longer exists. Please MPSC, listen to peninsula ratepayers. Do not waste more of our money on this senseless pursuit. Paul Mercurio, Tyabb

Event applauded I’d like to commend the organisers of the recent music event among the lovely grounds of The Briars property, Mount Martha (“Feedback a part of noise review” The News 26/2/20). The event showcased Carl Cox and Eric Powell, world renowned DJs who are also local residents. The day was well managed with first aid, security, free water and food trucks making for a fabulous family friendly event enjoyed by thousands of locals and visitors. I’d also like to commend Mornington Peninsula Shire for permitting the event on the public lands at The Briars. I’m a regular visitor to the property and enjoyed seeing it being used for a concert. It really was quite stunning setting to enjoy the music. While I wouldn’t like to see events like this every weekend, I feel it is a positive addition to the range of events hosted at The Briars over the year. Paul Wittwer, Mornington

Rethink Centrelink Centrelink was established in 1996 as a one stop shop for Australians to access government services (“Agency ‘solution’ for Centrelink” The News 25/2/20). By outsourcing, reducing access to 15 hours a week, the Morrison government

has shown its contempt to Australians wanting to access its services. How does the Health Minister [Flinders MP Greg Hunt] see this as helping people in need when Centrelink staff are having difficulty in implementing government policies and changes? Asking community groups to interpret and implement Centrelink and give Australians the services they require needs further consideration. John Tingiri, Mornington

Privatisation by stealth [Flinders MP] Greg Hunt is sadly mistaken if he thinks that the paltry skeleton service he’s been able to secure by privatising Centrelink and Medicare services for the most disadvantaged in the Mornington area is a great achievement (“Agency ‘solution’ for Centrelink” The News 25/2/20). This privatisation by stealth is a typical LNP government strategy to eventually destroy the last vestiges of a commonly owned social security net. If all the Labor opposition has to say about this is “the community was short changed”, I think Australians needing support from our social security networks are being sold down the creek. It is a disgrace for our health minister [Mr Hunt] to basically go along with this most regrettable decision by pretending he has reached a good outcome for the disadvantaged in the Mornington region. People should be very worried, because eventually everyone sooner or later will end up using these services for one reason or another. It seems the government is still hanging on to the illusion of a budget surplus at any cost. Rupert Steiner, Balnarring

Well done Hunt We should be extremely proud of the actions of our local member, [Flinders MP] Minister for Health, Greg Hunt over the past six to eight weeks. Greg’s handling of the coronavirus has been exemplary, measured, considerate and restrained. This is in distinct contrast to certain commentators and politicians who have attempted to create mass hysteria - well done Greg. Bill Holmes, Sorrento

Rail against racism Thank you “our ABC” for recently screening The Australian Dream. What an amazing documentary hosted by Stan Grant, telling Adam Goodes’s harrowing story of racial vilification while playing AFL football. A double Brownlow medallist and a former Australian of The Year, I urge people who haven’t seen the documentary to seek it out and watch it. Everyone, I think, will be as deeply moved as I was by his story. We need to think of the trauma of continued inequality, vilification that continues in this

wealthy nation to our First Nations people and other minorities and address it now. Australians stand up against racism we can and must do better. Denise Hassett, Mt Martha

Look again at 5G Peer reviewed scientists, engineers and doctors globally are all very concerned about 5G (“$9m ‘5G is safe’ message” The News 25/2/20). More than 2000 scientific research papers have been published on EME (electromagnetic energy emissions) with concerns on biology and health. Effects include increased cancer risk, cellular stress, increase in harmful free radicals, genetic damage, structural and functional changes in reproductive system, learning and memory deficits, neurological disorders and negative impacts on general wellbeing. And now $9m of taxpayers’ money is being spent to convince us there is no harm. Remember when they told us that asbestos, cigarettes, DDT, leaded petrol and paint and herbicides were safe? All are now known carcinogens. Just because it’s invisible, doesn’t mean EMEs are safe. Flinders MP and Health Minister Greg Hunt, who has a duty of care to Australians, should explain why so-called safe limits in Australia are thousands of time higher than most other countries and have not even been tested by the Australian Radiation Protection and Nuclear Safety Agency? Why are other countries, states and councils calling for a halt to 5G until it is proven safe? Why are no insurance companies insuring for EMR-related sickness? Why we are not using the “precautionary principle” until 5G is proven safe by peer reviewed scientists, not science paid by the telco industry which, of course, will cherry pick? There are safe ways to still use technology, so I ask Mr Hunt to look into this and not just sign off on it because it’s great for the economy. Judy O’Donnell, Mount Martha

Knitters needed Sincere thanks to those generous donors of knitting wool for the Winter Woollies Appeal. Wool has come from individuals and organisations. Now, as autumn presents its cooler self, we need knitters to turn those diverse donations into scarves (footy themes welcome) beanies, mittens and jumpers for older children. The knitted garments go first to Southern Peninsula Food for All, then St Vincent de Paul Mornington Peninsula Conferences, to be distributed to needy local families. Our thanks also and most importantly, to the Hastings and Dromana branches of the Bendigo Bank, where staff are kind enough to hold wool for knitters and finished items to be collected. Fran Henke, co-ordinator Winter Woollies Appeal, Hastings

Leftist lists beliefs I’m a lefty and I don’t hate the flag, in fact, I fought under it in Vietnam. I have nothing against the national anthem, but I dislike those who deny the first Australians the right to exist or have a say. I don’t hate those who have worked hard and are now gathering the fruits of

their toil (“Tax for socialism” Letters 25/2/20). What I don’t like are those who can afford a creative accountant to enable them to not pay the correct taxes. I agree that Immigration has to be measured, but I find it criminal that we incarcerate those who want to escape oppression only to be imprisoned for years in detention camps. I don’t like mining giants because of their pollution, but mainly I dislike it when governments gift millions of litres of our precious water resources to them. Balaclava wearers are extreme right wing racists when they’re attacking Muslims over something. I don’t hate farmers, we need them. A socialist federal Labor government shielded Australia from the GFC. Many LNP supporters are still in denial on that one. Socialism is all inclusive, the LNP is exclusive, and we’ve all seen what communism is about. The leaders and their backers take the cream and the masses can take a jump. A bit like the LNP really. John Cain, McCrae

Action required Taking to heart that letters should be more humorous, here are some one liners that should have you rolling on the floor busting a gut. The federal government: Ensures large companies pay tax. Eliminates $29 billion corporate welfare program to fossil fuel industry. Changes tax structure to collect more in tax revenue on liquid gas sold to Japan than Japan collects. Demands that News Corp justify the results for the Foxtel $30 million government handout (another sports rort). Makes another change in submarine propulsion from nuclear to diesel (very quiet and full of sleuth) and now to coal fired. Strengthens Greens ICAC bill and votes to pass it. Recognises all religions and ensures all faiths are represented in chaplains’ program. Improves inequity to the point that those who will spend the money get it and those who will bank it overseas do not. Allocates program dollars to those who need it and not to allocate our tax dollars based on where it is needed to win an election. Apologises for illegal robodebt scheme and gives restitution for victims. Solves homelessness by ensuring everyone has somewhere to sleep besides a detention centre. Ensures that the 3.6 million Australians - including one in five children that have been ‘food insecure’ - are no longer “food insecure”. Closes tax loopholes that allow millionaires in to manage a tax bill of $0. Accepts that it has a duty of care for welfare recipients even though social security law makes no mention of a need to exercise “due or reasonable care”. Takes on board findings of 11,000 scientists and bases actions on science not corporate mafia lobby groups who contribute money to campaigns. Joe Lenzo, Safety Beach