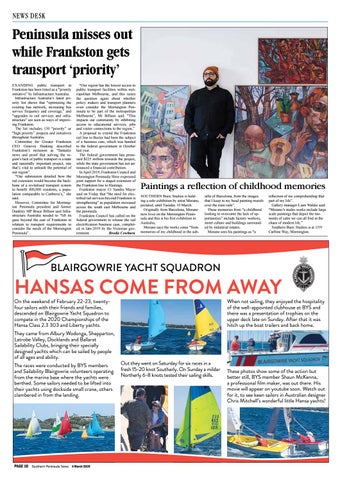 Peninsula misses out while Frankston gets transport ‘priority’ EXANDING public transport in Frankston has been listed as a “priority initiative” by Infrastructure Australia. Infrastructure Australia’s latest priority list shows that “optimising the existing bus network, increasing bus service frequency and coverage,” and “upgrades to rail services and infrastructure” are seen as ways of improving Frankston. The list includes 150 “priority” or “high priority” projects and initiatives throughout Australia. Committee for Greater Frankston CEO Ginevra Hosking described Frankston’s inclusion as “fantastic news and proof that solving the region’s lack of public transport is a state and nationally important project, one that’s vital to unleash the potential of our region”. “Our submission detailed how the rail extension would become the backbone of a revitalised transport system to benefit 400,000 residents, a population comparable to Canberra’s,” she said. However, Committee for Mornington Peninsula president and former Dunkley MP Bruce Billson said Infrastructure Australia needed to “lift its gaze beyond the east of Frankston in relation to transport requirements to consider the needs of the Mornington Peninsula”.

“Our region has the lowest access to public transport facilities within metropolitan Melbourne, and this raises the question again about whether policy makers and transport planners even consider the Mornington Peninsula to be part of the metropolitan Melbourne”, Mr Billson said. “This impacts our community by inhibiting access to educational services, jobs and visitor connections to the region.” A proposal to extend the Frankston rail line to Baxter had been the subject of a business case, which was handed to the federal government in October last year. The federal government has promised $225 million towards the project, while the state government has not announced a financial contribution. In April 2019, Frankston Council and Mornington Peninsula Shire expressed joint support for a staged extension of the Frankston line to Hastings. Frankston mayor Cr Sandra Mayer said on Friday that “the need for electrified rail services beyond Frankston is strengthening” as population increased across the south east Melbourne and the peninsula. Frankston Council has called on the federal government to release the rail electrification business case, completed in late-2019 by the Victorian government. Brodie Cowburn

Paintings a reflection of childhood memories SOUTHERN Buoy Studios is holding a solo exhibition by artist Morano, pictured, until Tuesday 10 March. Originally from Barcelona, Morano now lives on the Mornington Peninsula and this is his first exhibition in Australia. Morano says the works come “from memories of my childhood in the sub-

urbs of Barcelona, from the images that I keep in my head painting murals over the train rails”. These memories from “a childhood looking to overcome the lack of opportunities” include factory workers, street culture and buildings surrounded by industrial estates. Morano sees his paintings as “a

reflection of me comprehending that part of my life”. Gallery manager Liam Waldie said: “Morano’s studio works include large scale paintings that depict the moments of calm we can all find in the chaos of modern life.” Southern Buoy Studios is at 1/19 Carbine Way, Mornington.

HANSAS COME FROM AWAY On the weekend of February 22-23, twentyfour sailors with their friends and families, descended on Blairgowrie Yacht Squadron to compete in the 2020 Championships of the Hansa Class 2.3 303 and Liberty yachts.

They came from Albury Wodonga, Shepparton, Latrobe Valley, Docklands and Ballarat Sailability Clubs, bringing their specially designed yachts which can be sailed by people of all ages and ability. The races were conducted by BYS members and Sailability Blairgowrie volunteers operating from the marina base where the yachts were berthed. Some sailors needed to be lifted into their yachts using dockside small crane, others clambered in from the landing.

When not sailing, they enjoyed the hospitality of the well-appointed clubhouse at BYS and there was a presentation of trophies on the upper deck late on Sunday. After that it was hitch up the boat trailers and back home.

Out they went on Saturday for six races in a fresh 15-20 knot Southerly. On Sunday a milder Northerly 6-8 knots tested their sailing skills.

These photos show some of the action but better still, BYS member Shaun McKenna, a professional film maker, was out there. His movie will appear on youtube soon. Watch out for it, to see keen sailors in Australian designer Chris Mitchell’s wonderful little Hansa yachts!