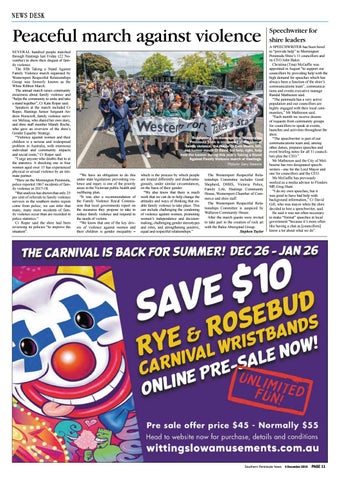 Peaceful march against violence SEVERAL hundred people marched through Hastings last Friday (22 November) to show their disgust of family violence. The fifth Taking a Stand Against Family Violence march organised by Westernport Respectful Relationships Group was formerly known as the White Ribbon March. The annual march raises community awareness about family violence and “helps the community to unite and take a stand together”, Cr Kate Roper said. Speakers at the march included Cr Roper, Hastings Senior Sergeant Andrew Horscroft, family violence survivor Melissa, who shared her own story, and shire staff member Mandy Roche, who gave an overview of the shire’s Gender Equality Strategy. “Violence against women and their children is a serious and widespread problem in Australia, with enormous individual and community impacts and social costs,” Cr Roper said. “I urge anyone who doubts that to at the statistics. A shocking one in four women aged over 15 has experienced physical or sexual violence by an intimate partner. “Here on the Mornington Peninsula, police reported 1867 incidents of family violence in 2017-18. “But analysis has shown that only 25 per cent of referrals to family violence services in the southern metro region come from police; we can infer that many, many more incidents of family violence occur than are recorded in police statistics.” Cr Roper said the shire had been reviewing its policies “to improve the situation”.

Reinforcing the message that Mornington Peninsula Shire is concerned at the level of family violence, the mayor Cr Sam Hearn, left, and former mayor Cr David Gill help, right, help hold the banner during this year’s Taking a Stand Against Family Violence march at Hastings. Picture: Gary Sissons “We have an obligation to do this under state legislation: preventing violence and injury is one of the priority areas in the Victorian public health and wellbeing plan. “It was also a recommendation of the Family Violence Royal Commission that local governments report on the measures they propose to take to reduce family violence and respond to the needs of victims. “We know that one of the key drivers of violence against women and their children is gender inequality –

which is the process by which people are treated differently and disadvantageously, under similar circumstances, on the basis of their gender. “We also know that there is much work that we can do to help change the attitudes and ways of thinking that enable family violence to take place. This can include challenging the condoning of violence against women; promoting women’s independence and decisionmaking; challenging gender stereotypes and roles, and strengthening positive, equal and respectful relationships.”

Speechwriter for shire leaders A SPEECHWRITER has been hired to “provide help” to Mornington Peninsula Shire’s 11 councillors and its CEO John Baker. Christina (Tina) McGuffie was appointed in August “to support our councillors by providing help with the high demand for speeches which has always been a function of the shire’s communications team”, communications and events executive manage Randal Mathieson said. “The peninsula has a very active population and our councillors are highly engaged with their local communities,” Mr Mathieson said. “Each month we receive dozens of requests from community groups for councillors to speak at events, launches and activities throughout the shire. “The speechwriter is part of our communications team and, among other duties, prepares speeches and event briefing notes for all 11 councillors plus the CEO.” Mr Mathieson said the City of Melbourne has two designated speechwriters - one for the Lord Mayor and one for councillors and the CEO. Ms McGuffie has previously worked as a media advisor to Flinders MP, Greg Hunt. “I do my own speeches, but it was good to have had help with background information,” Cr David Gill, who was mayor when the shire decided to hire a speechwriter, said. He said it was not often necessary to make “formal” speeches in local government “because it’s more often like having a chat as [councillors] know a lot about what we do”.