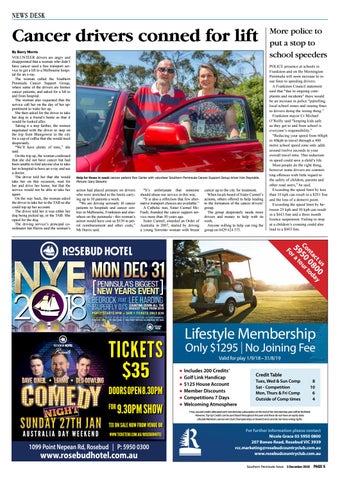 Cancer drivers conned for lift By Barry Morris VOLUNTEER drivers are angry and disappointed that a woman who didn’t have cancer used a free transport service to get a lift to a Melbourne hospital for an x-ray. The woman called the Southern Peninsula Cancer Support Group, where some of the drivers are former cancer patients, and asked for a lift to and from hospital. The woman also requested that the service call her on the day of her appointment to wake her up. She then asked for the driver to take her dog to a friend’s home so that it would be looked after. Taking it a step further, the women negotiated with the driver to stop on the trip from Blairgowrie to the city for a cup of coffee that she would need desperately. “We’ll have plenty of time,” she said. On the trip up, the woman confessed that she did not have cancer but had been unable to find anyone else to take her to hospital to have an x-ray and see a doctor. The driver told her that she would take her on this occasion, wait for her and drive her home, but that the service would not be able to take her again. On the way back, the woman asked the driver to take her to the TAB so she could top up her account. The driver told her it was either her dog being picked up, or the TAB. She opted for the dog. The driving service’s principal coordinator Jan Harris said the woman’s

action had placed pressure on drivers who were stretched to the limits carrying up to 50 patients a week. “We are driving seriously ill cancer patients to hospitals and cancer centres in Melbourne, Frankston and elsewhere on the peninsula - this woman’s action would have cost us $150 in petrol reimbursement and other costs,” Ms Harris said.

“It’s unfortunate that someone should abuse our service in this way. “It is also a reflection that few alternative transport choices are available.” A Catholic nun, Sister Carmel McFaull, founded the cancer support service more than 30 years ago. Sister Carmel, awarded an Order of Australia in 2007, started by driving a young Sorrento woman with breast

cancer up to the city for treatment. When locals heard of Sister Carmel’s actions, others offered to help leading to the formation of the cancer drivers’ group. The group desperately needs more drivers and money to help with its work. Anyone willing to help can ring the group on 0429 624 375.

More police to put a stop to school speeders POLICE presence at schools in Frankston and on the Mornington Peninsula will soon increase to issue fines to speeding drivers. A Frankston Council statement said that “due to ongoing complaints and incidents” there would be an increase in police “patrolling local school zones and issuing fines to drivers doing the wrong thing.” Frankston mayor Cr Michael O’Reilly said “keeping kids safe as they get to and from school is everyone’s responsibility.” “Reducing your speed from 60kph to 40kph to travel through a 400 metre school speed zone only adds around twelve seconds to your overall travel time. This reduction in speed could save a child’s life. Most people do the right thing, however some drivers are committing offences with little regard to the safety of children, parents and other road users,” he said. Exceeding the speed limit by less than 10 kph can result in a $201 fine and the loss of a demerit point. Exceeding the speed limit by between 25 kph and 30 kph can result in a $443 fine and a three month licence suspension. Failing to stop at a children’s crossing could also lead to a $403 fine.

DOWN ALL THE BIGGEST TRAX FROM 2018 SUPERFLY DJ’S COUNTING

TIX ON SALE NOW FROM VENUE OR WWW.TICKETEBO.COM.AU/ROSEBUDHOTEL

^Any unused credits allocated with membership subscription at the end of the membership year will be forfeited. However, Top Up Credits can be purchased throughout the year and these do not have an expiry date. Lifestyle Members cannot win Club Championships or Board Events and do not have voting rights.