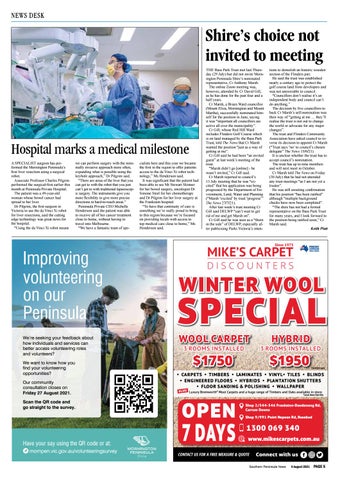 Shire’s choice not invited to meeting

Hospital marks a medical milestone A SPECIALIST surgeon has performed the Mornington Peninsula’s first liver resection using a surgical robot. Associate Professor Charles Pilgrim performed the surgical-first earlier this month at Peninsula Private Hospital. The patient was a 49-year-old woman whose bowel cancer had spread to her liver. Dr Pilgrim, the first surgeon in Victoria to use the da Vinci Xi robot for liver resections, said the cutting edge technology was great news for the hospital. “Using the da Vinci Xi robot means

we can perform surgery with the minimally invasive approach more often, expanding what is possible using the keyhole approach,” Dr Pilgrim said. “There are areas of the liver that you can get to with the robot that you just can’t get to with traditional laparoscopic surgery. The instruments give you more flexibility to give more precise directions in hard-to-reach areas.” Peninsula Private CEO Michelle Henderson said the patient was able to receive all of her cancer treatment close to home, without having to travel into Melbourne. “We have a fantastic team of spe-

Improving volunteering on our Peninsula We’re seeking your feedback about how individuals and services can better access volunteering roles and volunteers? We want to know how you find your volunteering opportunities? Our community consultation closes on Friday 27 August 2021. Scan the QR code and go straight to the survey.

Have your say using the QR code or at: mornpen.vic.gov.au/volunteeringsurvey

cialists here and this year we became the first in the region to offer patients access to the da Vinci Xi robot technology,” Ms Henderson said. It was significant that the patient had been able to see Mr Stewart Skinner for her bowel surgery, oncologist Dr Simone Steel for her chemotherapy and Dr Pilgrim for her liver surgery at the Frankston hospital. “To have that continuity of care is something we’re really proud to bring to this region because we’re focused on providing locals with access to top medical care close to home,” Ms Henderson said.

THE Bass Park Trust met last Thursday (29 July) but did not invite Mornington Peninsula Shire’s nominated representative, Cr Anthony Marsh. The online Zoom meeting was, however, attended by Cr David Gill, as he has done for the past four and a half years. Cr Marsh, a Briars Ward councillor (Mount Eliza, Mornington and Mount Martha), successfully nominated himself for the position in June, saying it was “important all councillors are active all over the municipality”. Cr Gill, whose Red Hill Ward includes Flinders Golf Course which is on land managed by the Bass Park Trust, told The News that Cr Marsh wanted the position “just as a way of getting at me”. Cr Gill said he had been “an invited guest” at last week’s meeting of the trust. “Marsh didn’t go [online] - he wasn’t invited,” Cr Gill said. Cr Marsh reported to council’s 13 July meeting that he was “excited” that his application was being progressed by the Department of Environment, Land, Water and Planning (“Marsh ‘excited’ by trust ‘progress’” The News 27/7/21). After last week’s trust meeting Cr Gill said DELWP “can’t wait to get rid of me and get Marsh on”. Cr Gill said he was seen as a “thorn in the side” of DELWP, especially after publicising Parks Victoria’s inten-

tions to demolish an historic wooden section of the Flinders pier. He said the trust was established nearly a century ago to protect the golf course land from developers and was not answerable to council. “Councillors don’t realise it’s an independent body and council can’t do anything.” The decision by five councillors to back Cr Marsh’s self-nomination was their way of “getting at me … they’ll realise the trust is not out to change the world or advocate for any major changes”. The trust and Flinders Community Association have asked council to reverse its decision to appoint Cr Marsh (“Trust says ‘no’ to council’s chosen delegate” The News 15/6/21). It is unclear whether the trust has to accept council’s nomination. The trust has up to nine members and will next meet in October. Cr Marsh told The News on Friday (30 July) that he had not attended any trust meetings “as I am not yet a trustee”. He was still awaiting confirmation that his position “has been ratified” although “multiple background checks have now been completed”. “The shire has not had a formal representative on the Bass Park Trust for many years, and I look forward to the position being ratified soon,” Cr Marsh said. Keith Platt

Connect with us Southern Peninsula News