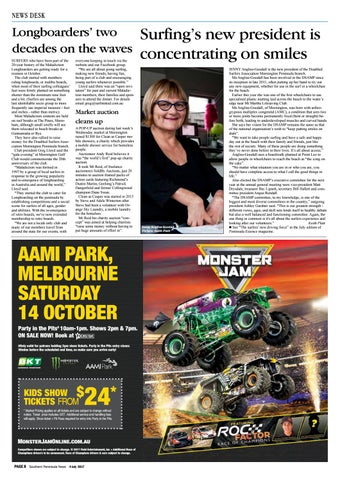 Longboarders’ two decades on the waves SURFERS who have been part of the 20-year history of the Maladiction Longboarders are getting ready for a reunion in October. The club started with members riding longboards, or malibu boards, when most of their surfing colleagues’ feet were firmly planted on something shorter than the minimum nine foot and a bit. (Surfers are among the last identifiable socio group to more frequently use imperial measure - feet and inches - rather than metric). Most Maladiction contests are held on reef breaks at The Pines, Shoreham, although small swells will see them relocated to beach breaks at Gunnamatta or Rye. They have also rallied to raise money for the Disabled Surfers Association Mornington Peninsula branch. Club president Greg Lloyd said the “gala evening” at Mornington Golf Club would commemorate the 20th anniversary of the club. “Maladiction was formed in 1997 by a group of local surfers in response to the growing popularity and re-emergence of longboarding in Australia and around the world,” Lloyd said. “They started the club to cater for Longboarding on the peninsula by establishing competitions and a social scene for surfers of all ages, gender and abilities. With the re-emergence of retro boards, we've now extended membership to retro boards. “We are not a locals only club and many of our members travel from around the state for our events, with

everyone keeping in touch via the website and our Facebook group. “We are all about going surfing, making new friends, having fun, being part of a club and encouraging young surfers whenever possible.” Lloyd said there was an “open invitation” for past and current Maladiction members, their families and sponsors to attend the dinner. For details email greg@surfstoked.com.au

Market auction cleans up A POP-UP auction during last week’s Wednesday market at Mornington raised $1300 for Clean as Casper mobile showers, a charity which provides a mobile shower service for homeless people. Auctioneer Andy Reid believes it was “the world’s first” pop-up charity auction. It took Mr Reid, of freelance auctioneers SoldBy Auctions, just 20 minutes to auction framed packs of action cards featuring Richmond’s Dustin Martin, Geelong’s Patrick Dangerfield and former Collingwood champion Dane Swan. Clean as Casper was started in 2015 by Steve and Adele Winterton after Steve had been a volunteer with Orange Sky Laundry, a mobile laundry for the homeless. Mr Reid his charity auction “concept” was aimed at helping charities “raise some money without having to put huge amounts of effort in”.

* Market Pricing applies on all tickets and are subject to change without notice. Ticket price includes GST. Additional service and handling fees will apply. Show ticket + Pit Pass required for entry into Party in the Pits.

JENNY Angliss-Goodall is the new president of the Disabled Surfers Association Mornington Peninsula branch. Ms Angliss-Goodall has been involved in the DSAMP since its inception in late 2011, often putting up her hand to try out any new equipment, whether for use in the surf or a wheelchair for the beach. Earlier this year she was one of the first wheelchairs to use specialised plastic matting laid across the beach to the water’s edge near Mt Martha Lifesaving Club. Ms Angliss-Goodall, of Mornington, was born with arthrogryposis multiplex congenital (AMC), a condition that sees two or more joints become permanently fixed (bent or straight) before birth, leading to underdeveloped muscles and curved hands. She says her vision for the DSAMP remains the same as that of the national organisation’s wish to “keep putting smiles on dials”. “We want to take people surfing and have a safe and happy day out at the beach with their family and friends, just like the rest of society. Many of these people are doing something they’ve never done before in their lives. It’s all about access.” Angliss-Goodall sees a boardwalk planned at Point Leo to allow people in wheelchairs to reach the beach as “the icing on the cake”. “No matter what situation you are in or who you are, you should have complete access to what I call the good things in life.” Also elected the DSAMP’s executive committee for the next year at the annual general meeting were vice-president Matt Drysdale, treasurer Bec Lipsett, secretary Bill Hallett and committee president Angus Rendall. “The DSAMP committee, to my knowledge, is one of the biggest and most diverse committees in the country,” outgoing president Ashley Gardner said. “This is our greatest strength different views, ages, and skill sets lends itself to healthy debate but also a well balanced and functioning committee. Again, the one thing in common is it's all about the surfers experience and looking after our volunteers.” Keith Platt n See “The surfers’ new driving force” in the July edition of Peninsula Essence magazine.