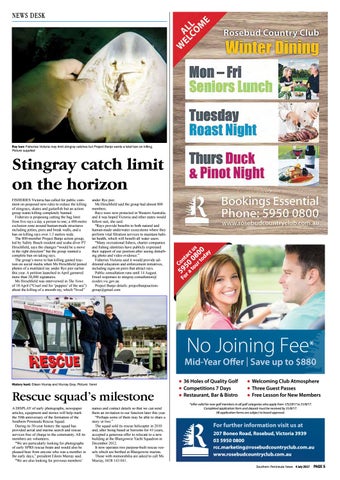 Stingray catch limit on the horizon

under Rye pier. Ms Hirschfield said the group had almost 800 members. Rays were now protected in Western Australia and it was hoped Victoria and other states would follow suit, she said. “Rays provide benefits to both natural and human-made underwater ecosystems where they perform vital filtration services to maintain habitat health, which will benefit all water users. “Many recreational fishers, charter companies and fishing identities have publicly expressed their support of our position after seeing disturbing photo and video evidence.” Fisheries Victoria said it would provide additional education and enforcement initiatives, including signs on piers that attract rays. Public consultation runs until 14 August. Email responses to stingray.consultation@ ecodev.vic.gov.au Project Banjo details: projectbanjoactiongroup@gmail.com

FISHERIES Victoria has called for public comment on proposed new rules to reduce the killing of stingrays, skates and guitarfish but an action group wants killing completely banned. Fisheries is proposing cutting the bag limit from five rays a day a person to one; a 400-metre exclusion zone around human-made structures including jetties, piers and break walls; and a ban on killing rays over 1.5 metres wide. The 800-member Project Banjo action group, led by Safety Beach resident and scuba diver PT Hirschfield, says the changes “would be a move in the right direction” but the group wanted a complete ban on taking rays. The group’s move to ban killing gained traction on social media when Ms Hirschfield posted photos of a mutilated ray under Rye pier earlier this year. A petition launched in April garnered more than 28,000 signatures. Ms Hirschfield was interviewed in The News of 18 April (“Cruel end for ‘puppies’ of the sea”) about the killing of a smooth ray, which “lived”

Rescue squad’s milestone A DISPLAY of early photographs, newspaper articles, equipment and stories will help mark the 50th anniversary of the formation of the Southern Peninsula Rescue Squad. During its 50-year history the squad has provided aerial and marine search and rescue services free of charge to the community. All its members are volunteers. “We are particularly looking for photographs of early SPRS rescue boats and would also be pleased hear from anyone who was a member in the early days,” president Eileen Murray said. “We are also looking for previous members’

names and contact details so that we can send them an invitation to our function later this year. “Perhaps some of them may be able to share a story or two.” The squad sold its rescue helicopter in 2010 and, after being based at Sorrento for 43 years, accepted a generous offer to relocate to a new building at the Blairgowrie Yacht Squadron in December 2012. It now operates two purpose-built rescue vessels which are berthed at Blairgowrie marina. Those with memorabilia are asked to call Ms Murray, 0458 143 041.

*offer valid for new golf members in all golf categories who apply from 1/5/2017 to 31/8/17. Completed application form and deposit must be received by 31/8/17. All application forms are subject to board approval.