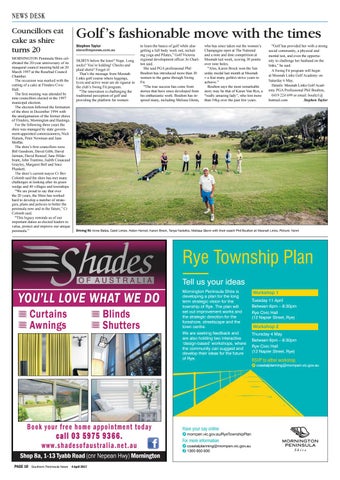 NEWS DESK Councillors eat cake as shire turns 20 MORNINGTON Peninsula Shire celebrated the 20-year anniversary of its inaugural council meeting held on 20 March 1997 at the Rosebud Council Chamber. The occaision was marked with the cutting of a cake at Flinders Civic Hall. The first meeting was attended by nine councillors elected in the 1997 municipal election. The election followed the formation of the shire in December 1994 with the amalgamation of the former shires of Flinders, Mornington and Hastings. For the following three years the shire was managed by state government-appointed commissioners, Nick Hutson, Peter Newman and Jane Moffat. The shire’s first councillors were Bill Goodrem, David Gibb, David Jarman, David Renouf, Jane Hildebrant, John Trantino, Judith Couacaud Grayley, Margaret Bell and Snez Plunkett. The shire’s current mayor Cr Bev Colomb said the shire has met many challenges in looking after its green wedge and 40 villages and townships. “We are proud to say that over the 20 years, the Shire has worked hard to develop a number of strategies, plans and policies to better the peninsula now and in the future,” Cr Colomb said. “This legacy reminds us of our important duties as elected leaders to value, protect and improve our unique peninsula.”

Golf ’s fashionable move with the times Stephen Taylor steve@mpnews.com.au SKIRTS below the knee? Nope. Long socks? You’re kidding! Checks and plaid shirts? Forget it! That’s the message from Moonah Links golf course where leggings, lycra and active wear are de rigueur in the club’s Swing Fit program. “The innovation is challenging the traditional perception of golf and providing the platform for women

to learn the basics of golf while also getting a full body work out, including yoga and Pilates,” Golf Victoria regional development officer Jo Charlton said. She said PGA professional Phil Boulton has introduced more than 30 women to the game through Swing Fit. “The true success has come from stories that have since developed from his enthusiastic work. Boulton has inspired many, including Melissa Glenn,

who has since taken out the women’s Champagne open at The National and a nine and dine competition at Moonah last week, scoring 30 points over nine holes. “Also, Karen Brock won the Saturday medal last month at Moonah – a feat many golfers strive years to achieve.” Boulton says the most remarkable story may be that of Karen Van Ryn, a “really amazing lady”, who lost more than 54kg over the past few years.

Mornington Peninsula Shire is developing a plan for the long term strategic vision for the township of Rye. The plan will set out improvement works and the strategic direction for the foreshore, streetscape and the town centre. We are seeking feedback and are also holding two interactive ‘design-based’ workshops, where the community can suggest and develop their ideas for the future of Rye.

RSVP to either workshop coastalplanning@mornpen.vic.gov.au

Have your say online mornpen.vic.gov.au/RyeTownshipPlan