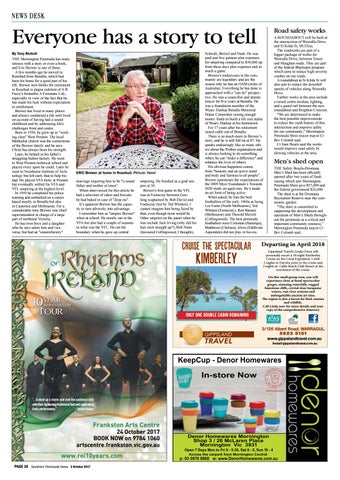 Everyone has a story to tell By Tony Nicholl THE Mornington Peninsula has many retirees with a story or even a book, and Eric Brewer is one of those. A few months ago he moved to Rosebud from Benalla, which had been his home for a good part of his life. Brewer now thinks the retirement in Rosebud is utopia redolent of A B Facey's bestseller A Fortunate Life, especially in view of the fact that he has made his luck without expectation or entitlement. Brewer has lived in many places and always conducted a life well lived on account of having had a sound childhood and by addressing life's challenges front and centre. Born in 1930, he grew up in "working class" West Preston. The local Methodist church was the cornerstone of the Brewer family and he says Christ has always been his strength. Later, he helped in his father's struggling button factory. He went to West Preston technical school and played every sport he could. Later he went to Swinburne Institute of Technology but left early that to help his dad. He played VFA footy at Preston but eventually settled for VFA and VFL umpiring at the highest level. In 1950 he completed his police training and embarked on a career based mostly in Benalla but also in Casterton and Melbourne. For a considerable time Brewer was chief superintendent in charge of a large part of northeast Victoria. He has twin boys and a daughter who he says adore him and vice versa, but had an "unsatisfactory"

ERIC Brewer at home in Rosebud. Picture: Yanni marriage requiring him to be “a sound father and mother at times”. When interviewed for this article he had a selection of cakes and biscuits he had baked in case of "drop ins". It’s apparent Brewer has the capacity to turn adversity into advantage. I remember him as "umpire Brewer" when at school. He mostly ran in the VFA but also had a couple of seasons in what was the VFL. He ran the boundary when he gave up central

umpiring. He finished as a goal umpire at 50. Brewer's first game in the VFL was at Footscray between Geelong (captained by Bob Davis) and Footscray (led by Ted Whitten). I cannot imagine him being fazed by that, even though most would be. Other umpires on the panel when he was include Jack Irving (why did his hair stick straight up?), Bob Nunn (favoured Collingwood, I thought),

Road safety works A ROUNDABOUT will be built at the intersection of Wooralla Drive and St Kilda St, Mt Eliza. The roadworks are part of a bigger package of works for Wooralla Drive, between Tower and Maughan roads. They are part of the federal Blackspot program which aims to reduce high severity crashes on our roads. A roundabout at St Kilda St will also aim to reduce the downhill speeds of vehicles along Wooralla Drive. Further works in the area include a raised centre median, lighting, and a guard rail between the new roundabout and Brighton Crescent. “We are determined to make the best possible improvements to reduce the crash history of this intersection and improve safety for our community,” Mornington Peninsula Shire mayor mayor Cr Bev Colomb said. Cr Sam Hearn said the works would improve road safety by slowing vehicles in the area.

Schwab, Beitzel and Nash. He was paid just five guineas plus expenses for umpiring compared to $50,000 up front these days plus expenses and so much a game. Brewer's endeavours in the community are legendary and are the reason why he has an OAM (order of Australia). Everything he has done is approached with a "can do" perspective. He was a councillor and deputy mayor for five years at Benalla. He was a foundation member of the Weary Dunlop Benalla Memorial Statue Committee raising enough money funds to build a life size statue of Weary Dunlop in his hometown. For 17 years after his retirement raised cattle out of Benalla. There is so much more to Brewer’s story, and he is still full on at 87. He speaks endearingly like so many others about the Probus organisation and is always looking to do something where he can "make a difference" and enhance the lives of others. His obvious happiness comes from “honesty and an active mind and body and fairness to all people”. Brewer epitomises the expectations of the 2009 Myer Foundation’s Towards 2020 study on aged care. He’s made an art form of being active. When asked, he lists the best footballers of the early 1960s as being Les Foote (North Melbourne), Ted Whitten (Footscray), Ron Barassi (Melbourne) and Thorold Merrett (Collingwood). The best peninsula footballers were Coleman (Hastings), Matthews (Chelsea), Alves (Edithvale Aspendale) did not play in his era.

Men’s shed open THE Safety Beach–Dromana Men’s Shed has been officially opened after two years of fundraising which saw Mornington Peninsula Shire give $57,000 and the federal government $26,000. The shed is at the Dromana Recreation Reserve near the community garden. “The shire is committed to supporting the development and operation of Men’s Sheds throughout the peninsula as a critical and important community resource,” Mornington Peninsula mayor Cr Bev Colomb said.

Gippsland Travel’s Linda Owen will personally escort a 10 night Kimberley Cruise on the Coral Expedition 1 with 2 nights in Darwin prior to the cruise and 2 nights at Cable Beach Club Resort at the conclusion of the cruise.

ONLY ONE DOUBLE CABIN REMAINING