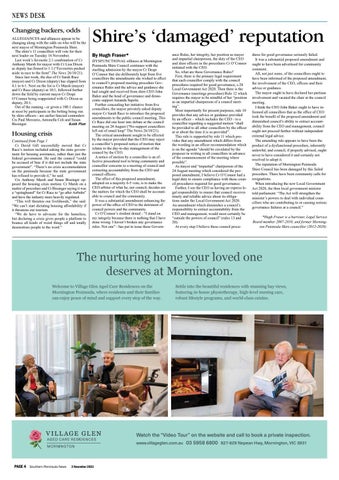 NEWS DESK Changing backers, odds ALLEGIANCES and alliances appear to be changing along with the odds on who will be the next mayor of Mornington Peninsula Shire. The shire’s 11 councillors will vote for their next leader on Tuesday 16 November. Last week’s favourite 2:1 combination of Cr Anthony Marsh for mayor with Cr Lisa Dixon as deputy has firmed to 1:1 (“Favourites pushed aside in race to the front” The News 26/10/21). Since last week, the duo of Cr Sarah Race (mayor) and Cr Dixon (deputy) has slipped from 4:1 to 6:1. Next on the list is Cr Marsh (mayor) and Cr Race (deputy) at 10:1, followed further down the field by current mayor Cr Despi O’Connor being reappointed with Cr Dixon as deputy, 20:1. Out of the running - or given a 100:1 chance at most by participants in the betting being run by shire officers - are earlier fancied contenders Crs Paul Mercurio, Antonella Celi and Susan Bissinger. Keith Platt

Housing crisis Continued from Page 1 Cr David Gill successfully moved that Cr Race’s motion included asking the state government for housing assistance, rather than just the federal government. He said the council “could be accused of bias if it did not include the state government”. “There’s no crisis accommodation on the peninsula because the state government has refused to provide it,” he said. Crs Anthony Marsh and Susan Bissinger opposed the housing crisis motion: Cr Marsh on a matter of procedure and Cr Bissinger saying it was a “springboard” for Cr Race to “go after Airbnbs” and have the industry more heavily regulated. “This will threaten our livelihoods,” she said. “We can’t start dictating housing affordability if it threatens our tourism. “We do have to advocate for the homeless, but declaring a crisis gives people a platform to bounce all kinds of weird things off and totally desensitises people to the word.”

Shire’s ‘damaged’ reputation By Hugh Fraser* DYSFUNCTIONAL silliness at Mornington Peninsula Shire Council continues with the startling admission by the mayor Cr Despi O’Connor that she deliberately kept from five councillors the amendments she wished to effect to council’s proposed meeting procedure Governance Rules and the advice and guidance she had sought and received from shire CEO John Baker and the head of governance and democratic support Amanda Sapolu. Further concealing her initiative from five councillors, the mayor privately asked deputy mayor Cr Sarah Race to introduce the proposed amendments to the public council meeting. This Cr Race did one hour into debate at the council meeting on 24 August (“No-support councillors left out of email loop” The News 26/10/21). The critical amendment sought to be effected by the mayor provided that the CEO may reject a councillor’s proposed notice of motion that relates to the day-to-day management of the council by the CEO. A notice of motion by a councillor is an effective procedural tool to bring community and councillor concerns to a meeting of council and extracting accountability from the CEO and council officers. The effect of this proposed amendment, adopted on a majority 6-5 vote, is to make the CEO arbiter of what he, not council, decides are the matters for which the CEO shall be accountable to council and the community. It was a substantial amendment enhancing the power of the office of CEO to the detriment of council powers and the community. Cr O’Connor’s strident denial - “I stand on my integrity because there is nothing that I have done wrong. I haven’t broken any governance rules. Not one” - has put in issue these Govern-

ance Rules, her integrity, her position as mayor and impartial chairperson, the duty of the CEO and shire officers in the procedures Cr O’Connor initiated with the CEO. So, what are these Governance Rules? First, there is the primary legal requirement that each councillor comply with the council procedures required for good governance, s.28 Local Government Act 2020. Then there is the Governance (meetings procedure) Rule 12 which requires the mayor to be mindful of her “position as an impartial chairperson of a council meeting”. Most importantly for present purposes, rule 10 provides that any advice or guidance provided by an officer – which includes the CEO - to a councillor regarding a suggested motion “shall be provided to all other councillors by the officer at or about the time it is so provided”. This rule is supported by rule 11 which provides that any amendment which differs from the wording in an officer recommendation which is on the agenda “should be circulated by the proposer in writing to all councillors in advance of the commencement of the meeting where possible”. As mayor and “impartial” chairperson of the 24 August meeting which considered the proposed amendment, I believe Cr O’Connor had a legal duty to ensure compliance with these council procedures required for good governance. Further, I see the CEO as having an express legal responsibility to ensure that council receives timely and reliable advice about its obligations under the Local Government Act 2020. An amendment which diminishes a council’s responsibility to extract accountability from the CEO and management, would most certainly be “outside the powers of council” (rules 13 and 20). At every step I believe these council proce-

dures for good governance seriously failed. It was a substantial proposed amendment and ought to have been advertised for community comment. All, not just some, of the councillors ought to have been informed of the proposed amendment, the involvement of the CEO, officers and their advice or guidance. The mayor ought to have declared her partisan involvement and vacated the chair at the council meeting. I think the CEO John Baker ought to have informed all councillors that as the office of CEO took the benefit of the proposed amendment and diminished council’s ability to extract accountability from the CEO and management, council ought not proceed further without independent external legal advice. The amending rule appears to have been the product of a dysfunctional procedure, inherently unlawful, and council, if properly advised, ought never to have considered it and certainly not resolved to adopt it. The reputation of Mornington Peninsula Shire Council has been damaged by this failed procedure. There have been community calls for resignations. When introducing the new Local Government Act 2020, the then local government minister told parliament: “The Act will strengthen the minister’s powers to deal with individual councillors who are contributing to or causing serious governance failures at a council.” *Hugh Fraser is a barrister, Legal Service Board member 2007-2010, and former Mornington Peninsula Shire councillor (2012-2020).

The nurturing home your loved one deserves at Mornington. Welcome to Village Glen Aged Care Residences on the Mornington Peninsula, where residents and their families can enjoy peace of mind and support every step of the way.

Watch the “Video Tour” on the website and call to book a private inspection. www.villageglen.com.au