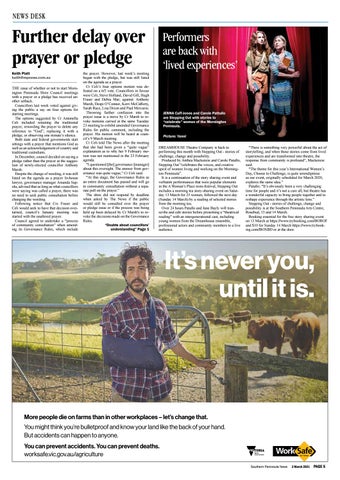 Further delay over prayer or pledge Keith Platt keith@mpnews.com.au THE issue of whether or not to start Mornington Peninsula Shire Council meetings with a prayer or a pledge has received another setback. Councillors last week voted against giving the public a say on four options for starting meetings. The options suggested by Cr Antonella Celi included retaining the traditional prayer; rewording the prayer to delete any reference to “God”; replacing it with a pledge; or observing one minute’s silence. Both state and federal governments start sittings with a prayer that mentions God as well as an acknowledgement of country and traditional custodians. In December, council decided on saying a pledge rather than the prayer at the suggestion of newly-elected councillor Anthony Marsh. Despite the change of wording, it was still listed on the agenda as a prayer In-house lawyer, governance manager Amanda Sapolu, advised that as long as what councillors were saying was called a prayer, there was no need to seek public consultation before changing the wording. Following notice that Crs Fraser and Celi would seek to have that decision overturned, council’s January meeting was started with the unaltered prayer. Council agreed to undertake a “process of community consultation” when amending its Governance Rules, which include

the prayer. However, last week’s meeting began with the pledge, but was still listed on the agenda as a prayer. Cr Celi’s four options motion was defeated on a 6/5 vote. Councillors in favour were Celi, Steve Holland, David Gill, Hugh Fraser and Debra Mar; against: Anthony Marsh, Despi O’Connor, Kerri McCafferty, Sarah Race, Lisa Dixon and Paul Mercurio. Throwing further confusion into the prayer issue is a move by Cr Marsh to revoke motions carried at the same Tuesday 23 meeting to exhibit amended Governance Rules for public comment, including the prayer. His motion will be heard at council’s 9 March meeting. Cr Celi told The News after the meeting that she had been given a “quite vague” explanation as to why her 9 February motion was not mentioned in the 23 February agenda. “I questioned [the] governance [manager] about this oversight. The answer from governance was quite vague,” Cr Celi said. “At this stage, the Governance Rules as an entire document has passed and will go to community consultation without a separate poll on the prayer.” The shire did not respond by deadline when asked by The News if the public would still be consulted over the prayer or pledge issue or if the process was being held up been delayed by Cr Marsh's to revoke the decisions made on the Governance Rules. “Doubts about councillors’ understanding” Page 1

Performers are back with ‘lived experiences’

JENNA Cuff-Jones and Carole Pattullo are Stepping Out with stories to “celebrate” women of the Mornington Peninsula. Picture: Yanni DREAMHOUSE Theatre Company is back to performing this month with Stepping Out - stories of challenge, change and possibility. Produced by Anthea Mackenzie and Carole Patullo, Stepping Out “celebrates the voices, and creative spirit of women living and working on the Mornington Peninsula”. It is a continuation of the story sharing event and verbatim performances that were popular elements in the A Woman’s Place mini-festival, Stepping Out includes a morning tea story-sharing event on Saturday 13 March for 25 women, followed the next day (Sunday 14 March) by a reading of selected stories from the morning tea. Over 24 hours Patullo and Jane Bayly will transcribe and edit stories before presenting a “theatrical reading” with an intergenerational cast, including young women from the Dreamhouse ensemble, professional actors and community members to a live audience.

“There is something very powerful about the act of storytelling; and when those stories come from lived experiences and are transformed into theatre, the response from community is profound”, Mackenzie said. “The theme for this year’s International Women’s Day, Choose to Challenge, is quite serendipitous as our event, originally scheduled for March 2020, explores the same idea.” Patullo: “It’s obviously been a very challenging time for people and it’s not a cure all, but theatre has a wonderful capacity to bring people together and to reshape experience through the artistic lens.” Stepping Out - stories of challenge, change and possibility is at the Southern Peninsula Arts Centre, Rosebud, 13 and 14 March. Booking essential for the free story sharing event on 13 March at https://www.trybooking.com/BOROF and $10 for Sunday 14 March https://www.trybooking.com/BOXBD or at the door.

It’s never you, until it is.

More people die on farms than in other workplaces – let’s change that. You might think you’re bulletproof and know your land like the back of your hand. But accidents can happen to anyone. You can prevent accidents. You can prevent deaths. worksafe.vic.gov.au/agriculture Southern Peninsula News